An artist’s view of the Barbican

An artist’s view of the Barbican

Artist James Sinclair finds the Barbican’s architecture inspirational as far as his painting is concerned.  Some of his Barbican related illustrations, and their context, are set out in the article below.

I have many thoughts and feelings about the Barbican. It is a great place to live, safe, comfortable  and stimulating. But it’s never had a simple impact on me. There is no obvious spectacle that can easily be seen. Though, the more time I spend here, the more I discover that it has a great deal of beauty.

There are great views but they need discovering. There is also quality in the detail. The effort and thought that went into it becomes apparent. And along with the feelings of comfort and safety I have a recurring idea of the Barbican being deserted. The thoughts this triggers vary on time of day, the way in which light and sound interact with the concrete, glass, water and grass. You can pass through the same place any number of times and get very different impressions. I’ve always had these experiences when visiting the Barbican. Probably they started with the walkways. They raise you up from the ground, a safe distance from events below. Once on a walkway there are only really two choices, forward or back. I can focus on the end of the walkway and think about what is around the corner. There is always this idea that you can encounter something. It could be dangerous, the only option is to turn and run.

For me it is all about safe thrills and I want to get them down on paper. Often this is what my illustrations are about, more extreme versions of reality. 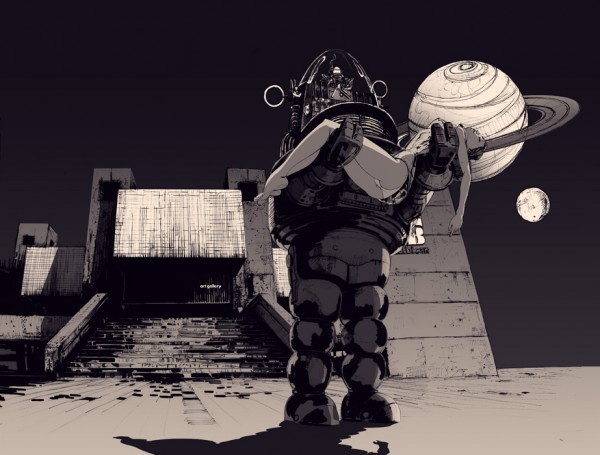 A number of my thoughts about the Barbican stem from the types of movies I grew up watching and the comics I read which were mainly Sci fi and fantasy. Being in the Barbican brings back memories from some of these movies. It is an easy transition; the Barbican looks like an old version of the future. Being so self-contained makes it is easy to imagine that you are in a different place, a different time, an alternate future.

The “Robot” illustration presents one of these possibilities. The Barbican is relocated to a different time and place. The ideas and thinking that led to the  development of the Barbican are from the same period as the movie “The Forbidden Planet”. So I thought that placing the Robot from “The Forbidden Planet” in the Barbican would be a good fit. The movie, alongside its display of really cool technology carries a health warning about the unintended consequences of progress. A civilisation despite its high ideals manages to destroy itself. In the illustration the Robot is carrying a girl away from the gallery. The Robot looks industrial, like it will endure whereas she appears fragile and vulnerable.

Welcome to the Barbican 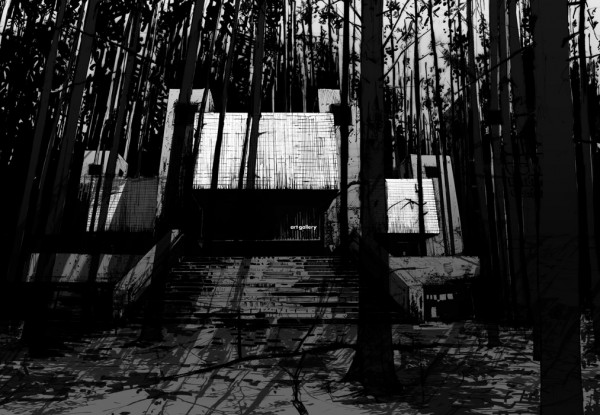 This illustration is a descendant of a series of films, mostly made in the 70’s , which can be  described as lonely man sci fi. They are about the impact of progress on individuals (physically and psychologically isolated); “Silent Running”, “The Omega Man”, “Planet of the apes”.  I keep returning to the main gallery entrance (Shakespeare Tower side) and try to get a grip on what it’s about. If you take away the gallery sign it could be so many things. Broad steps leading up to the gallery but there is no one entering or leaving as the gates are locked by a heavy chain. It feels like someone shut up shop and left. What it will be like one hundred years from now or in a thousand years? Will plants take hold and a forest grow? By giving the gallery back to nature I wanted to give the viewer a feeling of discovery. Now that it’s finished the illustration it keeps reminding me of a lost Cambodian temple. 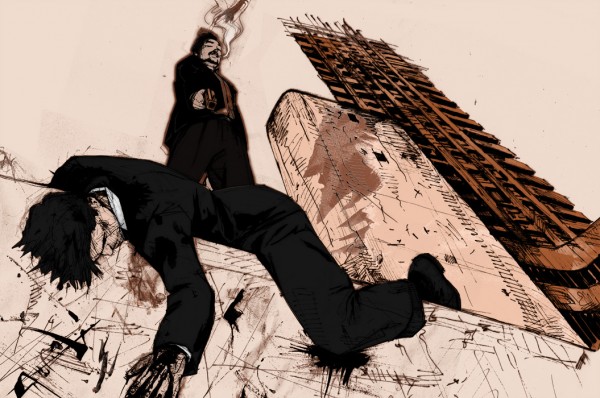 “Exit to Silk Street” is my first attempt to get the towers into an illustration. The towers are fascinating; the curve on the balconies and  the thin edge looks like serrated blade cutting into the sky. How can you not look up and wonder what events are unfolding within them.  In the illustration the towers are in there to add to the drama. The view point is pure comic book, a strong perspective from a worm’s eye view, but this is often the type of view I get on the towers. 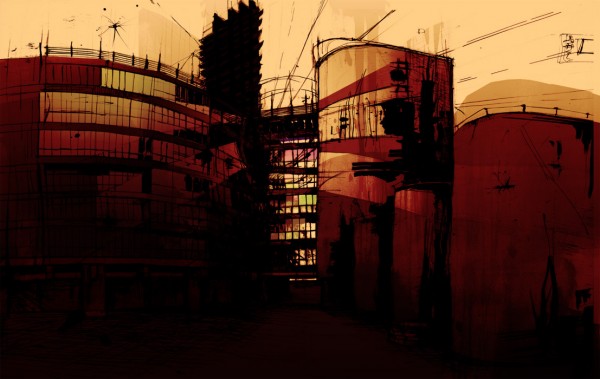 Frobisher Crescent has always been a favourite building of mine. It is immediately pretty. The glass walkways connecting it to other buildings are virtually transparent. They look weightless next to the  concrete. My favourite light for viewing the building is late autumn and early winter, the rich warm light that creates low shadows and great shapes. The nice thing about strong directional light is that it  reveals as much as it hides. Trying to adjust your eyes to the contrast you can miss what is going on in the shadows. The Frobisher building in this type of light is naturally cinematic. With the “Crescent” illustration I wanted to get that sense of warmth, transparency and strong shadows.

Recently I’ve been soaking up the colours of the Barbican interiors; the brass used for hand rails as well as the doors, the brown paint on the notice boards which often looks distressed. There can be red paint breaking through. You could almost stick a frame around these notice boards and put a label on them, as they have the basic elements of Op art. I have been working on a couple of paintings to capture Barbican colours. I’ve  kept them quite abstract; a simple distressed brown background on a red undercoat on top of which I’ve  placed shapes rendered in brass.

What next: things that could have been

The Barbican has variation in its DNA. It’s probably true of all big building projects but I was surprised to discover how many different features such as the elevated road cutting through the Estate, Christopher Wren’s Temple Bar (currently placed in Paternoster Square) or The Coal Exchange Dome  were meant to be here but got sidelined or compromised. If the architects had managed to include Temple Bar and the Dome into the Barbican it would have been quite a spectacle. I’m really curious to see what this Barbican would have looked like so I’m going to illustrate it.