Eating on the Ned’s rooftop

Eating on the Ned’s rooftop

The brand new Ned hotel, which has been opened in the old Grade 1 listed Midland Bank HQ building and which occupies a big area opposite the Bank of England between Princes Street and Poultry, has no less than nine eating options.

The Ned (named after the building’s original architect, Edwin (Ned) Lutyens) is both an exclusive club and a 252 room five star hotel.  (One hopes that Scottish visitors are not put off by the name as Ned is something of a derogatory term north of the border!)  Two of its nine restaurants are only available for use by club members and hotel guests, which is a shame as to this writer these are the two of the hotel’s restaurants which have the best gourmet eating options – although the other seven restaurant areas, spread around the old banking hall, and most utilising the old banking counters as eating counters with tables behind, are proving to be a very popular venue given the hotel only opened at the beginning of May.  (See thened.com website for menu details for all the restaurants.) The building’s Grade 1 listing status, which required the developers keep the original banking hall’s 92 verdite pillars and many metres of banking counters, needed certain compromises to be made and the utilisation of the space as a lobby and very upmarket ‘food court’ is an extremely elegant and practical solution. 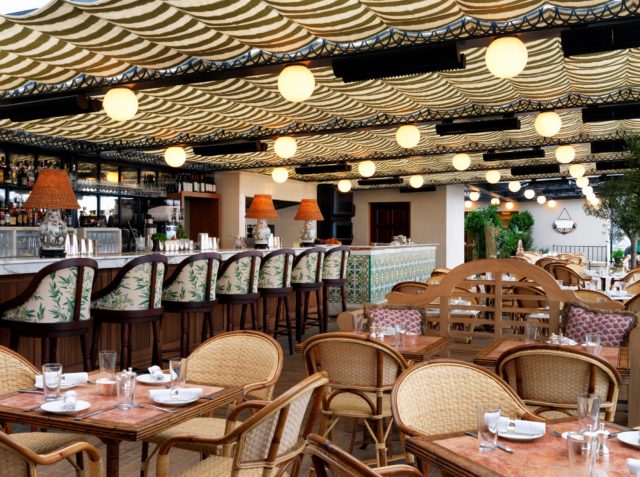 Ned’s Club Upstairs features a retractable roof and heaters so the space may be enjoyed in all weathers.

The editor was given a guided tour of the very impressive and interesting hotel, which will be the subject of a feature article in Barbican Life magazine, and was also invited to dine at one of the exclusive club/hotel guest restaurants.  We chose the rooftop terrace (Ned’s Club Upstairs) for this in the hope that the weather was decent.  In the event it was a little squally, but mostly in sunshine, ideal for an early dinner (we ate at around 6 pm).  We have to say that the views and ambience were great, as was the service and the food, and for a five star hotel one also has to comment that prices of the dishes were reasonable.  It is perhaps a bit of an anomaly reviewing this restaurant here given it is not open to the general public, but perhaps Barbican residents may know hotel guests or club members who might be able to invite them to dine there!

We started with a couple of the specialist cocktails at £10.50.  As to food we began by sharing starter dishes of calamari and octopus both cooked to perfection.  I was a little worried about the kimchi mayonnaise which came with the calamari, but needn’t have been.  It was delicious.  Both starters were at £9. 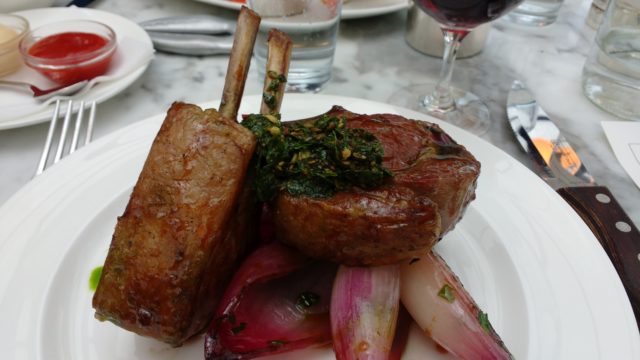 For mains we chose the West Country rack of lamb (beautifully cooked and enormous) at £26 and a good sized whole Native Lobster and chips – £36.  My companion (my wife on this occasion) described this as excellent as she cracked her way through the claws, while I almost had difficulty doing justice to the huge four bone portion of tender lamb rack served medium rare as requested.  I managed to purloin some chips as the serving with the lobster was more than generous! 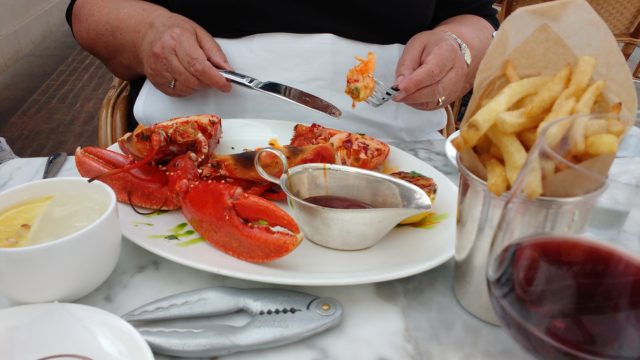 All the dessert options including cheese and biscuits were priced at £8 – the latter a remarkably low cost in particular for the great cheese served – big hunks of stilton, brie and cheddar.  My wife went for the tropical fruit tart – again an excellent choice apparently. 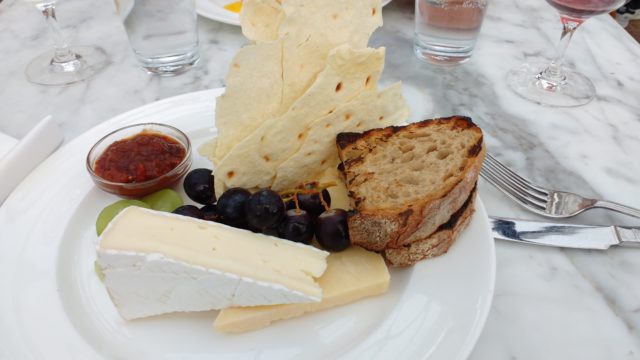 The cheese ( the good-sized hunk of stilton is hidden behind the flatbread.)

Other food options at The Ned

The Ned’s food offerings span the globe, from Britain to Italy, North America to Asia. On the ground floor eight restaurants sit among The Ned’s historic 3,000 square metre former banking hall. Each of the restaurants has its own distinct space, separated by the 92 verdite columns and rows of walnut banking counters. The banking counters have been marble topped and serve as dining counters. The rooftop bar/restaurant, for members and hotel guests only, is the ninth.