We were a little upset to see the demise of Portal in St. John Street – it had been in operation from just after the start of Barbican Life 14 years ago and we recall fondly a couple of good, but not exceptional, meals there as well as two launch and anniversary parties serving excellent canapés and wine.  But in restaurants all good things tend to come to an end and Portal closed down about a year ago and the space has been completely refurbished and re-opened as Luca – the second restaurant from the founders of the hugely successful Michelin starred Clove Club in Shoreditch adjacent to Shoreditch Town Hall. 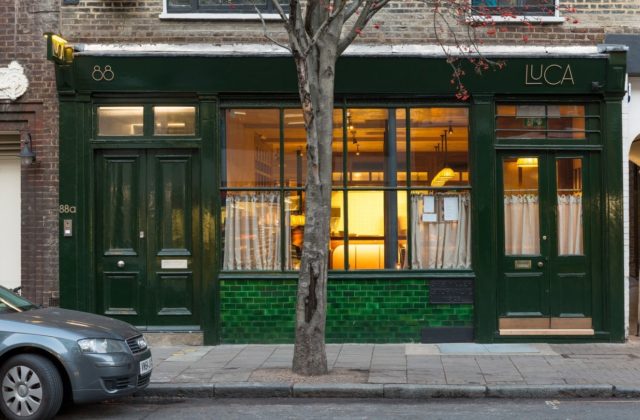 Luca manages to serve Italian style British food – indeed has been described as offering Britalian cuisine.  It promotes itself as serving ‘British ingredients through an Italian lens.’   It looks to be aiming for a Michelin star of its own, but as a result is quite pricey, particularly with respect to the wine list, and independent reviews have not all been over-complimentary. Fay Maschler, for example,  writing in the Evening Standard only gives it three stars (out of five), but was impressed by the décor, although obviously found the restaurant menu perhaps over-expensive, but does like the bar menu options.  Other reviewers concur with this rating with the bar menu seemingly preferred over the restaurant offering – although perhaps that is a function of the price differential.

The emphasis appears to be on ‘Things to share. Small plates. Salads and sandwiches. Camparisoda and freshly shaken cocktails.’ The bar at Luca is a separate space, open for lunch with plates of ham, sandwiches and cakes, and a menu of small plates at dinnertime which can provide a less costly and perhaps more convivial eating option.

The Restaurant serves high quality ingredients from around the British Isles with a focus on pasta. Produce such as Shrimps from Morecambe Bay, Grouse from Yorkshire, Langoustine from Scotland and cheeses from across the country. It, says the restaurant’s own publicity, is food that observes the established traditions of Italian cooking, but breaks the rules a little.

There is a reasonably decent selection of wines available by the glass – but note the small 125ml glass size which appears to be the only option.  Wine by the bottle looks a little on the expensive side starting at £35 for the reds and £26 for a Sicilian white.  The wine list appears to be wholly Italian apart from Champagnes.

A Barbican resident, commenting on the barbicantalk bulletin board, comments thus:  Hopefully we’ll be back to Luca, a good looking restaurant, particularly in the ‘conservatory’ at the back. Food is marketed as ‘Britalian’ … i.e. a pasta course is available, but many of the other dishes could come from any modern British restaurant.  Perfectly competent cooking, but not remarkable.

Perhaps that last sentence will be the nail in the coffin for the Michelin star, but until we’ve tried it ourselves ‘couldn’t possibly comment’