Stephanie takes Lavinia and Olivia for the two/three course set menu to show them what a proper traditional British Sunday lunch is all about.  Nowadays there are many options for Sunday lunches near the Barbican and Hix Oyster and Chop House, close to Smithfield, may well be one of the best.

It’s fair to say that all our family loves sitting together at a big well-stocked Sunday lunch table. There is something different about Sunday lunch compared to other meals. It’s feels like the only time we have to actually relax for a while and glimpse into each other’s lives and we should make time to do it more often.

Hix Oyster and Chop House serves up one of the Barbican area’s best traditional British Sunday lunches. A couple of band members from The Jazz Cats perform, they rotate between some of Mark Hix’s other restaurants so music varies each weekend. 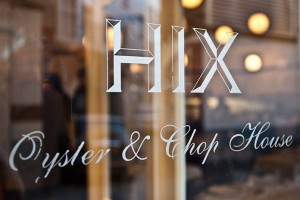 If you have not eaten here the interior preserves the simplicity of the previous 1970s fish restaurant – pleasant brightness, not too big, wood floor, large dark wood bar and white walls. It works, why change it? Mark added antique lights and replaced the white tiles on pillars in the restaurant’s front half. Through the windows Cowcross Street has benefitted from major renovations and the view reflects this.

In case any one is not familiar with Mark Hix he is an experienced chef who owns seven restaurants, writes cookbooks and various newspaper and magazine articles and champions quality, straightforward British food and ingredients that are produced as locally as is reasonably possible.

The set menu consists of two courses for £23.95 or three for £27.95 and offers three choices of starters and desserts with two or three mains. It changes weekly. By the glass wines are more numerous compared to many other restaurants. 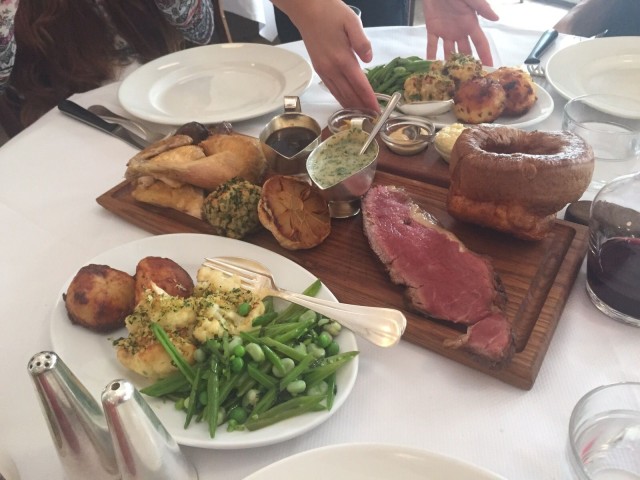 Olivia is a roast chicken eater and tells us that Swainson House farm barn-reared Indian Rock chicken with sage and onion stuffing, served with roast potatoes, broad beans, peas and green beans is succulent and tasty.

Lavinia eats less meat than the rest of us so chooses roast trout with purslane leaves, buttered new potatoes and minted peas with green beans. She enjoys this, though mentions that the trout is just a tad dry and bland for her palette. Olivia and I like it. 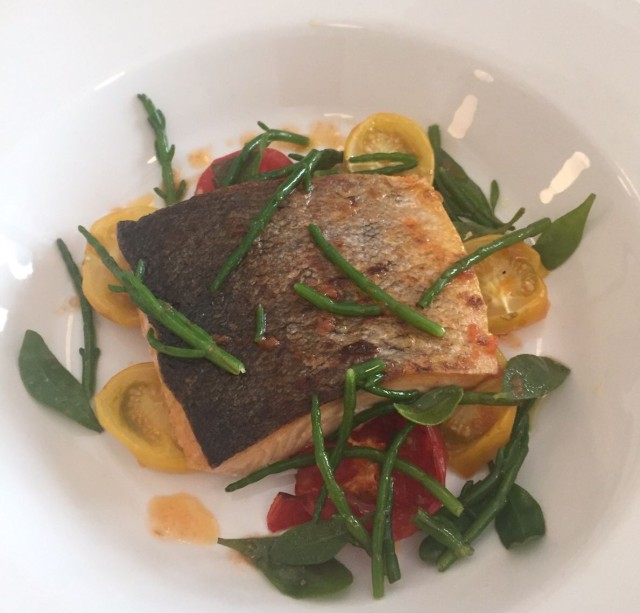 After such a tasty, enjoyable and plentiful meal only one of us (me) has room for their own dessert, Hunter farm raspberry cheesecake, but with three spoons.

Sunday lunch, according to Jay Rayner in a recent Guardian article, “should never be about dainty things positioned just so. It needs heft and commitment.” I thought of this while we were eating. Hix’s Sunday lunch certainly delivers the commitment and the heft is composed of variations – from a thumping good piece of tender sirloin to light whipped broad beans or raspberry cheesecake.

The restaurant is open seven days a week, Sunday to Friday 12noon to 11.00pm (10pm Sundays) and Saturdays 5pm-11pm
The bar is open late Monday to Saturday. 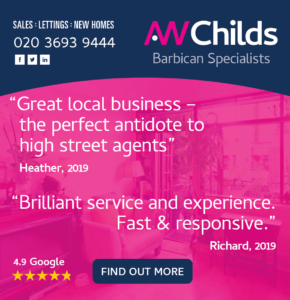