We celebrate the 50th Birthday of the first Residents moving into our Estate this year – but this year Barnebys (the global auction house portal) highlights that it is also the centennial of the Bauhaus movement, an influential school that ushered in a modern and integrated approach to art, architecture and design.

Upon its founding in 1919, the Bauhaus movement revolutionised international modern art and design in the 20th century, from architectural achievements and furniture innovations to developments in fine art and craft textiles. Bauhaus defined a modern style that merged tenets of functionalism and mass production with simple yet beautiful aesthetics, a concept which remains relevant and ubiquitous today. Here is the history of the movement which celebrates its centennial this year. 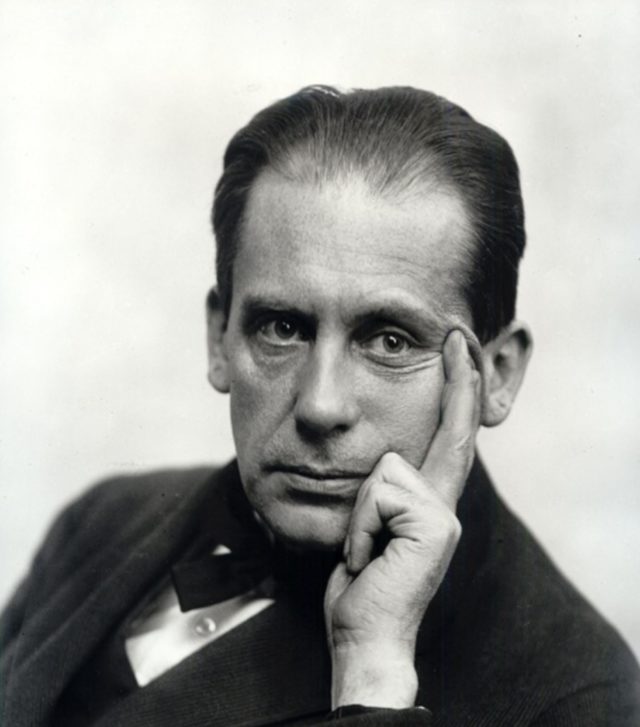 With the end of WWI in 1918 and the installation of the Weimar Republic, creativity, artistic liberation and innovation flourished in Germany. During this new era, architect Walter Gropius founded the Bauhaus (a German term which means ‘building house’) by combining two art schools in Weimar, a city in central Germany in April 1919. In his ‘Proclamation of the Bauhaus’ that year he laid out the mission, principles and curriculum of the school. In that manifesto he wrote, “Let us then create a new guild of craftsmen without the class distinctions that raise an arrogant barrier between craftsman and artist! Together let us desire, conceive, and create the new structure of the future, which will embrace architecture and sculpture and painting in one unity.” 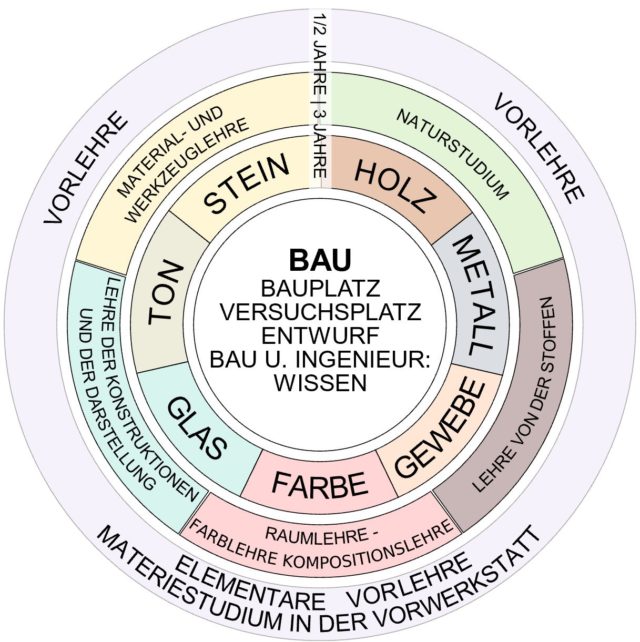 SuperManu [CC BY-SA 3.0 (https://creativecommons.org/licenses/by-sa/3.0)], via Wikimedia Commons.  This conceptual diagram showing the structure of teaching at the Bauhaus was developed by Walter Gropius in 1922.   The ‘building’ [Bau] is at the centre of all the activities.

At the Bauhaus, students were taught by an impressive faculty (many of whom began as students) that included Wassily Kandinksy, Lyonel Feininger, Josef and Anni Albers and Paul Klee. Courses were required in art history, colour theory, anatomy and the science of materials, drawing and painting, and a chosen specialisation in arts and crafts, such as furniture making, pottery, weaving or stained glass. 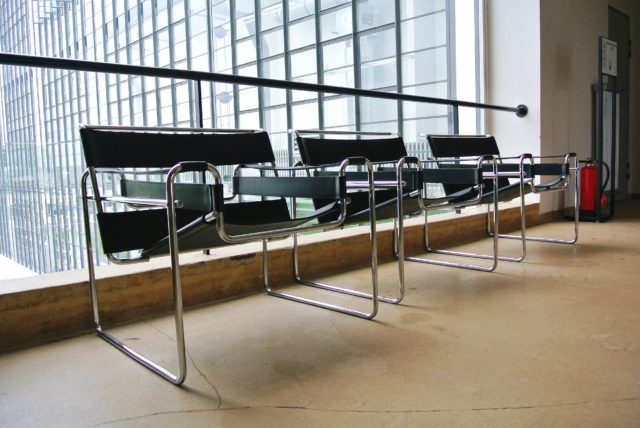 During the 1920s, innovative designs and ideas were churned out of the Bauhaus. Bauhaus alum and teacher Marcel Breur created the iconic Cantilevered and Wassily chairs, in which he minimised the chair to its most essential elements, using leather panels supported by an easily mass-produced steel frame. Herbert Bayer, who studied at the Bauhaus, developed sans-serif typefaces that began to characterise the Bauhaus advertisements and created a distinctly modern text prototype. 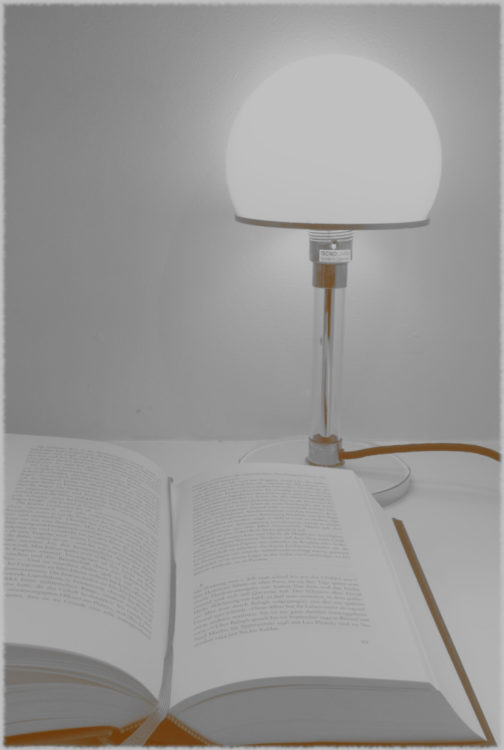 Household items became things of beauty under the Bauhaus, from the half-orb Wagenfeld lamp to Marianne Brandt’s silver teapot. Wilhelm Wagenfeld articulated the design ethos of the Bauhaus, saying that household essentials should be “cheap enough for the common worker and good enough for the rich”. Bauhaus introduced modern design to all classes by embracing the mass-production capabilities and affordable prices enabled by technological advancements.

The Bauhaus wanted to abolish the distinction between fine arts and crafts, a mission achieved in the works of Anni Albers. Albers, also the wife of Josef Albers, studied weaving at the Bauhaus, the only craft specialisation open to women. The school’s emphasis on mass production led Albers to develop woven prototypes that wouldn’t have to be made on the handloom, but still were aesthetically beautiful. She incorporated new materials and patterns in her weaving, becoming a true textile artist, and made the weaving workshop at the Bauhaus into a commercially lucrative success. 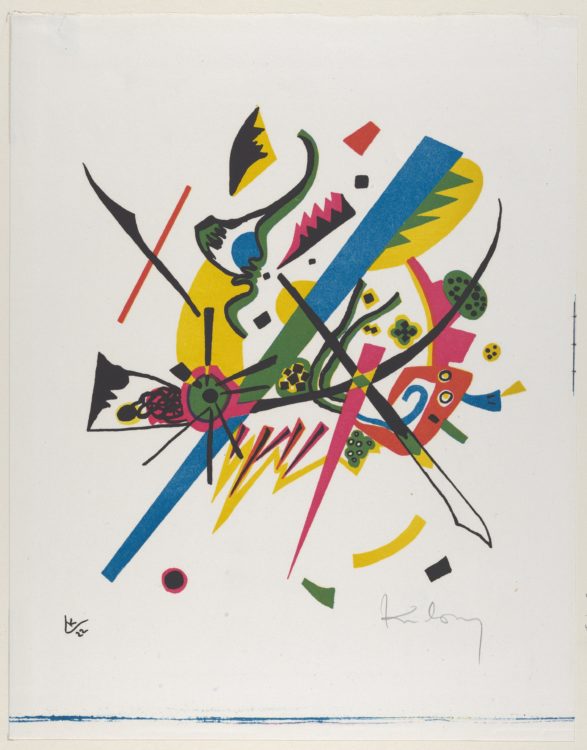 Teaching at the Bauhaus had significant effects upon the works of Kandinsky and Klee, important pioneers of modern art and members of Der Blaue Reiter. There, they further shaped and expanded upon their distinctive styles by focusing on colour theory and incorporating geometric shapes, straight-edged lines and delineated curves in both of their works. 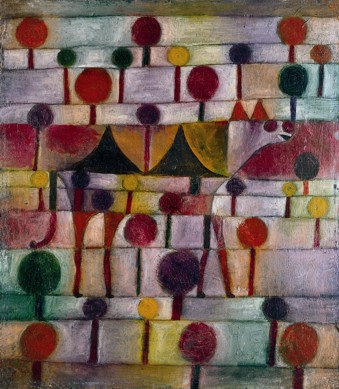 At the Bauhaus, Gropius announced his vision for a new style of architecture. In the wake of a young republic and end of the monarchy, he envisioned a modern aesthetic defined by industrial materials (glass and steel), a simple streamlined design that departed from art nouveau and easy mass production. He thought aesthetics were paramount to design and function and encouraged their integration.

In 1928, Gropius resigned and Hannes Meyer took the helm as head of the school. He was a controversial leader and repositioned the school’s focus more towards functionality and less on form. He departed in 1930 and Gropius nominated Mies van der Rohe as the new head of the Bauhaus. After the Nazi party closed the school in 1931, van der Rohe moved it to an abandoned factory in Berlin. However, conflict continued with the Nazis, who deemed the school socially liberal, degenerate and communist, and it closed permanently in April 1933.

Although the school was shut, its influence quickly spread throughout the world. Many of the Bauhaus students and teachers emigrated from Germany in the 1930s to other European countries, the United States, Canada or Israel. Walter Gropius and Marcel Breuer moved to Massachusetts in 1937 to teach at the Harvard School of Graduate Design, where they continued to collaborate and influence the next generation of modern architects and designers, including their students Philip Johnson and I.M. Pei. Mies van der Rohe moved to Chicago where he led the Second Chicago School, known for steel and glass towers in the city. The Albers’ relocated to North Carolina where they taught at Black Mountain College, which was intended to replicate the Bauhaus as a crafts guild for American artisans. 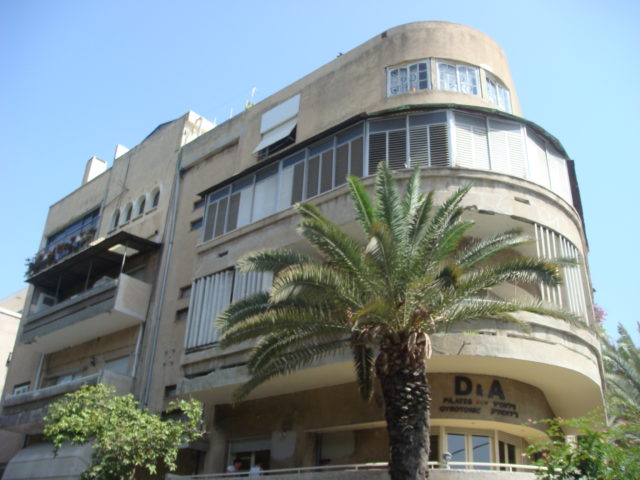 Bauhaus buildings and urban landscape in the White City of Tel Aviv by Lior Golgher 2010 – [CC BY 2.5 (https://creativecommons.org/licenses/by/2.5)], via Wikimedia Commons.

The White City of Tel Aviv, Israel has the largest number of Bauhaus buildings, totaling over 4,000, because many Jewish architects moved to British-controlled Palestine during the rise of the Nazis. It was designated a UNESCO World Cultural Heritage Site in 2003.

The effects of the Bauhaus reverberate well into the 21st century. Gropius’ vision of synthesizing sleek form and function in architecture, furniture, everyday commodities and more can be seen everywhere today, from smartphone and car designs to minimalist décor and urban planning.

Germany will celebrate the Bauhaus centennial this year with museum exhibits, festivals and large-scale projects, including a travelling bus designed by Berlin architect Van Bo Le-Mentzel. Created in the shape of the Gropius-designed Dessau campus, the bus houses a gallery on Bauhaus history and will visit Dessau, Berlin, the Democratic Republic of the Congo and Hong Kong. In addition, two Bauhaus museums will open this year in Weimar and Dessau, the homes of the movement.

Thanks to Jessica Douglas at Barnebys.co.uk for her assistance with this article.