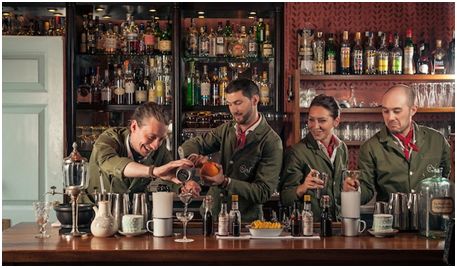 While not exactly ‘restaurant news’ we are sure that The Zetter Town House’s new cocktail masterclasses will be of strong interest to the community in and around the Barbican and further afield.

Since opening in 2011, The Zetter Townhouse, Clerkenwell has become a London cocktail institution, loved by visitors, instantly cast under the spell of the property’s eccentric ancestor, ‘Aunt Wilhelmina’. Bar Manager Matteo Malisan and his team have now announced an exciting programme of cocktail masterclasses for 2015, including special sessions hosted by international drinks authorities David Wondrich and Dave Arnold, as well as Zetter collaborator Tony Conigliaro.

The initial launch masterclass, in late January, was by invitation and was attended by Barbican Life.  If the others follow this pattern, attendees will be in for a very interesting, and alcohol fuelled, event.  The audience was treated to demonstrations and tastings of a half dozen or so of The Zetter’s and The Drink Factory’s special cocktails – including some unusual ingredients – while some attendees got the chance to go up and mix their own cocktails under the tutelage of the experts.  All this with an amusing and informative commentary from the experts involved.

Looking ahead to the commercial elements of the Masterclasses, in March, for the very first time, Tony Conigliaro will team up with David Wondrich, widely hailed as one of the world’s foremost authorities on the history of the cocktail, to co-host two masterclasses, specially curated for The Zetter Townhouse, titled “Old School vs. New School Cocktails”. Wondrich, a resident of New York, is flying in especially for these masterclasses.

In May, The Zetter Townhouse will be joined by drinks legend and founder of David Chang’s New York bar Booker and Dax, David Arnold, for a special masterclass. Author of Liquid Intelligence, David founded The Museum of Food and Drink in New York in 2005.

The Zetter Townhouse Cocktail Lounge is a collaboration between The Zetter Group, Tony Conigliaro (The Drink Factory, 69 Colebrooke Row and Bar Termini) and chef Bruno Loubet. Clerkenwell, once the centre of Dickensian London, was known for its breweries and gin distilleries and the unique recipes that Tony has created for The Zetter Townhouse pay homage to this heritage. Old recipes for tinctures, bitters and herbal remedies have inspired not only the cocktails but also the homemade cordials and infusions that sit behind the apothecary style counter.

Calendar of The Zetter Townhouse masterclasses for 2015:

Each masterclass will last approximately two hours and cost £40-£50 per person. Guests will learn how to make between four to six cocktails, handy tips on cocktail making at home, and as much drink history as they can handle!

Please contact Zetter Events on events@thezetter.com or 020 7324 4401 to book your place at a masterclass.

The 13-bedroom Zetter Townhouse, Clerkenwell, across St John’s Square from its parent Zetter Hotel,  (with a cocktail lounge, Dining Room and Games Room featuring a table tennis table) is crammed full of collectibles, taxidermy and ‘Victoriana’ from ‘Aunt Wilhelmina’s’ travels. The boutique hotel has enjoyed great success from the day it opened its light blue front door in 2011. Some of its awards include: