No – that’s not a description of an unfortunate occurrence at the breakfast table, but a review of an early morning (relatively) visit to one of our newest and closest restaurants which is open for breakfast from 8 am – perhaps unaptly named Bad Egg.  It is located next to Wagamamas in the City Point complex between the Barbican and Moorgate Station.  Indeed it is probably the nearest restaurant geographically to my apartment in the Barbican, although it is run close in this respect by Caterina 55 and City Boot (which is alas not long for this world as it will shortly fall victim to redevelopment.) 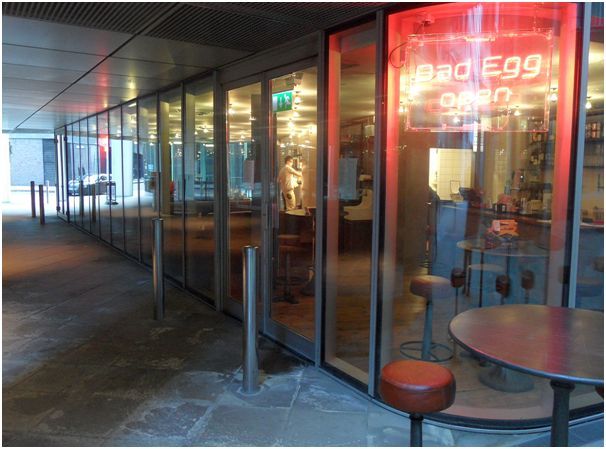 Bad Egg is purportedly a take on an American Diner by Chef Neil Rankin, but with his own ideas on food flavourings which seem to draw on various cuisines from Korean to Moroccan to Mexican, some of which work well by all accounts, but as we went there for breakfast most of what might be called the signature dishes were not on the early morning menu.

Open from 8am for breakfast Monday to Friday, Bad Egg serves tacos, ribs, burgers and a large variety of egg dishes throughout the day.  It is also now open for brunch on Saturdays.

The restaurant is diner style, with comfortable booths along one glass wall and wooden chairs and tables throughout the rest of the space.  We were tempted by Huevos Rancheros (£9), which my companion described as excellent and very tasty.  I had the Full English Breakfast eggs (£8) which I found disappointing.  Both were served in smallish stainless steel bowls (a bit like Balti dishes) with the ingredients mixed together.  The English as served included egg, bacon, black pudding, baked beans and with a hefty dollop of marinara sauce – my disappointment arose from the marinara sauce dominating to the extent that the great flavours which make up the typical English breakfast were completely lost in the sauce.  I would have, to my taste, been better served by ordering the eggs and the sides I wanted, separately, which is an option.  A lesson learned for when I go back. 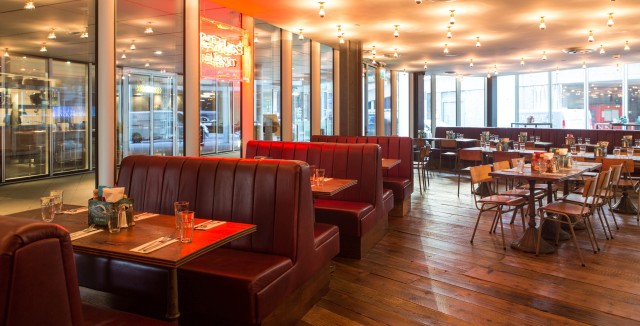 Plus points: The orange juice was freshly squeezed, although a little diluted with a fair amount of ice in the glass, while the coffee was continually topped up as required.  The coffee was good without being great.

By all accounts Bad Egg is particularly busy on weekday lunchtimes.  My breakfast colleague who often passes by the restaurant also commented that its Saturday brunch special which, for a set price of £30 a head  also provides an ongoing supply of bloody Mary’s, mimosas or prosecco over a 2 hour session, as well as the bottomless coffee,  to be imbibed alongside the food, attracts  a virtual full house.  Indeed Olive Magazine, in its review of Bad Egg, described it as ‘The best £30 brunch in London’.

But back to the restaurant itself.  Having breakfast there isn’t perhaps the ideal template for writing an overall review – perhaps I should go back in the evening perhaps.  However there have been some very positive comments on barbicantalk and on other websites – it seems generally to meet with approval from satisfied diners, although one other writer for Barbican Life went there with her husband and was not complimentary at all.  You can’t please all of the people……

Whilst eggs feature heavily on the menu, the real emphasis is on the global flavour combinations, quality ingredients and expert preparation and cooking. Mexican, Korean, Indian, Middle Eastern and Malaysian flavours all play integral roles throughout the menu. The main focus is around Ribs, Burger, Baked Eggs, Hashes and Tacos. 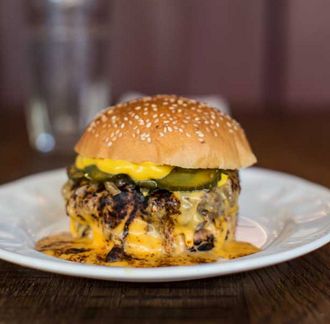 “I took my inspiration from the Chicago diner and emerging fusion scene, but it is unlike anything that is around here in the UK or in the US. There is some downright dirty food on the menu but also a nod towards balanced eating. I’m not saying it’s healthy but you can eat healthily if you like!” says Rankin.

Particular praise from independent reviewers has been generated by the restaurant’s burgers for example, as well as for the ribs and other international diner fare – although the flavour combinations are unlike those served by any other diner I know.

Overall, Bad Egg is reasonably priced for the area – some have commented it is a little expensive, but given the venue location under one of the City’s prime office blocks one suspects overheads don’t come cheap.  As an example of pricing, most main dishes come in at between £8-11.

Bad Egg is at City Point (EC2) where it borders Moor Lane on the west side.  For bookings (almost certainly necessary for Saturday brunch) call 020 3006 6222 or email citypoint@badegg.london.  There is also a limited take-away menu available.  Check out the website – badegg.london– for details