The new list of Michelin starred restaurants has just been published and it looks as though the area within close range of the Barbican, with a couple more local area restaurants achieving Michelin stars for the first time, is fast becoming a Mecca for top class eating experiences. 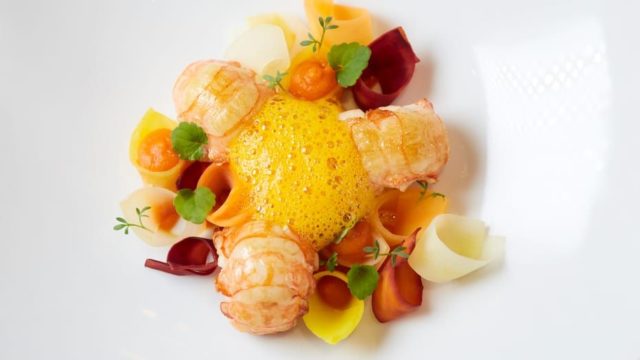 The restaurants achieving Michelin star status for the first time are Mãos in Shoreditch, with one star and La Dame de Pic in the Tower Hill area with two stars.  These join the other local establishments with Michelin Stars – namely Angler (between Moorgate and Liverpool Street), Brat (Shoreditch), City Social in Tower 42, Clove Club (Shoreditch), Club Gascon (Smithfield),  Galvin La Chapelle (Spitalfields), Leroy (Shoreditch), Lyles (Shoreditch) and St. John (Clerkenwell).  Of these you will find full reviews of Angler, City Social and Club Gascon in past issues of Barbican Life and we hope to review some of the others in the future.

We had previously noted here that Shoreditch was home to two of the world’s top 50 restaurants – (Lyles and the Clove Club See:  Two Shoreditch Restaurants in World Top 50) – both within reasonably comfortable walking distance of the Barbican.  But with Michelin stars being among the most sought after restaurant accolades, with the new awards, the area around us gives Barbican residents great scope for top class dining within close range.

Of the two new entries Mãos is a little unusual in that the restaurant comprises a single 16-seat table at which a £150 a head (without drinks) tasting menu is served – no choice – but obviously the food quality impressed the Michelin assessors.  It is located in Redchurch Street, off Shoreditch High Street and was set up by Nuno Mendes of Chiltern Firehouse fame.

The other new Michelin Starred restaurant, La Dame de Pic is a more standard high-end restaurant being located in the five star Four Seasons hotel at 10 Trinity Square in the former Port of London Authority building, and the executive chef is Anne-Sophie Pic, perhaps France’s most celebrated female chef and the most decorated Michelin starred female chef in the world, currently holding eight Michelin stars across her five restaurants.  Her flagship restaurant at Valence in southern France is one of the few restaurants which has been awarded three Michelin stars.  La Dame de Pic offers tasting menus at £90, £120 and £150 a head – and an a la carte menu where you would be hard-pressed to order a 3-course meal for less than £100.  There are more reasonably priced set menu options at lunch time at £32 for two courses and £42 for three courses (with a fourth middle course available brining the price up to £60).