If you are visiting the Geffrye Museum on the Kingsland Road and are looking to perhaps combine the museum visit with a lunch or dinner – or perhaps coffee or a drink,  an excellent new bar/restaurant has opened right opposite the Geffrye’s back door on Geffrye Street under the railway arches next door to Hoxton station.  The restaurant is called Beagle – don’t ask me why, although our waiter came up with a story about an old steam train with that name which used to run through Hoxton station in the past, a factoid borne out by Fay Maschler in the Evening Standard. 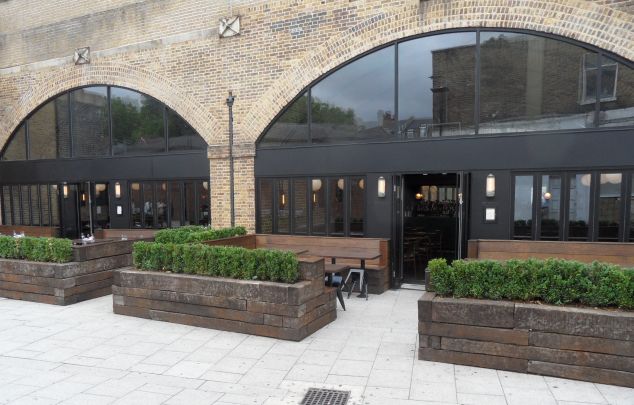 The bar, restaurant and adjoining café is the brainchild of music company krankbrother’s founders, Danny and Kieran Clancy who decided that the three railway arches which now house Beagle, were perfect for what they envisaged as a cool bar/restaurant and certainly to an extent, at least, their vision has been justified.  But no doubt the choice of head chef in James Ferguson, formerly of Rochelle Canteen, and The Connaught and L’Escargot before that, has been a major factor in its initial success.

The food is a take on British cooking and perhaps takes more of a lead from a restaurant like St. John than from high end French or Italian.  Indeed Ferguson says he’s not into chasing Michelin stars – he just doesn’t want to produce that kind of food, although he has the classical training and career path to do so if he wished to.

We ate there on a Friday lunchtime.  It was overcast, but on a warm day at the beginning of August so we decided to sit in the pleasant outside eating area which abuts onto the pedestrianised Geffrye Street .  However, once the sun came out it was almost too hot and there isn’t any shade.  Perhaps it could do with sun umbrellas for the odd sunny days which do occasionally grace us.

Inside the cafe, main restaurant section and bar are within three railway arches.  Arching brick walls, floor made from reclaimed railway sleepers, wooden tables and chairs.  Perhaps a little dark during daytime but apparently really comes to life in the evenings.  Reports suggest the music may be a little on the loud side, particularly given the brick walls and wooden floors which reflect the sound.  It is also apparently rends to be fully booked in the evenings which suggests strong appeal given its slightly out of the way location. 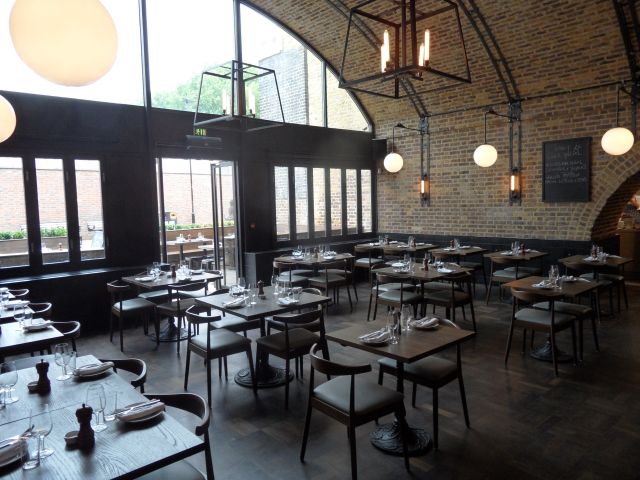 We started with one of the house cocktails each – a bellini with gooseberry and lemon thyme (£8) and sloe gin fizz (£8.50)– they were great and one was in danger of foregoing lunch and just sitting there sipping cocktails through the afternoon, but duty called so we reluctantly ordered a shared starter and our main courses.  The menu at Beagle is limited in terms of the number of options and all the better for that as it means the chef can concentrate on a small number of dishes and prepare them really well.  The menu is supplemented by a couple of £10 daily specials (at least it was on the day we ate there) noted on a board outside – and also inside too.  There was a choice of five starters, ranging in price from £5.50 to £7.50 and we chose a dish of salt ling. chickpeas, garlic and lemon which was very good.

Similarly there was a choice of five main courses, plus the two daily specials.  My companion ordered a whole mackerel, specially marinated (£10) off the daily specials, which she described as absolutely delicious.  I kept with the fish too and went for a whole plaice with kohlrabi, radish and chervil on the side.  Beautifully fresh and perfectly cooked – my only criticism might be that the skin side was a little heavily salted – but then I tend to like heavily salted dishes so for me that wasn’t a problem.  We declined sides – which may have been a mistake, not for quantitative reasons – the fish servings were large – but because I understand that Beagle’s duck fat chips (at £4.50) are brilliant!

We polished the meal off with a couple of desserts and coffee.  My companion had cherry sorbet with prosecco poured over it at the table (£6) – which she could hardly stop talking about.  I had gooseberry fool with a ginger snap (£5) which was very good indeed.  We ordered coffee – espresso and double espresso – so strong you could almost stand a spoon in it.