One problem with being invited to review a restaurant is invariably such invitations come shortly after a new establishment opens and hasn’t had time to settle down.  Thus it’s always valuable to go back and take a second look after say a couple of years, to see what’s changed and to get an idea of its popularity, and that is exactly what we have done with Bird of Smithfield. 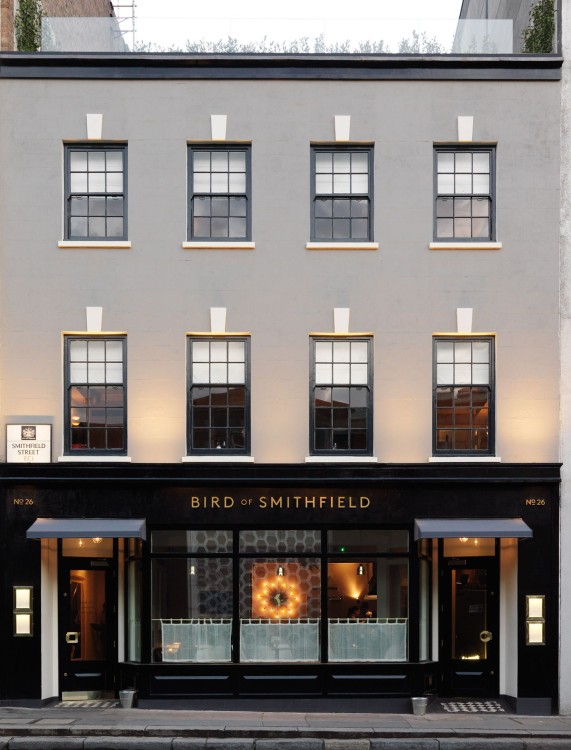 Bird is former Ivy  executive chef Alan Bird’s eponymously named restaurant in Smithfield Street opposite that rather mundane section of the Smithfield market buildings which is reportedly to become the future home of the Museum of London.  It is an unusual building for a restaurant and bar complex being in a narrowish five storey (if one includes basement and roof terrace levels) Georgian townhouse.  The building width precludes large dining areas and Bird thus has to make up for this with various sections of the whole situated on different floors.  Thus, working from bottom to top, there is a basement bar (the Birdcage), a ground floor bar with tables where breakfast and bar food are served, a first floor restaurant , a beautifully decorated second floor event/meeting/private dining room which is apparently extremely well booked,  and the roof terrace above that where bar food may be served at lunchtimes.  Most of these areas could accommodate up to around 50 people seated or standing.

The main restaurant itself on the first floor is a pleasantly bright room decorated with some remarkably varied pieces of art.  It only seats around 50 diners maximum, so well worth booking ahead.  When we were there on a Tuesday lunch time it was just about full so Bird has definitely established itself as a popular venue. 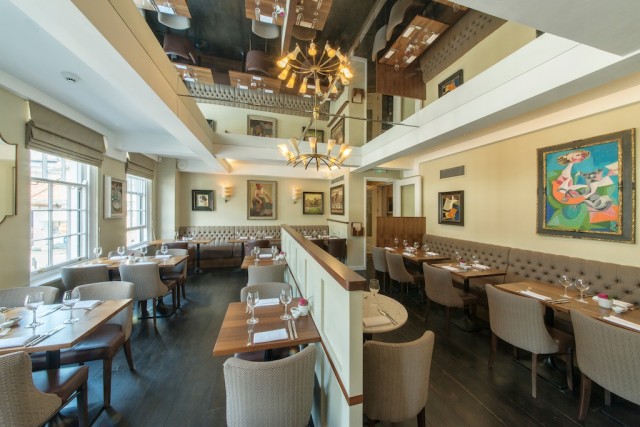 The bright main restaurant on the 1st Floor

The food on offer could perhaps be described as the best of British with regional specialities from across the nation.  So saying, with my two dining companions we ventured into the mouthwatering looking dishes on the a la carte menu – and also on the reasonably priced daily set menu which is available Monday to Wednesday.  Two of us ordered the West Coast Scallops with Jerusalem artichokes, nduja and broad beans, with the nduja giving them a quite spicy kick, off the a la carte menu (a pricey £19 – the most expensive of the starters on offer.  Other starter options ranged from £8 to £14). The third of us a beautifully presented, and by all accounts delightful, pea soup off the set menu where three courses would only set you back £1 more than the scallops in total  – a real bargain. 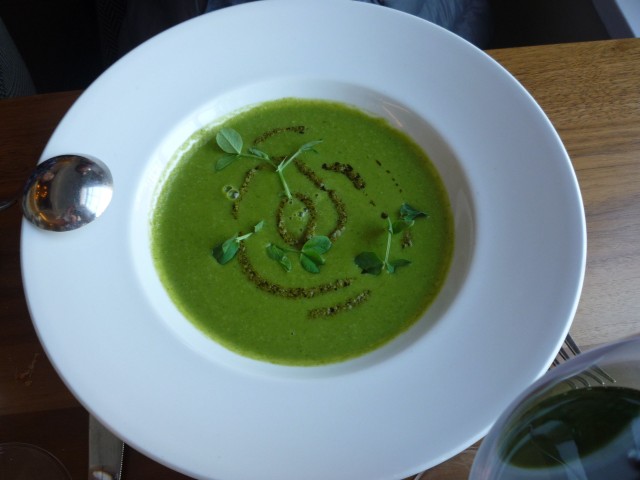 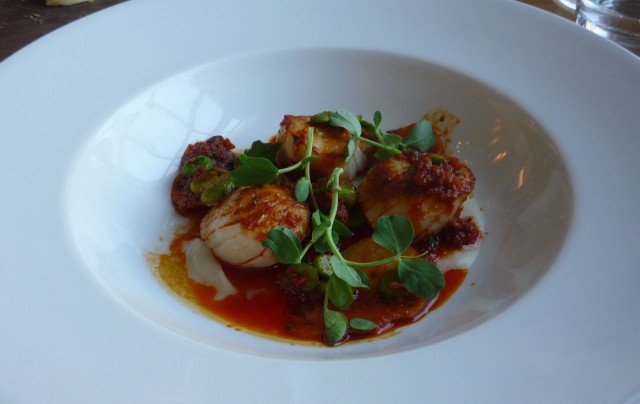 For mains we had, respectively braised ox cheek (£24), monkfish (£24) and Cornish fish cake (again off the set menu).  I went for ox cheek as that was something I hadn’t eaten before and this had obviously been slow cooked for a long time as one could flake it with a fork.  Very tasty and surprisingly, to me, extremely lean meat (which is probably normal, but for a first time eater….).  We ordered Jersey Royal new potatoes on the side (£3.50) which have just come into season.  Appreciative comments from my companions on their dishes which were beautifully served.  Overall mains prices ranged from £14 (vegetarian option) upwards with the ever popular Alan’s shepherd’s pie coming in at £15. 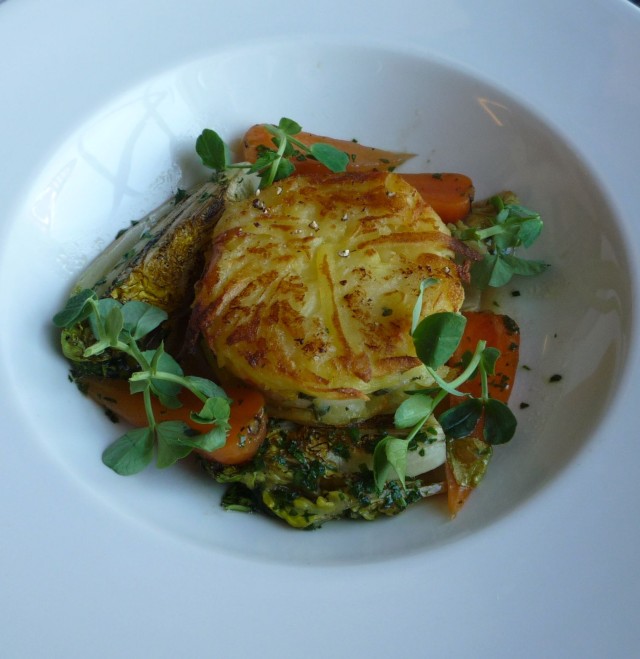 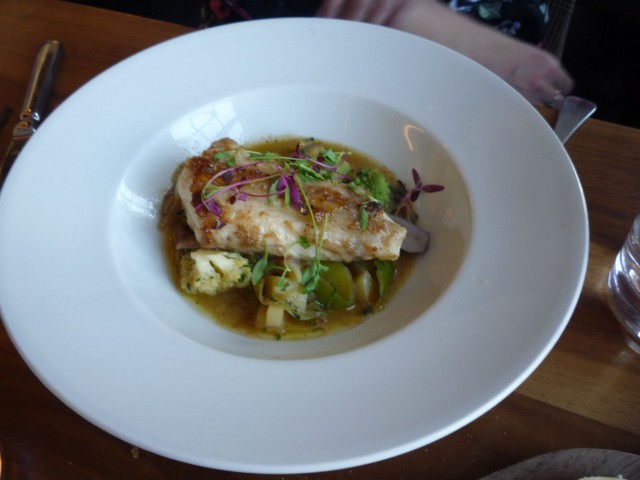 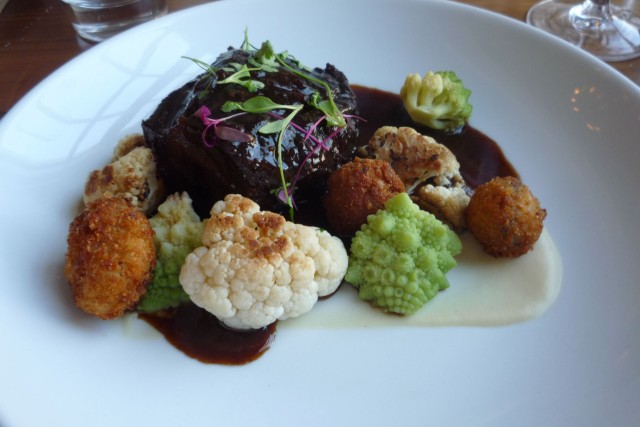 Desserts: we chose two to share between the three of us.  The piéce de resistance had to be a trio of sorbets, all with really intense flavours – lemon, raspberry and perhaps best of all a cucumber and mint ball of flavour and sharpness (£2/scoop).  Quite remarkable.  The other was a Yorkshire rhubarb cheesecake (£8) which, although a rhubarb lover, did not work quite as well for me. 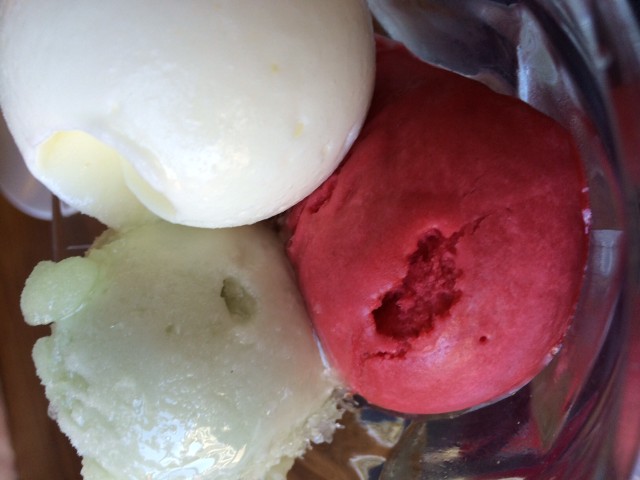 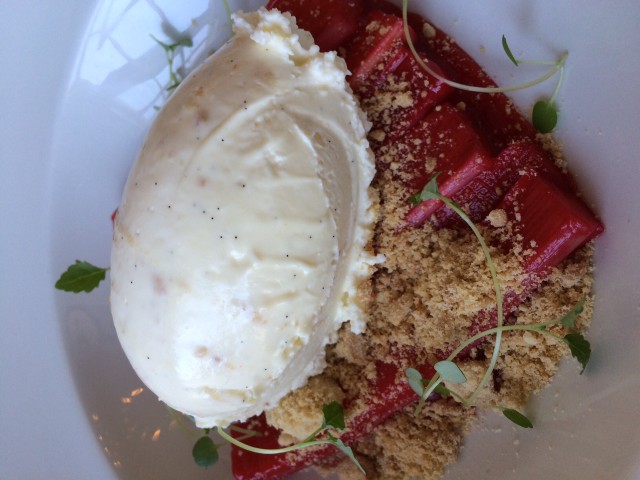 This was all washed down with sparkling water and wines by the glass, of which there is a small, but reasonably diverse, selection.  Wines by the bottle, from again a fairly compact list, range from £19.50 to £130!

Cost for the whole meal, including two glasses of wine each, but excluding 12.5% service, was around £55 a head which, given that two of us chose the most expensive starters and mains, has to be considered reasonable for the area.  Overheads and staff are expensive.  However, of course if one has stuck to the set menu the total cost would have come in at £36 a head of which the beverages would have accounted for around £16 a head.  The moral being if one wants to eat out in London at a reasonably low cost, eschew alcohol – but where’s the fun in that!

So Bird of Smithfield does seem to have established itself as a go-to venue in the Smithfield area, although it could be considered to be located on the less trendy (south) side of the market.

We ended with coffee on the roof terrace where we were lucky to find space, a table and three seats.

By all accounts trade is good throughout the day and evening and the bar menu does look to offer excellent value (burgers from £9-12,  a great variety of baps and sandwiches from £4-10 (I’m told the fish fingers sandwich is truly excellent at £7 if you like that kind of thing), salads from £8-9, etc.  Breakfast (served on the ground floor level from 7.30 to 11.00) also looks to be great value with the full English coming in at £8, eggs Benedict at £5, smoked salmon and scrambled eggs £8, plus many other lower cost options of pastries and cereals, with coffee or tea at £2.  A spicy bloody mary hair of the dog pick me up comes in at £7!  Bird even does a take-away special of coffee and a pastry at £2.