The creation of a memorial to civilian Londoners who lost their lives in London bombings is proposed for the ruined City church of Christ Church, Greyfriars

Designer Ian Heron is putting forward a proposal to create a Memorial in the City to the heroism and sacrifice of Londoners during the Second World War and for those who have died in other bombings here since. The site would be at the ruined City church of Christ Church, Greyfriars, which lies on the Heritage Route from the Barbican to St Paul’s.

The proposal’s aims are twofold – to remedy the injustice that the role of the wartime generation has received inadequate recognition, and to create, by restoring the missing walls of the church, an environmental enhancement of the site which the City and its visitors can be proud of. It is felt that the purpose, and the form the proposal takes, are perfectly matched at the Christ Church site. 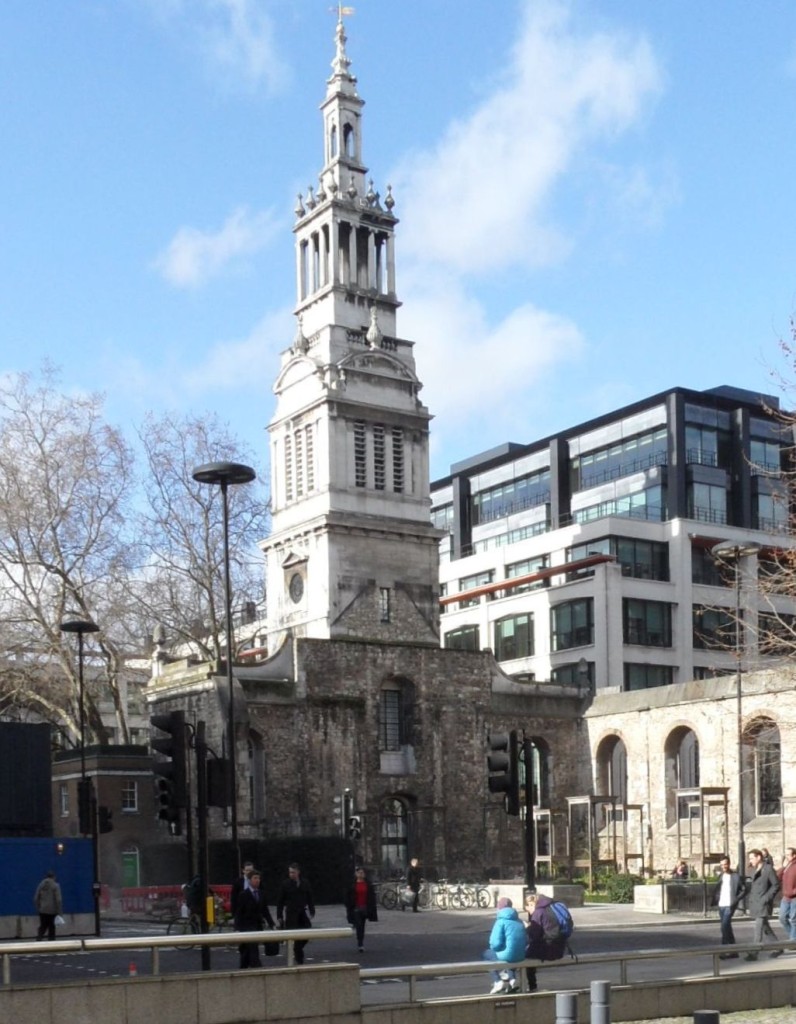 Several influential Members of the City are interested in the proposal, and it seems very likely that, with continued advocacy, it will be considered for inclusion when the environmental future of this area is reviewed in due course.

The remnants of the City church of Christ Church, Greyfriars stand at the corner of Newgate Street and King Edward Street, just across from Paternoster Square and St Paul’s tube station. The steeple is one of Wren’s finest, and is now a private residence, but the rest of this ancient and historic site is owned by the City, and has for too long remained a forlorn and unsightly ruin. 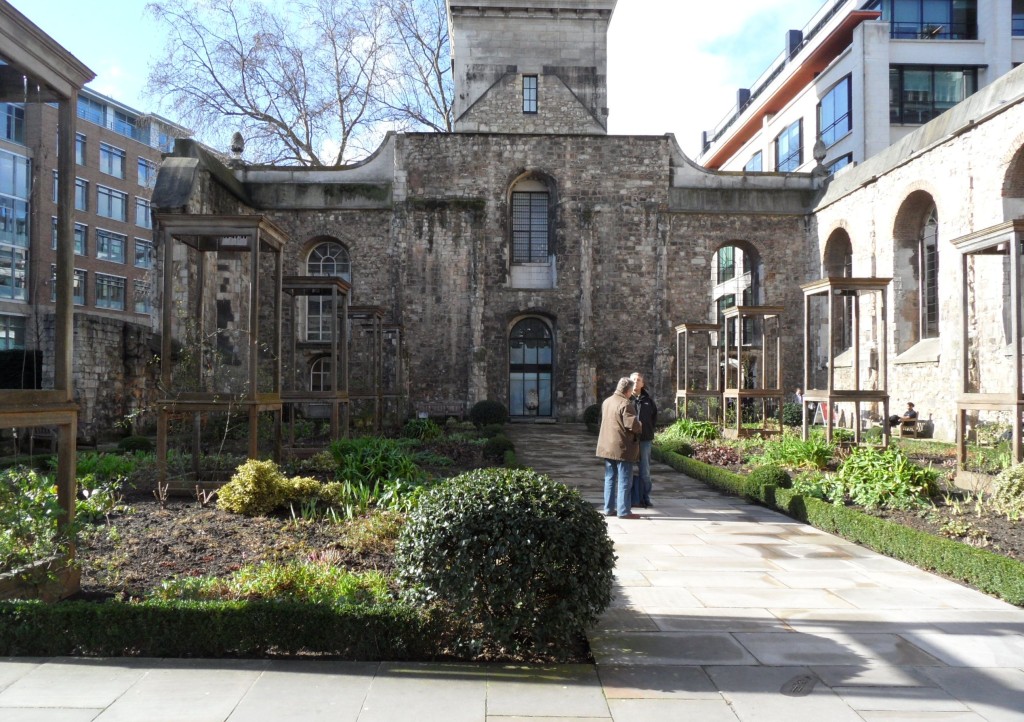 The Christ Church Greyfriars garden as it is today looking west

The aim of a group of Londoners is to transform the site and give it a new purpose – the creation of a memorial of national significance to commemorate the heroism and sacrifice of the citizens of London during the Second World War and in subsequent bombings. It would be called the Citizens’ Memorial, and would bring about the long-overdue recognition of the role of the wartime generation, who, unlike all the armed services, have no memorial of national status. The toll of 28,000 innocent civilians who lost their lives as a result of aerial bombardment surely deserves appropriate recognition in the fabric of the City itself?

Visitors exploring the City of London often make their way from St Paul’s through the restored archway of Temple Bar into the new Paternoster Square, and a little further on arrive at Newgate Street. Across the street stands one of the finest examples of Sir Christopher Wren’s steeples, but little remains of the adjacent church except truncated walls and a garden where the nave once stood.

Christ Church, Greyfriars, was one of Wren’s largest and grandest churches, but was left a shell after being burnt out in the Second World War. After the authorities decided not to restore the church, the ownership of the site was transferred to the City of London. In 1973, a road widening scheme involving King Edward Street was carried out, the shameful consequence of which was the demolition of the east wall, most of the south wall and part of the north wall of the church. A magnificent example of Wren’s work was left disfigured and a piece of streetscape unique to the character of the City was obliterated.

In 2000, with the construction of the adjacent Merrill Lynch Financial Centre, the roads were re-aligned, the pavement of King Edward Street was taken through the church site, and the footprint of the church was reinstated. However, instead of restoring what had been demolished, the position of the missing fabric was marked only by building the low walls we see today, making the ruin incoherent not only to most Londoners, but also to the many visitors who are taken through the ruin as they are guided around the City. However, by putting the pedestrian route through the ruined church, the City also created a unique opportunity. 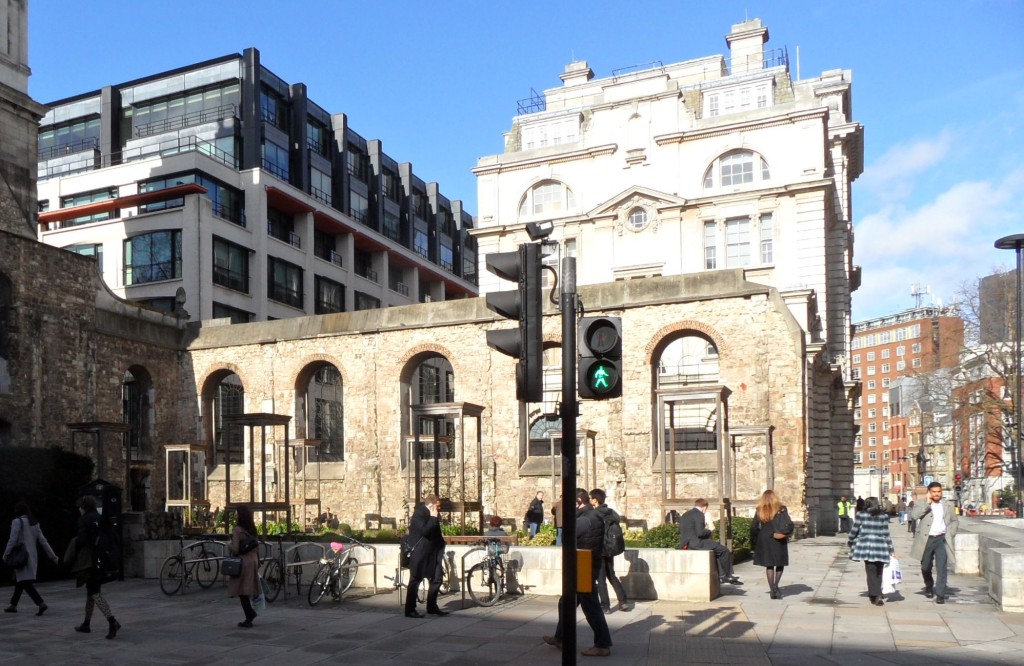 The essence of the Memorial would be the meticulous restoration of the sixth bay of Wren’s church, through which the pedestrian route is now taken. Wren’s dignified classical architecture would create an arcaded walkway, and everyone using it would briefly experience transition through a sacred space as part of an everyday route. Visitors might pause there and learn about the history of the church and purpose of the Memorial, conveyed by inscriptions and sculptured panels installed beneath the windows in the restored East wall. Opposite, memorial gates would give access to the garden, a place of contemplation, peace and delight. The rebuilt walls would reduce the present traffic nuisance in the garden, and with other design measures to improve its amenity and user-friendliness, would give it a new sense of sanctuary and welcome. 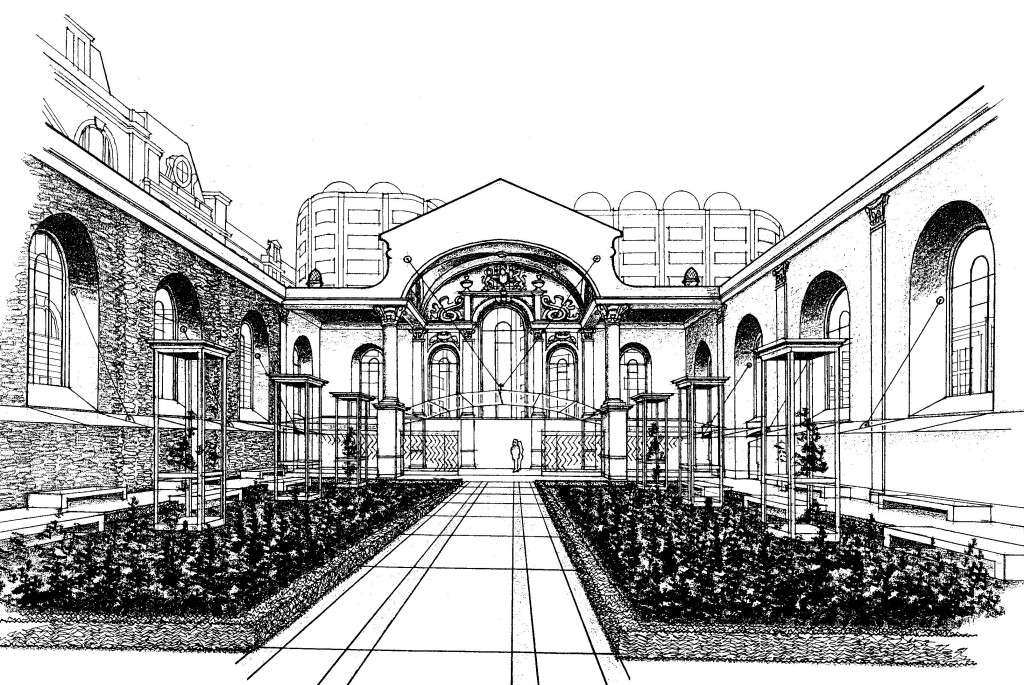 This drawing shows how the garden within Christ Church might look with the elements of the church fabric reconstructed for the Citizen’s Memorial. The view is from a position near the tower, looking east, with Newgate Street on the right. 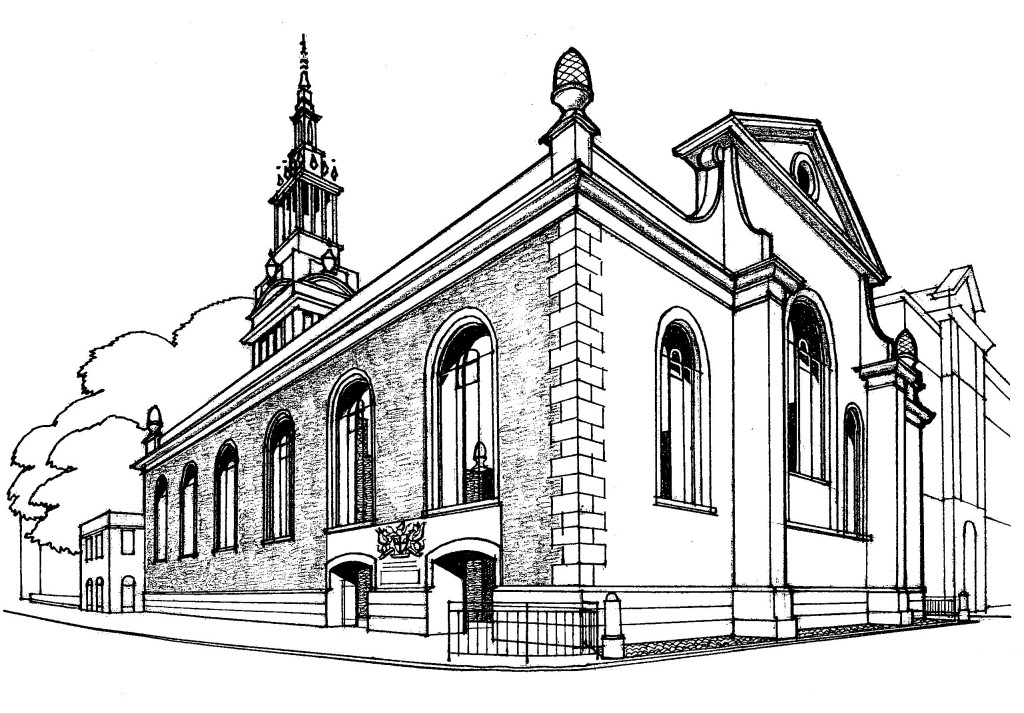 Artists depiction of the exterior of Christ Church after the proposed reconstruction of the missing walls for the Citizens’ Memorial – view from corner of Newgate Street and King Edward Street;  lower right, outline plan at street level

The present scheme is not really a new idea. After the War, when the exterior fabric of the church was still intact, the site was proposed for designation as a war memorial. The Citizens’ Memorial would realise that intention, using the best professional advice and craftsmanship available today. The transformation would mean that visitors could take with them the memory of a truly beautiful and meaningful place of interest. The garden could now also be used as an open-air venue for special events held by the City authorities and others, and would contribute to the Planning Department’s stated aim of promoting ‘place-making’ in the City. The proposal has the support of the senior Member in the Ward of Farringdon Within where the site is located, and has been fully costed – however the City would need to safeguard the site for the purpose before a charity could be established to raise the funds for it, and that is a focus for the scheme’s supporters currently.

The Citizens’ Memorial was at first envisaged as a place specifically dedicated to the fortitude and sacrifice of the civilian population of London during the Second World War. However, recognising that in the subsequent years of peace, our City has witnessed a further number of significant bombing outrages, it seems appropriate to widen its purpose to honour all the Londoners who have been civilian victims of bombings, both in wartime and peacetime, during the modern era.

Christ Church is seen as the the ideal place for such a memorial because of its prestigious location in the City, its architectural and historical importance, its own partial destruction in wartime, and the established and much-valued amenity of its garden. The restored fabric and renewed garden would create a welcoming, dignified and eloquent setting which would do justice to this proud cause.

The proposal described here was initiated by designer Ian Heron in consultation with City guide-lecturers, historians and architects. If you’re not familiar with the site, do visit it and consider whether you would like to see such a proposal realised. The scheme is fully described online at www.thecitizensmemorial.wordpress.com , where there is also an archive of photographs about the history of Christ Church, and opportunities to have your say by posting comments.

You are also welcome to contact Ian Heron directly at  ian.heron@ymail.com with comments and suggestions. He would be delighted to conduct guided visits around the site, either individually or in small groups, if you mention this in your email.

Ian trained in architecture, and after working for a brief time in the profession became a freelance designer within a design co-operative producing themed interiors, initially to the briefs of project architects but eventually as contributing artist/designer.

He has lived in London since 1967, initially very close to County Hall, afterwards in Kennington, and since 1984 in Clapham. He well recalls the time in 1973 when there was a campaign to save the east end of Christ Church from demolition as proposed by the City’s planners – Simon Jenkins played a prominent part – but little did Ian realise then that in due course he would be producing a scheme to restore here a little, but significant, piece of Wren’s work as a memorial to those 28,000 Londoners who lost their lives due to aerial bombardment in World War II and victims of other bombings since.