Article updated with details of the newly appointed Executive Chef and the new menu.

The Devonshire Club is a high-end members establishment which recently opened in one of the old East India Company warehouses and a Georgian townhouse in Devonshire Square. It is also a great 68-room hotel with high quality guest rooms available to members and non-members alike and with its very convenient location is ideal as an overnight, and luxurious, venue for people with business in the City – or anywhere else in London given its proximity to Liverpool Street mainline and underground stations.  This convenience will be further enhanced once the Elizabeth Line (Crossrail) is up and running beginning at the end of the current year. 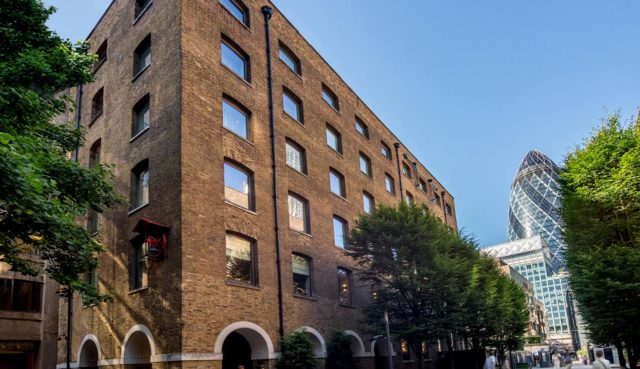 Given that the City used to be something of a hotel desert, the plethora of new hotels which have sprung up in recent years, means that room rate deals are readily available at the moment so it could also be considered an excellent venue for the tourist visiting the City area and East London looking for a touch of luxury at a reasonable rate.

While the club’s excellent restaurant, bar and lesisure/fitness facilities are only open to members and overnight room guests during the week, the bar and restaurant are open to non-members on Friday evenings and at weekends, presumably to increase restaurant foot fall – very noticeable on the Saturday evening when we ate there with only one other table occupied in the big 110 seat restaurant area.  This might be considered an ambience-killer, but not for us given we prefer to eat without distraction and, in any case, the food and service was very good indeed.

Also to attract a weekend clientele the club has launched a weekend brunch option, served from 11.30 am on Saturdays and Sundays and while we only partook of the standard breakfast (more than adequate) on our visit it was noticeable that the restaurant filled up substantially at breakfast time , suggesting a reasonabl guest room occupancy rate, and the bar was getting very busy ahead of the brunch being served as well.

But back to the dinner at the Devonshire Club’s brasserie – now re-Christened Number Five.  The restaurant can seat 110 people and has an impressive Seafood Bar and also includes five leather banquette seating areas. It is open all day from 7 am for breakfast, lunch and dinner. This beautifully appointed room, which looks out over the private garden, has already become a popular haunt of some of the most renowned gastronomes in the City the Club claims on its website.

The Devonshire Club has appointed Adam Gray (Four Seasons Park Lane, City Rhodes, Rhodes Twenty-Four, Skylon and Bourne & Hollingsworth Group) as the Executive Chef and has unveiled a new menu that is being showcased under his leadership.

Serving a range of modern-British dishes, Number Five now  offers an inclusive menu that caters to all tastes and appetites. The menu will turn quarterly with the seasons, keeping in-line with Adam and Devonshire Club’s like-minded ethos around seasonality and food provenance. In his own words, Adam says that ‘the design of the bar, restaurant and terrace is of quality, simplicity and elegance, and our new menus reflect this.’

The new menus also mirror the Devonshire Club’s seamless fusion of history and modernity, with nods towards traditional East-London fayre complemented by offerings of a more contemporary cuisine. These new dishes use seasonal ingredients from the British Isles, executed without fuss whilst still displaying an essence of Adam’s personality – namely his passion for healthy, British food. Adam is ‘proud to be showcasing a menu that is not transient in trends or fads but worked up from core foundations of consistency and honesty.’

Having worked in some of the best kitchens in the world, Adam brings with him a wealth of experience and a proven
record of delivering to a high standard. From stints with Bruno Loubet, to two years at the esteemed Le Manoir aux
Quat ‘Saisons and maintaining a Michelin-star for over a decade at Gary Rhodes’s Twenty-Four, his history in the kitchen has paved the way for his ascension to the role of Executive Chef at the Devonshire Club.

But back to our dinner at the Devonshire – alas on the old menu but still excellent:  After a couple of glasses of pre-dinner prosecco in the comfortable champagne bar/lounge adjacent to the restaurant, we were seated at a table next to the window by the charming French hostess.  Tables are well-spaced and large enough not to feel cramped which is a positive as is the comfortable and supportive seating.  Not sure about the piped music – we could have done without that, or perhaps would have preferred a more gentle classical musical repertoire, but that’s a matter of taste and perhaps we are too old-school and out of tune with modern-day tastes! 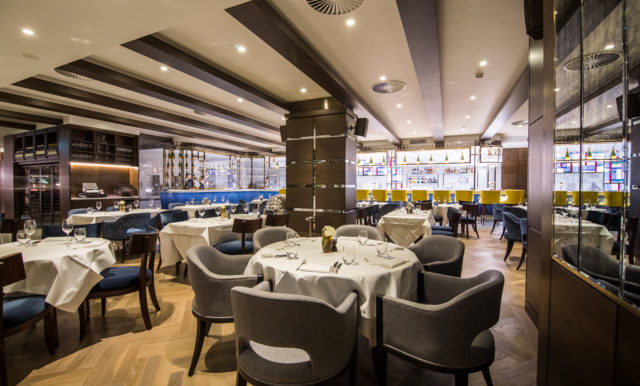 The menu seemed well priced for what was indeed a classy restaurant, and we started with a duck liver and smoked eel terrine (£21) and a potted crab and ruby grapefruit salad (£16) – both beautifully presented with some delightful flavour combinations.

The main course options were perhaps a bit heavy on fish including sea bass, red mullet and turbot choices – great for sea food lovers like myself though.  I chose the sea bass with smoked bacon, spring vegetables, and clams (£35) and my dining partner, who is not really enamoured of fish dishes, mulled over the steak options but eventually settled for beef short-rib, salt baked celeriac, bone marrow and ale braised onions (£27). The sea bass was cooked perfectly crispy skin side up and, with the accompaniments tasted divine.  The beef short-rib was good but perhaps not exceptional.

We washed the starter and main courses down with a bottle of a South Australian sauvignon blanc (£32) which was also exceptionally good.  I’ve tended to avoid Australian white wines, but this will certainly make me reconsider that decision for the future.

Then to dessert.  I chose the iced lemon meringue with warm raspberries (£9).  The combination was absolutely superb – and the hostess informed us that it was her favourite.  My companion chose the caramelised apple crème brûlée with granny smith sorbet (also £9) which was very good but again not exceptional.

We finished the meal with decent coffees (one full strength and one decaf), but no petits fours or chocolates to accompany them which one gets at some establishments.

Altogether an excellent meal, but it did come out at around £100 per head including the glasses of sparkling wine at the bar and a bottle of sparkling water.  Perhaps not an unusual price for a comfortable and classy restaurant in the heart of the City’s main business district, nor even for a restaurant serving food of this quality anywhere in the country, but maybe more than some might like to pay for an evening out if watching the pennies.

As we were staying overnight (there will be an accompanying article on the hotel and club facilities in the magazine) we also had the breakfast the following morning in a rather busier restaurant which was perhaps typical of what one can expect in an upmarket hotel.  We didn’t wait around for the recently launched weekend brunch which adds a good selection of sweet and savoury dishes to the standard breakfast menu – including roast beef and the trimmings on Sundays.  Bottomless prosecco or bloody marys are available alongside this at £15 a head, or champagne at £30 a head.  It certainly offers a great brunch option in a very comfortable and opulent restaurant within reasonable walking distance of the Barbican.

As we noted earlier, the Devonshire Club bar and restaurant is open to non-members on Friday evenings and at weekends, but not on weekdays.

The Devonshire Club is at 4 and 5 Devonshire Square, London EC2M 4YD.  For restaurant reservations telephone: 020 3146 5503 or email brasserie@devonshireclub.com