Well it’s not technically within the Barbican Estate itself but lies almost directly beneath the new Barbican highwalk just behind Salters Hall, but the new Barbie Green bar/restaurant/coffee shop is perhaps even closer to some Barbican flats than the restaurants within the Barbican Centre itself.  It is located in London Wall Place just to the south of the re-sited Minotaur sculpture and its big picture windows on its east side look out directly at the old ruins of St. Alphage Church. 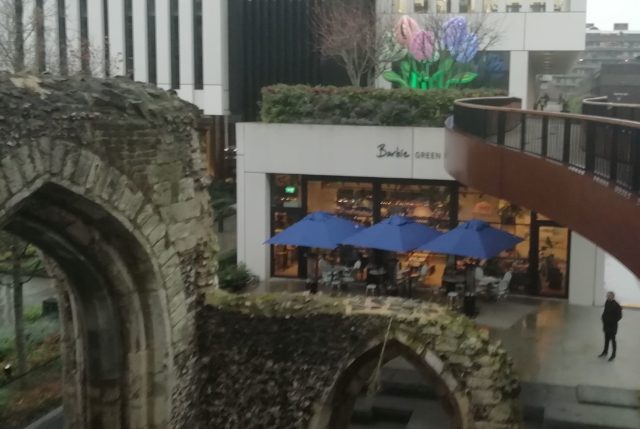 Barbie Green is located opposite the ruins of the old St. Alphage Church and almost underneath the new highwalk.

Barbie Green is the latest offering from the Australian-themed Daisy Green group which now has ten establishments, all in London.  (We reviewed its Broadgate location – Beany Green – back in the 2015 Summer issue).  But unlike some other ‘chain’ restaurants each location has its own individual characteristics and menus (although some dishes are common to all), and all branches retain the casual Aussie vibe.  Thus Barbie Green promises to be a great place for casual dining (from breakfast until late evening), weekend brunches, a convivial bar location and coffee shop.  On our experience it deserves to do well.

The bar/restaurant/coffee shop has an ultra-modern Australian “outside in” feel to it, with fully retractable floor to ceiling glass windows that open up onto an alfresco dining area and over the gardens between Andrewes House and London Wall.  It is thus a light and airy restaurant space with an outside dining area which should really come into its own at warmer times of the year.  This outside space is equipped with patio heaters and big sun/rain umbrellas so remains usable at less clement times too.

The restaurant website reckons that it is thus perfect for the first coffee meeting of the day (it is open from 6.30 am on weekdays), casual healthy brunch/ lunch and early evening alfresco drinks. In addition, Barbie Green also serves up fire baked, Roman style thin and crispy pizzas all-day, along with innovative evening small plates and Aussie style steaks and plant-based dishes.  It is the only restaurant in the group with a specialist pizza oven, and comments from diners on its fairly limited range of thin crust pizzas are extremely positive.

We visited on a fairly quiet Wednesday evening with only a few tables occupied.  It was a short walk down from the Andrewes highwalk – probably the quickest and easiest route down is via the lift halfway between the corner of Andrewes and Willoughby Houses and Bassishaw highwalk over the bridge across Fore Street and close by the Minotaur. 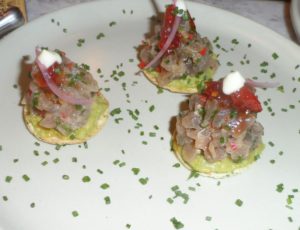 Given the restaurant was half empty (or half full if you are an optimist) there was plenty of choice of where to sit.  Tables are quite small, but that’s probably a function of seating around 40 covers in the fairly restricted restaurant interior.  The seating is comfortable though.  Service was attentive with the waiter making some good recommendations.  The dinner menu is nicely limited but with some tasty looking options, as well as the range of pizzas.  There’s a good choice for vegetarians too.

There’s a range of seven small plate/sharing starter dishes available ranging in price from £4.80 to £11.20 including vegetarian and vegan options. 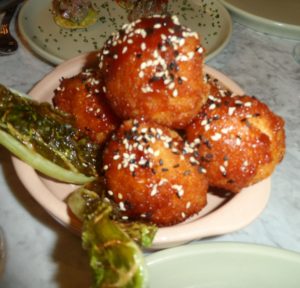 For starters we chose the Spicy tuna tostadas, with avocado, yuzu cream, candied chilli  (£8.90) – small but exceptionally tasty and the Korean cauliflower ‘wings’ with a sweet & sticky sauce, sesame, and ginger (£7.90) – suitable for vegans and quite substantial – indeed probably almost enough for a main course!  Again hitting the spot. 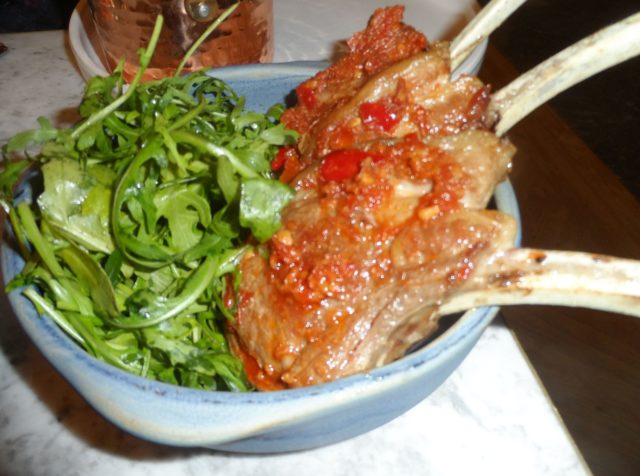 For the main course there was a bit of a dilemma.  We both fancied the ribeye steak, but in the interests of diversity in the review, as a compromise my dining companion opted for a second starter (or rather small plate) of the lamb cutlets, with house chilli pesto (£11.50) – plus truffle and parmesan fries at £5.50 in case the standard small plate portion was too small on its own.  She needn’t have worried.  There were three decent sized lamb cutlets – and she raved about the tenderness and taste thereof, thus it proved to be an excellent choice.

I, therefore, had the good sized ribeye steak at £26, which came with truffle and parmesan chips and a choice of green peppercorn or béarnaise sauce.  My steak was cooked medium rare to perfection and was both tasty and tender – what more could you ask for.  My only complaint was that the green peppercorn sauce which I asked for was perhaps a little thin – more of a green peppercorn flavoured gravy and it lacked any obvious green peppercorns in it – they had presumably been ground down or sieved out to instigate flavour rather than being an obvious ingredient of the sauce. 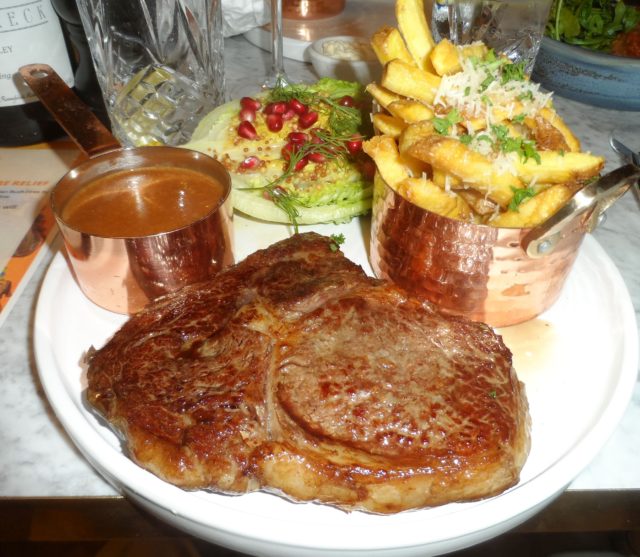 There were four other main course (plate) options including a vegan dish, ranging in price from £12.40 to £16.50 and, of course the pizza options with five choices from £8.60 to £12.  As mentioned above the thin crust pizzas here get very positive reviews and they look pretty good too judging by those served to clients at another table.

The starters and mains were washed down with an excellent Australian Barossa Valley Shiraz and some sparkling water – at which point we needed a bit of a pause before sampling the dessert.

There was a choice of four desserts from £6 to £8.80 and we ended up sharing the vegan chocolate cake at £6.50 at the waiter’s recommendation.  Perhaps a little too dry for my taste, but delicious nonetheless. 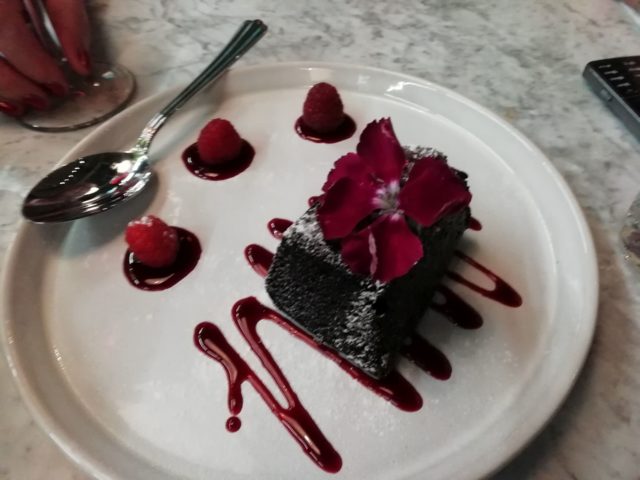 All Daisy Green group establishments pride themselves on their coffee.

Barbie Green is open on weekdays from 6.30 am to 11 pm, with breakfast served from 7am.  It is at 2 London Wall Place, London EC2Y 5AU.  Reservations can be made by email at reservations@daisygreenfood.com

On the weekends, Barbie Green serves an all-day ‘Australian’ brunch/bottomless brunch and is open from 9 am to 5pm.