When we published our first review of one of the Shard’s new restaurants we titled the offering ‘The views, the views…’ seemingly as though this was the only London restaurant offering dining with such a spectacular outlook.  This thus rather ignored the fact that the Paramount restaurant in Centre Point, virtually above Tottenham Court Road tube station, had been offering a similarly elevated eating experience for around four years already.  Indeed Aqua – the restaurant covered in the Shard at the time – and the Paramount are both 32 stories up above street level and thus both offer spectacular views from this height.

In our Autumn issue of Barbican Life we will be looking at three London restaurants offering ‘breakfasts at altitude’ – probably one of the lowest cost ways of dining in London with spectacular views and I have to say that a leisurely breakfast at the Paramount on a bright summer day, looking across towards the impressive modern skyline of the City of London, more than lived up to our expectations.  The views were just as good as from the Shard, but providing a different aspect – directly from the west – and the food was of excellent quality too.  What a great place to take a visitor to London to check out the skyline, or for a business breakfast with views – and one can easily have a substantial breakfast there for less than the price of a trip on the London Eye – and you don’t have to go through airport-type security for a limited time trip into the bargain.

But, be warned – the Tottenham Court Road station area is a horrendous construction site and the Paramount restaurant has had to suffer its entrance access being moved around the Centre Point building at the whim of the contractors.  It can be difficult to find one’s way in.  But once this task has been accomplished (the entrance when we visited was up the steps immediately adjacent to the New Oxford Street (South) exit from the tube station) you reach reception where you are directed to a lift (elevator for U.S. readers) which whisks you up to the 32nd floor restaurant level.  The restaurant entrance is right opposite the spectacular bar and you are directed to tables boasting the magnificent views.

Breakfast time seems to be pretty quiet so one doubts if reservations are necessary, but may be worthwhile just in case, but, we were told, the bar and restaurant gets crowded in the evenings (it is open into the early morning hours Monday to Saturday, but closes at 10 pm on Sundays) with the after work rush so it would be wise to book if one wishes to have dinner there for example. 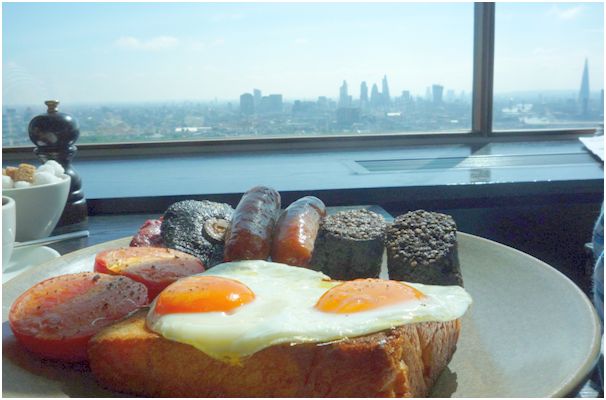 Full English with a view

Service was attentive without being overpowering and we started with some very good coffee and freshly squeezed orange and pink grapefruit juice while we decided what to have from the menu.  In addition to the great coffee there is a wide selection of specialist teas available including one (the so called High Tea Cocktail) described as an invigorating, vitamin rich blend of cheerful orange and warming ginger to get you set for dizzying heights. Packed full of herbal tonics traditionally used to fortify the body against altitude sickness. Ginger to settle the stomach, gingko to stimulate the circulation, cleansing milk thistle and reviving ginseng and schizandra.

For the food I chose the full English (£12) – bacon, sausage, eggs, black pudding, flat mushroom, fried tomato and fried bread.  It would have come with baked beans too (which are not specified on the menu) but luckily I asked and it was served without.  I don’t particularly like baked beans and consider them an unnecessary aberration to a full English breakfast, although they almost seem to be the norm these days more’s the pity.  My serving of all the other elements, when it arrived promptly, seemed to be enormous with two of everything except the fried bread and the quality of the offerings was great.  The eggs (Cotswold Legbar) had really deep orange, almost red, yolks and the Blythburgh sausages were extremely tasty as was the black pudding, and the back bacon looked to be from a butcher rather than soggy supermarket stuff.

My companion ordered wild mushrooms on toast and poached egg (£9.50) which looked great – and, I am told, tasted so too. 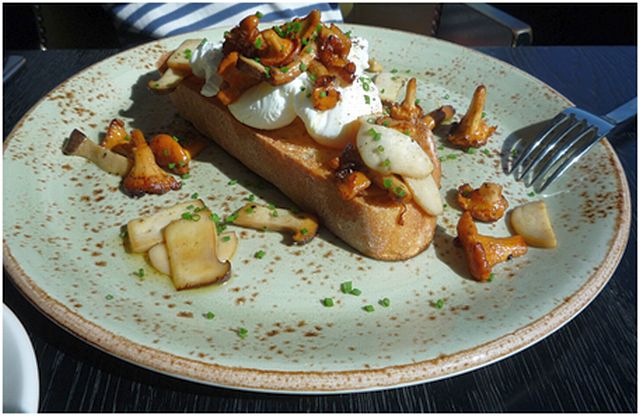 But there are plenty of other options as well, although nothing too out of the ordinary, but given the views and the service all seemed to offer excellent value.  Some examples: a three egg omelette with choice of fillings (£8.00); Selection of pastries (£5.50); Eggs Benedict (£10.50); Roasted Figs, Greek Yoghurt, Honey & Toasted Pecans (£7.50) to name but a few options.

One can wander around and look at the views in virtually all directions.  Definitely a spectacular location for breakfast.  We had difficulty picking out the Barbican from our City View table but then realised that was because at that distance the three tower blocks all seemed to merge together making for a seemingly far wider single building rather than the narrow towers we were looking for.

The Paramount also has a 360 degree narrow viewing gallery on the 33rd floor which has a bar and is open later in the day and on the 31st floor there is a dedicated 4,550-square-foot events space which  can host everything from meetings, presentations and launches to film screenings, dinners and weddings.

Breakfast at the Paramount is served from 8 am to 11 am Monday to Friday only but in our experience is well worthwhile for both views and the food quality as a special breakfast destination.