A visit from Prince Edward, Earl of Wessex, to the Barbican in conjunction with a London Gardens Society tour of City gardens and their ecological impact, was the highlight of the Barbican Horticultural Society’s 35th Anniversary.  The Hortisoc’s Chairman, William Howard, describes the visit.

Prince Edward, The Earl of Wessex had arrived in the Barbican as Patron of The London Gardens Society (LGS) to which our Barbican Horticultural Society (BHS) is affiliated.

The Prince was here specifically to celebrate with us the 35th Anniversary of our Society.

He was accompanied by Tim Roberts, his Secretary, and members of the LGS, Secretary and Judge John Dalziel and Chairman Sir David Howard Bt who was here as the Representative of the Lord Mayor of the City of London. 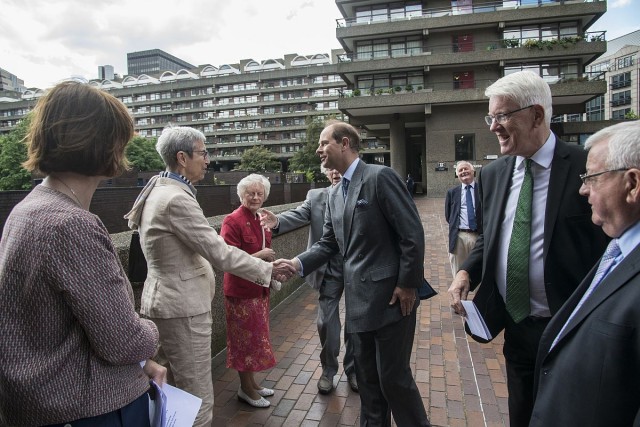 The Tour Party then accompanied the Prince to The Beech Gardens area of the Estate, where the following members of the Estate Management were introduced by William Howard. 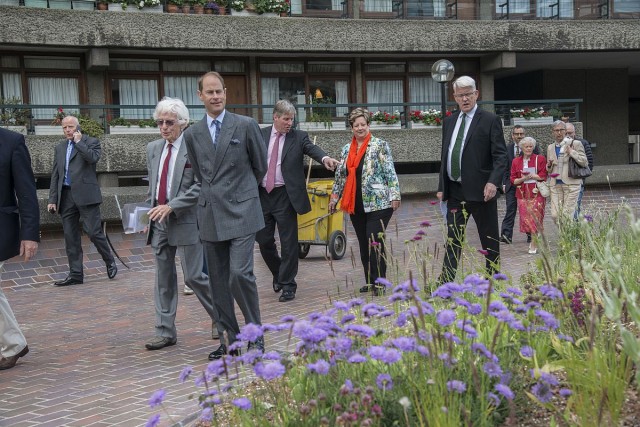 The replanting of the Beech Street area was designed by Professor Richard Dunnett of Sheffield University, who was also responsible for the layout of the Olympic Park, East London. Louisa and Geoff gave an outline of the main principles for this area. There is no irrigation system; four different plant mixes to reflect sun and light conditions in four different zones; importance of year round colour and flowering; providing habitat and support for native wild life. There is no seasonal bedding or replanting, simple cutting back and weeding.

The Prince showed great interest in the project and demonstrated the depth of his horticultural knowledge in the questions he asked during his walk through this part of the gardens and the rest of the visit.

The walk continued through the established planting with Ron Froud and William Howard keeping The Prince informed of local affairs, mostly horticultural.  With some light hearted badinage, the subject of the coming of the new LSO Musical Director Designate Sir Simon Rattle and movement of the London Museum to the Meat Market, was discussed together with Grade 2 listing.

Then into the Conservatory where Sir Nicholas Kenyon greeted HRH, and Ron Froud the head gardener with whom Prince Edward discussed the exceptional tropical display. 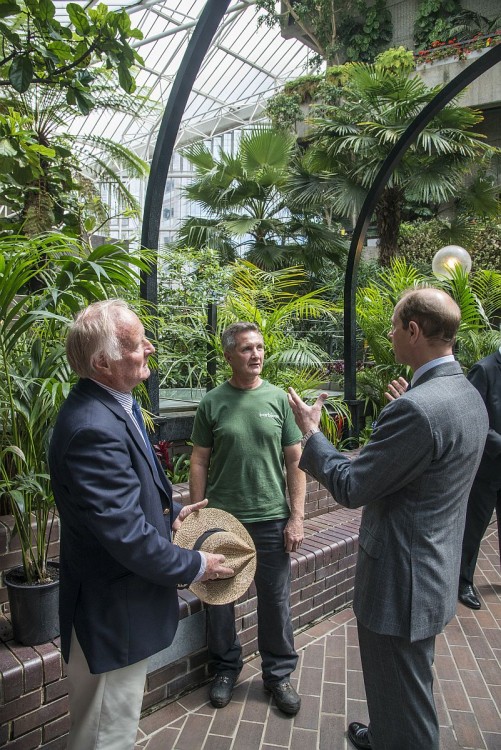 In the Conservatory chatting to Ron Froud and one of the gardeners.

The tour continued inside through the Centre, and on to the Lakeside to view other areas of Horticultural interest.  Here Ron Froud made sure that HRH viewed the ‘Hanging Gardens of Barbican’ a part of Gilbert House, and many other splendid floral displays in full colour on balconies cultivated by residents.  The Prince was clearly impressed by the variety of planting that softened the brutalism of the architecture, a subject that was obviously close to his own heart. 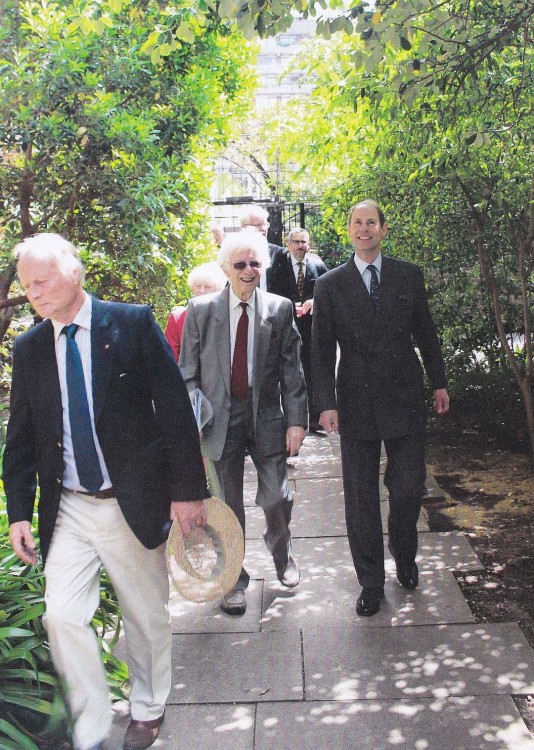 Whilst walking through to Thomas More Gardens, the resident’s Barbican Horticultural Society came into its own, as William Howard told him about its activities for the members, such as – the Summer Competition, Gardener’s Question Time with eminent panellists, the varied outings and lectures generally ten a year.

On the lawn William introduced: Jean Langmead, President and Founder of the Society, together with, Jill Smith, former Chairman, and Committee members, Jane Bickerton and  Lionel Meyringer. 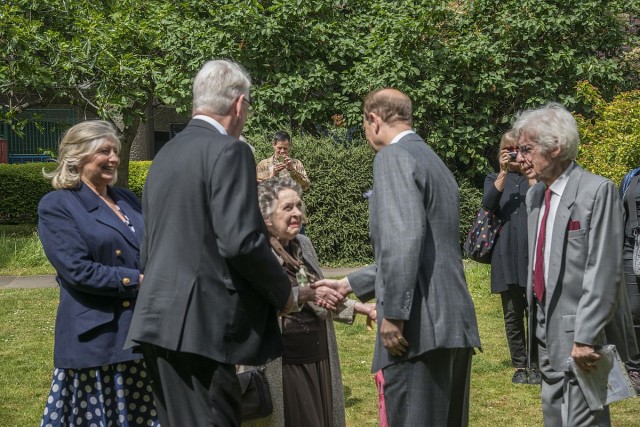 Prince Edward being introduced to Jean Langmead at the site of the Weeping White mulberry tree planted by the Queen Mother in 1984.  Also in picture – from left – Jill Smith, Sir David Howard and William Howard

How appropriate that this visit coincided with the 35th Anniversary of the founding of our Barbican Horticultural Society, and close to the date of a particularly notable event on the 4th July 1984 in the Thomas More Gardens.  A ‘Weeping White Mulberry Tree’ was then planted by Queen Elizabeth, The Queen Mother, when she visited our Society as Patron of The London Gardens Society. HRH was delighted to be shown the tree by Jean Langmead who was present at the time of its planting. 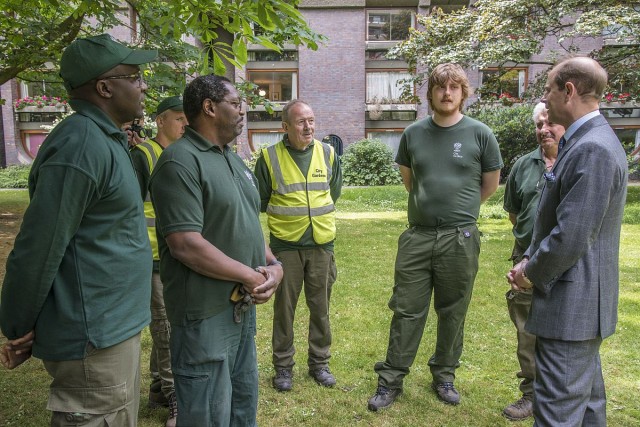 William Howard then asked The Prince to speak to the current team of five gardeners who care for the grounds.  He talked to each of them with great enthusiasm, asking their speciality and length of time they had been working in the Barbican.  William was delighted that when talking to them the following day each said, with a huge smile, that it was an experience they will never forget.

William Howard and Jenny Hayward then accompanied HRH to his car, exchanged handshakes with much laughter and thanked him for his visit to the Barbican.

This annual LGS Tour for HRH was on an entirely different theme, and included this one hour visit to The Barbican as a result of discussions between John Dalziel, Ron Froud and William Howard.  The Tour was based around The City of London’s part of pushing the ecology and the way people were growing plants to help with the environment.  HRH was pleased that the Barbican, and in particular the Barbican Horticultural Society, was contributing towards this aim.