What a treat!  That was my companion’s comment after visiting the Tower 42 venue for le Restaurant de PAUL in Tower 42 in the City for a decidedly French take on the English afternoon tea ritual.  Indeed it was sans the traditional British pot of tea which might disappoint the purists, but in tea’s place were unlimited glasses of the restaurant’s house sparkling wine from Gaillac – Ky Procco  – to wash down a three-tier serving of sandwiches and pastries – all French style. 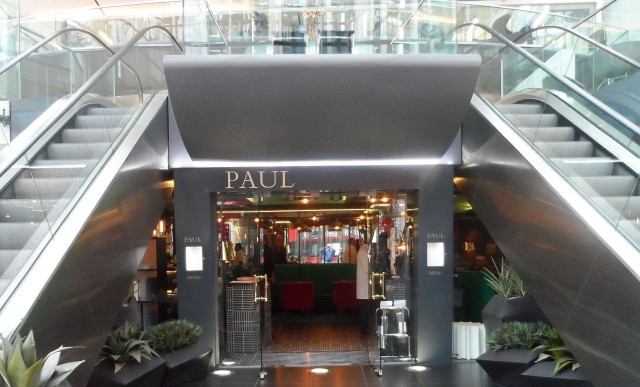 Indeed afternoon tea options are cropping up all over the place these days as restaurateurs seek to get more efficient use of the space they occupy, and I have to say this French variation with sparkling wine rather than the pot of tea is something special.  Of course if one prefers to drink tea I am sure the restaurant can provide that too!

Apparently the French equivalent of the quintessentially British afternoon tea is called Le Goûter, and at Le Restaurant de PAUL the new bottomless afternoon tea beautifully blends the best of British and French cultures, although in France Le Goûter more likely comes with coffee or hot chocolate rather than the vin mousseux, aimed at the boozy British perhaps, or just an option to help draw people in.

In any case, this tea simply oozes savoir faire and is a great way of filling an afternoon, assuming one has the time available and the head for the extremely pleasant sparkling wine and, preferably, does not have to return to the office for any serious work!

For £24.95 per person, one can enjoy free-flowing French bubbles, delicate artisan sandwiches with fillings including Camembert and poached salmon, exquisite patisserie, jewel-like macarons and, fresh from the Paul bakery, sweet melt-in-the-mouth segmented brioche (rather than English scones) with the cream and jam which is normally the highlight of the English tea a la restaurant or tea room. 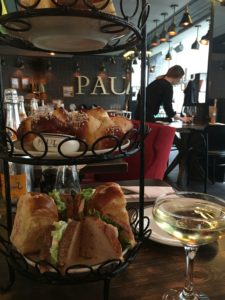 The three tier serving of sandwiches, brioche and pastries with sparkling wine at Le Restaurant de PAUL. Picture  by Jennie Blouet of StreetSmart.

This French style afternoon tea at Le Restaurant de PAUL launched on 31st March at the Covent Garden branch and, more conveniently for Barbican residents on 3rd April at its sister restaurant in Tower 42 on Old Broad Street.  The ‘bottomless’ afternoon tea is available for a minimum of two people sharing and is served Monday to Friday 2.30pm – 5.30pm at Tower 42 and weekends only in Covent Garden at the same times.  At the moment this rather special afternoon tea option is intended to be available indefinitely.

We went along for this indulgent treat at Tower 42 on a Tuesday afternoon at around 3.15 pm.  My companion had beaten me there and was sipping sparkling water and I joined her with that.  The three tier serving of sandwiches, brioche and patisseries and the first glasses of sparkling wine were quickly delivered.

We worked our way up the three tier serving starting with the sandwiches – all savoury and delicious in slices of artisan bread – and then to the middle tier French take replacing scones with cream and strawberry jam – but in our view the brioche in place of traditional scones much superior.  The sweet brioche was truly melt-in-the-mouth and the combination with the cream and strawberry jam exquisite.  Sparkling wine glasses were topped up as soon as they were seen to be getting low.

Given that Le Restaurant de PAUL is a boulangerie/patisserie, as well as a French restaurant,  one might expect something special on the top tier patisserie section of the serving and we were not disappointed in this respect. Altogether a most pleasant way to while away an afternoon.