Agony Aunts through the ages

Agony Aunts through the ages 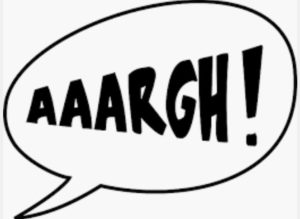 The Barbican area has had Agony Aunts through the ages (all called Ann oddly enough).  Our own Ann Drewes has been going through the archives.

I  do regularly worshippe at St Gyles, Crypple Gate. In fact I was wed there. However there is a new Rector and I have noticed that there are now more icons and statues than before and there is talk of decorations at Christmastide. I have a strong desire to rid the church of these turbulent chattels. Indeed my mood is not helped by that Royalist, the King, with his preference for proroguing Parliament, and Catholicism is also getting on my nerves bigly.

What do you suggest?

AA writes: Whatever you do, sirrah, try to keep it civil.

I spesulize in hows Clearainces. My farver, a Mydlandur, helped in the Monastree clearinses dewring Henry VIII’s rein. I kame across a box of plays that the monks entertaned themselves wiv. They hav not bean published so I have been submytting them on n regular  baysis as mine own. I am not 100% liiterrat so  some peeple eg Bakon and the Url of Oxford hav smelld a rat and hav claimed the plays as their own. Knot shore wat to do

AA: I suggest you publish some of the trickier ones – Timon of Athens or Titus Andronicus. That should put these fine gentlemen off claiming them as their own. However do this quickly before your status rises to the extent that you will not be deemed to have written a bad play – ie if we don’t like it – it must be our fault.

Can you help? I would like to specialize in crime thrillers, a bit  racy, plenty of sex of course. My hero is a lad, ex soldier Johnny Pilgrim.  I oft-times have a noggin with a couple of lads, Launcelot Andrewes and Johnny Speed. Bishops Launcelot brings along a firkin of  spare communion wine and Speed is sure to bring along a packet or two, just off a ship. Not sure what the substances are exactly, but the rest of the evening is hazy and includes a giant, pink rabbit. Next morning my cleaning woman, who fancies herself as my editiorial assistant, has sent off my midnight scribblings (of which I have no recollection) to my publisher who is always nagging me for pages. Next moment I seem to have written a spiritual text called the Pilgrim’s Progress – clearly the result of my overindulgences the night before. The public love it (well at least the pious and the would-be pious). I feel trapped. What’s more I was hoping to use a Nom de Plume I don’t really like my last name –.  I am sure my ancestors were at the back of the queue when the names were being handed out.

AA: Perhaps publish your alternative oeuvres under another name. Of course. you might find that the creative juices don’t flow unless you are on Planet Zonked. You won’t be the first ….or the last.

I have long liked living in this area and the local mayor said that, for a few ducats, he might name a small thoroughfare after me. However, one blot on the landscape is that  the local school wants more space for their new Science and Witchcraft Lab, and propose to take over my vegetable garden (and my prize potatoes, a strange new comestible supplied by my neighbour Humphrey Gilbert). I feel what I once thought of Paradise is now Paradise Lost.

I have just written a cracker of a book, Robinson Crusoe, that’s the hero by the way, but after dreaming up such a good name I can’t think of a name for his servant. I have used Man Friday as a default name it was better than my first thought – Man Overboard!

In fact while I was spending a fourteen-night at Hayling Island University as Scrivenor in Residence, I chanced upon the name of ‘Jeeves’. Thoroughly bucked up, I came back to discover that my cleaner, whom I share with John Bunyan and who fancies herself as my literary agent has sent off the draft. Now I am stuck with the name, Man Friday, and, Literary London thinks I am a bit of a jackanapes.

Yours all at sea, Daniel de Foe

AA: Who knows ‘Jeeves’ might find an equally good berth in times to come.

I can’t say I have the saintly credentials of Launcelot Andrewes or Milton or John Bunyan -although John is a bit of a lad in his cups and where he gets his sacred texts from is beyond me.  Anyway, I am an adventurer in America and Ireland. If you’re Sir Walter Rayleigh’s

half-brother, being a lad comes with the territory. However, I feel that in 400 years time, the opinion formers may judge me harshly. Perhaps if a building is named after me, can they just use my last name, so there is an opportunity to fudge the issue should the holier-than-thou brigade come reputation bashing.

AA: Fair point I will arrange it.

When oh when will the Cross London stage coach route be finally completed? We were promised that an all-weather double-rutted route would be ready by 1718, but we are well into 1720 and we are still coping with the single-rutted route which is completely unusable even in a light shower.

The Cross Coach Route is all part of the plan to shave two days off the Oxford to Dover journey. Some would say it is hardly worth the effort, as we can use the time effectively whilst travelling, but it is difficult to catch up with paper work on these bumpy coaches particularly with a quill, rough parchment and a pot of ink.

The delay is allegedly down to these new fangled roundabouts on the route and using special horns for signalling, but even the new super coaching inns, the ones with luxuries such as toilets and running water, are months from completion. The ‘Three Barrels’ Coaching Inn at Reading is but a few ditches in the ground. If the King would stop all these foreign wars and concentrate on home improvements we would all be in a better state.

AA: Oh well, I am sure it will be better centuries ahead.