19 year old Artist and Entrepreneur Amber-Lauren Ballantyne-Styles is very proud to announce and invite residents of the Barbican, to her Pop-Up Gallery at The Prince’s Trust’s Tomorrow’s Store in Eldon Street (see article on Tomorrow’s Store) during the month of October.

The first thing you will notice about Amber’s art is its diversity. Refusing to conform to the restraints of a one trick pony, Amber flits like an exotic butterfly with a paintbrush from acrylic to watercolour, from horse to human, from flower to landscape!  Her latest pop-art portraits of Uma Thurman in Pulp Fiction were created to celebrate the iconic film’s 20th anniversary and Amber-Lauren’s 20th birthday also in October. This rock-steady Libran balances life between painting and teaching kids and adults with a confidence of someone twice her age, not someone who’s just about to leave their teens. Her clients include Pirelli F1 Motorsport and celebrity author and former Bond Girl actress Fiona Fullerton. Other mortals who endorse her work include Sir Richard Branson, New York Art Critic James Skully and Sonia Meaden (mother of Dragon Deborah). 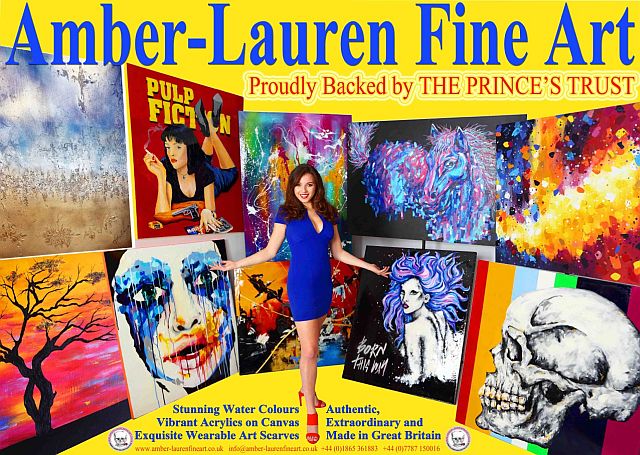 At a recent charity auction in Berkeley Square, Amber donated a painting to the Rays of Sunshine Charity. It was displayed between a Salvador Dali and a Sir Peter Blake and the water colour nude “selfie” as she called it, outsold a Tracey Emin! Amber’s latest donation is for The Prince’s Trust. This ‘secret’ painting (all identities will be covered) is to be auctioned at Castle Fine Art Gallery in Mayfair on 22nd October.

To commemorate this, her first London exhibition, she will be putting the finishing touches to a portrait of “The Boss” himself! The intricate painting of HRH Prince Charles is a very brave and accomplished piece. Dressed in all his regalia yet looking relaxed in a very ornate chair, Amber has indeed captured the essence of the future Monarch but added her personal touch to the Union Flag backdrop which gives it a very distinct and modern pop-art feel! It could certainly be a contender to hang in the corridor’s of the ‘younger’ Royals apartments! Having exchanged several personal letters with His Royal Highness recently, Amber is hopeful that despite a jam-packed schedule he might just find a moment to come and view his ‘likeness’ in his own store.

As well as a great selection of paintings for sale, Amber-Lauren will be launching five designs of her ‘wearable art’ scarves – made in Great Britain. This patriotic young lady hopes to be an Ambassador for The Trust in the very near future in order to ‘give back’ something to the organisation which has firmly put her name on the Art-World Map. The future is bright. The future has a deep yellowing glow…….perhaps it’s time for the Hirst and Emin fans of the Barbican to start investing in a piece of beautiful and precious Amber?

Amber-Lauren will be painting in store from 29th September until 30th October from 10.30am until 3.30pm every day, except 3rd October and 14th to 21st October. For more information about this extraordinary artist and an insight to her intriguing story, click on : https://www.youtube.com/watch?v=_Mk0kKn037k