While most serious restaurants with any pretensions will serve vegetarian dishes as part of their standard menu, there are seldom more than one or two such options available and in most cases vegans are not catered for at all.  So if you want choice in vegetarian food, particularly if you are of the stricter vegan persuasion, you will need to seek out a specialist establishment, and luckily those of us who live in the Barbican have a couple of excellent options nearby in Carnevale on Whitecross Street and Amico Bio on Cloth Fair.  We recently got to eat at the latter and certainly there was plenty of variety available (with most dishes suitable for vegans too), along with a great selection of organic Italian wines to wash the food down. 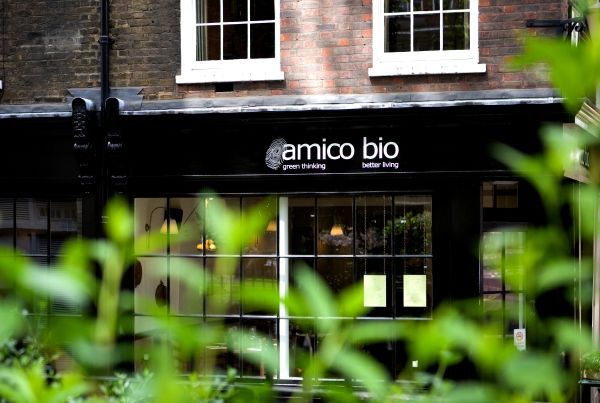 Amico Bio opposite St. Bartholomew the Great church at 43-45 Cloth Fair, is the brainchild of Pasquale Amico who has generated quite a following.  Indeed so much so that he has subsequently opened a second Amico Bio in Holborn.  The original one though has now been open for around four years and is in a delightful location on a very quiet street, but only a stone’s throw from Smithfield market and the host of other eateries and clubs which surround it.  It claims to be London’s first vegetarian-organic Italian restaurant.

Barbican residents of more than a few years will undoubtedly remember the location as the site of popular wine bar/restaurant, Betjemans, so-named because it was set up at what used to be the London residence of poet Sir John Betjeman.  Indeed the first and second floor apartment at No. 43 is owned by The Landmark Trust and is available for short rentals.

Pasquale is Italian and the restaurant is family-owned by him and two cousins.  It sources much of its produce directly from the family-owned farm back in Capua in Italy, and where they also have a sister restaurant in Naples.  He has a great culinary background having trained with an enviable list of prestigious names including Don Alfonso, Gary Rhodes, Bruno Loubet and Giorgio Locatelli before opening London’s Via Condotti (gaining a Michelin Bib Gourmand) before coming up with his own concept of an Italian restaurant serving organic, vegetarian dishes made exclusively with the freshest of Italian produce.  Hence Amico Bio. 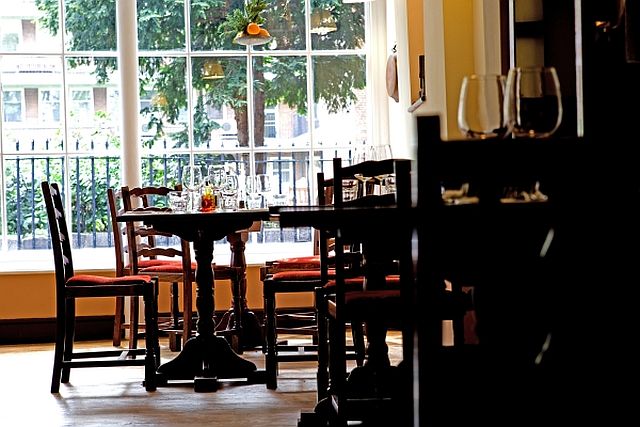 We were a group of six people and thus got the chance to try a broad variety of the food served and taste Pasquale’s latest seasonal organic wine selection.  Good on both counts.  Personally I’m not a born vegetarian so have to admit I find some vegetarian dished quite bland, however some of those served were excellent.

We started with two beautifully presented salads – really fresh produce – and then a tasty risotto followed by perhaps the piéce de resistance – vegetarian ravioli stuffed with smoked cheese and sun dried tomatoes served with cherry tomato and basil sauce – very tasty, and then a seasonal vegetable tempura with a sweet and sour sauce. 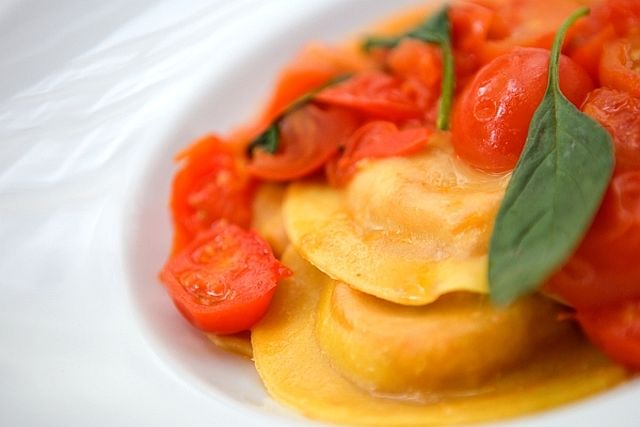 We had a selection of Amico Bio’s desserts and a vegan cheese tray.  We noticed in a review elsewhere readers were warned that a vegan had found cheese in one of their dishes, but obviously hadn’t realised that Amico Bio’s cheeses are indeed vegan and are remarkably similar in taste to some well known dairy based cheeses.

Part of the reason for our visit was to taste Pasquale Amico’s selections of seasonal wines.  We were given a delightful Prosecco to start – then followed by three whites and three reds to go with the starters and main courses, ending with a dessert wine offering.  I have to say I do not know a huge amount about Italian wines so some of the varietals were new to me, but all well received.  Pasquale says he has carefully chosen his wines to kick start the summer season in style. The selection we sampled included the intense Primitivo ( a varietal related to the American Zinfandel) red, a very pleasant Gavi white.  There was also a Cataratto, medium-bodied white with notes of melon and apple, a very pleasant Falanghina – dry white with good citrussy and apple nose and taste (unoaked) and a red Salento Rosso, renowned for its colour and delicious fruits of the forest flavour.  The dessert wine was a very pleasant Moscato – just enough sweetness to complement the desserts without being over-cloying.

Altogether a pleasant occasion.  Pasquale likes to say he will convert meat-eaters to vegetarian food.  I’m not sure I’d go that far – perhaps too much of a carnivore – but it did open up some pleasant options to consider for the future.

Vegetarian food does, for the most part, tend to be less pricey than its meat or fish-based counterparts, but even so, a three course meal at Amico Bio, including wine and service, would still cost around £30 a head or more depending on the wine chosen.  The atmosphere is pleasant without being plush and it is in a nice, almost bucolic, location with windows looking out across Cloth Fair to the grounds of St. Bartholomew the Great.

Amico Bio is at 44 Cloth Fair, London EC1A 7JQ, Tel: 020 7600 7778and is open Monday to Friday 12 to 3pm, 5pm to 10.30pm, Saturday 5:00pm to 10:30pm and closed on Sundays and Bank holidays. It is also open for afternoon tea reservations and prebooked events.  For more information, and to make reservations online, the restaurant website is at www.amicobio.com.uk