Apulia – Italian cuisine with a difference

Apulia – Italian cuisine with a difference

What a great addition to easily affordable Barbican area restaurants!  The new Apulia restaurant at 50 Long Lane, opposite the south exterior of Smithfield Market, serves authentic southern Italian food  in pleasant surroundings with friendly and attentive service – all at reasonable prices. 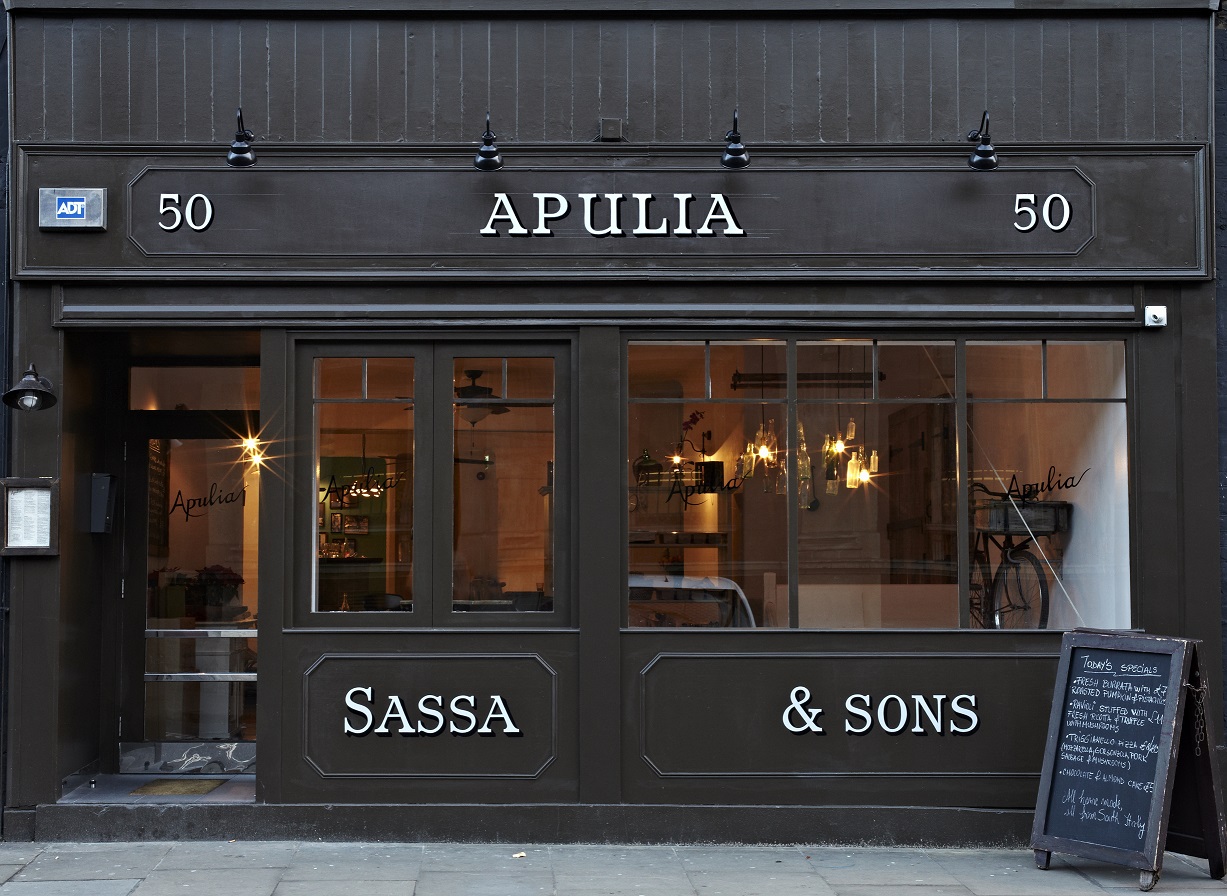 Apulia or Puglia, is that region of Southern Italy bordering the Adriatic Sea in the east, the Ionian Sea to the southeast, and the Strait of Òtranto and Gulf of Taranto in the south. Its southernmost portion, known as the Salento peninsula, forms a high heel on the “boot” of Italy.  Its capital city is Bari – and it’s from Bari that the family which owns and runs this new Italian restaurant on Long Lane hails.  Indeed they run two restaurants in Bari itself and the newly opened one here aims to provide the kind of food one would find on its home turf.  And with a focus on quality and traditional ingredients, much of which is imported directly from the Apulia region every week, we think the new restaurant offers a great cuisine which differs quite sharply from that served up in the usual run of the mill Italian restaurants in London.

Personally I’m not normally a fan of Italian cuisine being not over-keen on pasta dishes and while the standard non pasta ones one finds in most Italian restaurants are ok, I mostly wouldn’t go out of my way to eat them.  But on the few dishes I’ve sampled at Apulia so far, I could well become a convert.

Interestingly, when I eat at a new restaurant I often scour the reviews on websites like TopTable and  Tripadvisor to see what individuals think.  Now despite Apulia only having been open about six week I found about 30 individual reviews on the new establishment with only one disparaging comment.  Nearly all the others were four and five star reviews including one person who had found it so good that he’d already eaten there six times in two weeks, while another from a lady who described herself as a ‘born and bred’ Italian and ‘very picky’ when it comes to Italian cuisine, described Apulia as perhaps the best Italian restaurant she has eaten at in London – praise indeed.

When one comes across a family run restaurant like Apulia which gets it right, then you can be pretty assured that they will have put their heart and soul into it to make it a success.  And Alessandra, who runs front of house at Apulia and her fiancé – who is the chef and a member of the Bari-based family owners, do seem to have got things right.  Dishes are designed not to be over-large – so if you expect huge helpings you will be disappointed, but most of us don’t.  And for those with big appetites order more courses – the prices are low enough to be able to do that without breaking the bank with starters coming in at £4 to £7 and mains from £7-£ 11.  There is also a set lunch menu, with plenty of choice, at £10 for 2 courses and £15 for three.

We ate there on a Wednesday lunch time and the restaurant main floor was fairly full – there is a downstairs area too and between the two floors there are places for 85 people.  Tables are not too closely spaced, the atmosphere is good, although the wooden floors can make it a little noisy if there is a loud group present!

As to the food, for a starter I had Cozze alla marinara (£6) – a smallish earthenware bowl of mussels in their shells cooked with wine, tomato, garlic, bay leaves and chilli.  Absolutely delicious.  My companion had prosciutto (£7) – a good helping of light pink great looking parma ham which she also described as excellent.

For the main course I went for Teglia di agnello al forno (£10) – described as oven-baked lamb chops, with baby potatoes, onion, celery, wine and pecorino.  The lamb chops were deboned and it was served in the earthenware pot in which it had been cooked – a sort of very tender lamb hotpot – again a great tasting combination.  My companion had Spigola al cartoccio (£11) – sea bass cartouche with baby potatoes, celery, olives and courgettes which smelt – and apparently tasted, divine.

For dessert we had the restaurant’s home made Tiramisu (£5) and Torta di mele (£5.50) – apple cake with walnuts. Both good.  We were alos persuaded to try the Cacciovello al forno – oven baked cacciovello cheese with apple, honey and raisins – a pleasant enough combination but not easy to eat with the cheese seeming loath to leave its earthenware container! 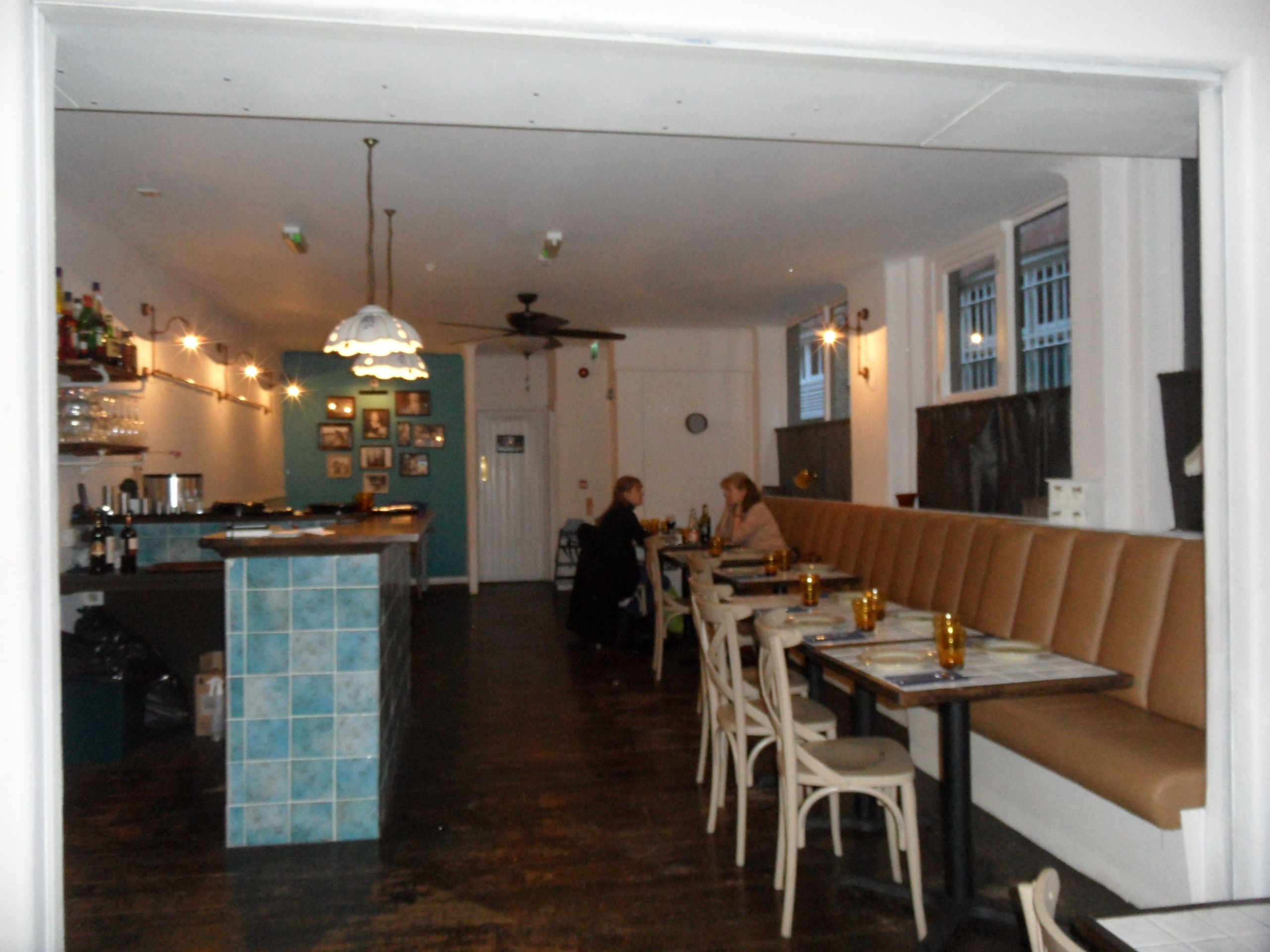 The upstairs restaurant section at Apulia

We washed this all down with still water and I had a glass of red wine.  Alessandra recommended a glass of the Puglian Negroamaro Canonico 2012 at £6 which was well worth the recommendation.  I know little about the wine from that region but this was a dark and fragrant medium bodied red and very pleasant indeed.

While I haven’t sampled them the restaurant prides itself on its pizzas – and rightly so according to a colleague who has also eaten there and was very impressed.  Huge care is apparently taken over the preparation of the pizza dough and the restaurant’s own yeast is brought in from Bari.

Now Apulia’s decor and service is not Michelin star standard but it is pleasant and friendly and makes for really nice eating-out experience – and definitely an affordable one by local standards.  The cost of our meal with drinks and service came to around £60 for two people (without the desserts it would have been £50) and although the dishes may have been on the smallish side it was more than enough to sate one’s appetite.  Definitely a neighbourhood restaurant that should appeal to Barbican residents – and indeed to anyone else reading this review.