Aubaine Broadgate Circle – Not truly French, but very pleasant regardless

Aubaine Broadgate Circle – Not truly French, but very pleasant regardless

We continue our reviews of the new Broadgate Circle restaurants with Aubaine.  We would question its description as a ‘French’ restaurant given the menu was varied enough to be perhaps more than just  influenced by other Mediterranean and British cuisine, but so saying that doesn’t necessarily detract from the eating experience which is perhaps bistro in style if not ambience or menu.  It also reckons to be a boulangerie/patisserie and in this respect does offer a good selection of French style pastries and breads. 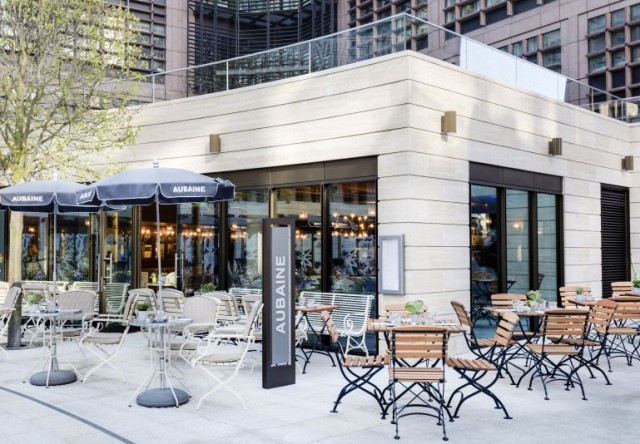 The Broadgate Circle Aubaine is the ninth London restaurant to carry that name and a tenth has since just opened in Hampstead.  It is thus obviously a successful brand already without being perhaps quite as formulaic as some of the other French ‘chain’ restaurants like Cote Brasserie, Café Rouge, etc.  although the menu is standardised across the group.

Aubaine is open throughout the day from 7.30 am for breakfast – to try and catch those early office birds on the way out of Liverpool Street station, or from the vast office complex that is Broadgate – and here, on a nice warm morning one can certainly channel the French experience sitting outside with a coffee, croissant or two or a pain au chocolat and French bread and people watch.  An Aubaine basket at £10 comprises Fresh squeezed orange juice, basket of bread, croissant, confitures. Tea or coffee.  There is even a ‘Full French’ option (£16) which might not be recognised by anyone across the channel.  It replaces English sausages with the Toulouse variety, English bacon with Alsace bacon – not sure if there’s any difference, but presumably so, eggs ‘de votre choix’  and Provençale haricot beans in place of English baked beans.

The restaurant gets particularly busy at lunchtimes, and later on serves afternoon tea and then dinner  It’s open until 11 pm at night weekdays and from 8 am-10 pm Saturdays, but closed on Sundays.  Coffee, tea and alcoholic and non-alcoholic beverages are served all day. 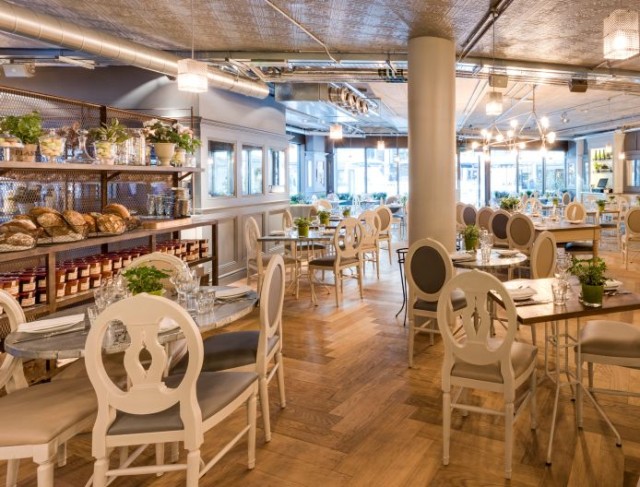 The bright and spacious interior

We were there for dinner on a Tuesday evening, and given the weather was fine and warm, the outside tables were well occupied with people enjoying an evening cocktail, aperitif or beer or two, as were many of the other restaurants/bars on the ground level arena area of the Broadgate Circle complex, giving a nice buzz to the whole arena area.

We ate inside the restaurant rather than outside – a decently sized space with pleasant modern décor, wooden or brushed metal topped tables and salon-style chairs.  It perhaps lacks some of the bistro style atmosphere which some of its sister restaurants aim for as a result.

The dinner menu is not large and, as noted above, does not exude ‘French Bistro’.  Dishes are in plain English so no French language menu pretentiousness here.  The wine list is also not exclusively French with some other European and New World offerings as well.

We started with the Aubaine Sharing Board (£18) between us – a generous selection of cold meats, paté, cheese, peppers, nicely prepared green salad and the stand-out paprika and chili dusted calamari with spring onion and lime aioli which was outstanding.  The latter can also be ordered separately (£9) and is, the waiter told us, perhaps the most popular offering on the whole menu.  I recall sampling it at the Broadgate Circle opening party back in early June and was equally impressed then.  Other starters range from £6 to £14.50 – with most at the former price. 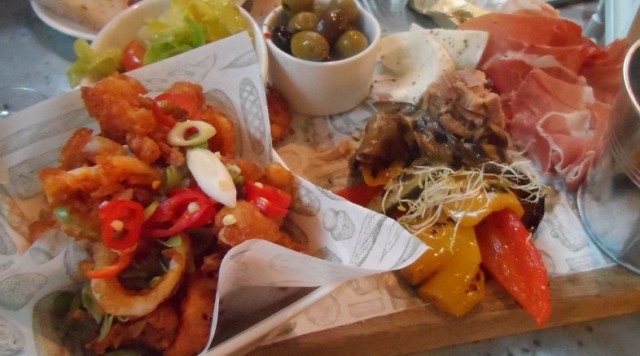 The sharing board packed with excellent appetisers. The small bucket of calamari (left) was a standout

For mains we ordered lamb rump & breast, confit potatoes, pea purée, spring vegetables and lamb jus (£15.50) while my companion ordered lobster spaghetti, tomato, cream and basil – at £24 almost the most expensive dish on the menu!  The lamb rump was nicely cooked, decently tender – it can be a little tough – altogether a good, but perhaps not superb, dish.

The lobster spaghetti, though, although tasty was a little disappointing in that, for the price there appeared to be remarkably little lobster in the mix.  Perhaps she was just unlucky!

We were presented with a slate board with a choice of desserts from the patisserie.  They all looked mouthwatering.  I had an absolutely delicious raspberry tart, piled high with fresh raspberries while my companion tried the carrot cake – moist and again described as excellent.

We ended with coffee – Americano and decaf – and on the basis of these Aubaine serves decent coffee – very important nowadays.

The wine list is relatively small compared with some restaurants, and quite varied.  We chose wines by the glass – a Cotes de Gascogne white and a red Rioja.  Bottles range in price from £17.95 up.

Altogether a pleasant dining experience.  Friendly and attentive staff without being over-so, and service was reasonably quick, although so saying the restaurant was not hugely busy.  The location, right by the Liverpool Street Station entrance into the Broadgate Circle main arena area, makes it a great place to sit outside on a warm day and the interior is pleasing.  Perhaps not gourmet eating – but not gourmet prices either.  A good addition to eating/drinking options within a short walk of the Barbican.