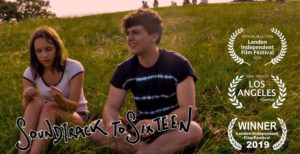 London screening dates :: The Princes Charles in Leicester Square on the 14th and 28th of March.

‘Soundtrack to Sixteen’ is a quirky coming-of-age film about growing up in London in the noughties. It is set in the Barbican and at Queen’s College London. It is being featured on the opening night of the London Independent Film Festival

Soundtrack to Sixteen was filmed by Anna-Elizabeth and Hillary Shakespeare back in 2013 when Hillary had just graduated from University and Anna-Elizabeth was just about to start. The film was based on their child/teenagehoods so it was really fitting to film it in all the places that were important to them and where they had so many memories. But also crucially cheap!

As they made the film on “no budget” (shot for 10k) it was a project where they really needed everyone they knew to to come out and help, and the Barbican community definitely did that!

There were scenes where they needed to fill a whole assembly hall with kids and all their Barbican family friends came out as extras to support them! They also had friends’ parents playing the teachers (Liz Sewell from Ben Jonson House, Debby Anness from Andrewes House – and their own parents Rosamund and Stephan from Wallside). Maisy’s best friend is also played by Barbican resident Isabel Fidderman from Ben Jonson!

They filmed in their flat on Wallside (which was used as the ‘party house’ where the two main characters both go to their first party) and in their grandmother (Lina Kukowski)’s flat in Gilbert House as Ben (the main boy’s) home. Lina also had a cameo playing herself. It was fun filming there as that was the house Hillary and Anna-Elizabeth had grown up in. As their grandmother had kept everything the same/can never throw anything away it definitely had a noughties feel to it!

They also filmed in the Barbican gardens and around St.Paul’s for some of the scenes when Maisy and Ben get to escape the stress of school life and be kids again. They filmed them playing a game of football in the gardens which was pretty fun because all the actors were abysmal at it – so it came out pretty realistic!

They’d also like to say thank you to everyone in the Barbican who helped out!

The film centres around the lives of two sixteen-year-olds: Maisy and Ben. Maisy is obsessed with a guy who never acknowledges her. She is self-conscious and constantly overanalysing. Ben – another awkward teen from a nearby school – is happy being a nerd and thinking he’s better than everyone else until his grades start plummeting and he can’t work out why.

When they meet on the night bus – Maisy still in pyjamas from a sleepover gone wrong, Ben killing time riding around the route after screaming in assembly – Maisy finally has someone she can open up to. After trying to switch friendship groups she has ended up with no friends at all and she’s mortified that she still hasn’t had her first kiss. The two fall into a tumultuous friendship but as exams loom and they must fight their anxieties, they find support in each other while they try and work out if there’s more to the relationship than friendship.

Soundtrack to Sixteen will be showing on the opening night of the London Independent Film Festival. Date&time: April 5th, 9pm. Place: Genesis Cinema in Bethnal Green. Barbican residents and others are encouraged to come along for the film’s premiere: