I expect that you will have noticed the plaque commemorating the Fan Makers on the wall of the Welsh Chapel in Fann Street. But look down!

Set in the pavement (recently re-laid) is a boundary mark of the parish of St Luke’s, Old Street dated 1892 with the names of the two churchwardens, T W Easterling and W Griffin. 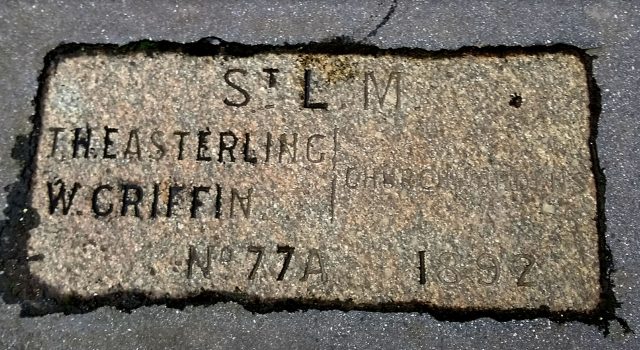 Before London had any corporate government, and long before the London borough had been devised, local services were provided by existing historic bodies. The parish already existed for spiritual purposes and had a ‘management’ role in the form of its vestry and a mechanism for getting local people together either in the church or a nearby vestry hall. It was to the parish that local administrative responsibility was gradually given by Parliament. Even when new statutory bodies were set up to deal with lighting, policing, paving, sewerage and so on, the parish remained as the local unit capable of raising its local tax. It was therefore important that people knew which parish they lived in and where the boundaries were.