Barbican resident Lawrence Williams recounts the founding and 15 years of editing of this magazine which has built up from an initial 32 page plus covers issue back in  March 2004 to a much larger, and ever more profitable, version nowadays. 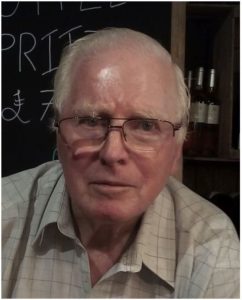 The Barbican Estate residential complex may have reached its 50th year of occupancy, but Barbican Life magazine has only been going for 16 of these years, and is now being edited by the second editorial incumbent, Helen Hudson, who took over from me at the beginning of this year.  15 years is probably sufficient time to remain in post, but in my case the changeover was also prompted by time in hospital with a second stroke (the Christmas 2017 issue was largely put together from a hospital bed utilising wifi access through my smartphone and a laptop computer.)  I thought then that my health was telling me that I should start putting alternative arrangements in place and the process of finding a new editor was entered into.  Luckily Helen was keen to take the job on – she had already been contributing to the magazine for a couple of years by helping out with our restaurant reviews and on the associated website, and is someone I am more than happy to work with over any length of transition period that may prove to be necessary.

Before I started Barbican Life magazine I had already been running a technical publishing company, concentrating on mining and tunnelling – I am a mining engineer by profession – including time as editor of both monthly and quarterly publications, and had launched/taken over and relaunched several magazines so finding a printer and page make-up design was not a problem, but I had never been involved with editing a lifestyle-type publication like Barbican Life.  This has proved to be something of an enjoyable, albeit demanding, learning exercise.

There had been a predecessor magazine which I was able to draw on for ideas and some advertisers – the bi-monthly Barbican Resident – but this had managed to get itself embroiled in Barbican internal politics – specifically over future management of the estate.  It had allied itself editorially with what proved to be an unpopular faction which, probably indirectly, led to its demise and takeover by its printers who tried to relaunch it as a City-wide publication thus losing its Barbican-specific identity.

I thus saw an opportunity to come up with a new magazine, Barbican Life, and one which would also contribute to the revenues of the Barbican Association (BA), which its predecessor magazine had not been doing.  As a quid pro quo, the BA would provide support with invoicing and distribution around the estate.  I approached the then BA chair, Stephen Horrocks, who was extremely supportive of the idea and after some contentious opinions within the BA regarding financing (I told them there would be no cost to the BA – if the magazine couldn’t make a profit from the start we wouldn’t print it and I would personally carry any other ancillary costs) and over distribution around the estate.

I was adamant, for example, that the magazine should go to all residents, while some on the BA council felt it should go to BA members only.  My view was that distributing to all residents made far more sense as it would enhance advertiser appeal, on which the viability of the magazine would depend, and reduce substantially  the complication of the deliverers knowing who was, or was not, a BA member.  We thus subsequently set up the BA discount scheme, with discounts available only to BA members, as an incentive for residents to sign up with the BA and the magazine would be able to promote that to help generate new and repeat Association membership.

Because of the predecessor magazine’s problems with internal Barbican politics, I also insisted that the magazine stay out of any direct BA editorial involvement.  The BA subsequently set up the BA Newsletter which all residents also receive on a quarterly basis, to cover BA communication with residents. 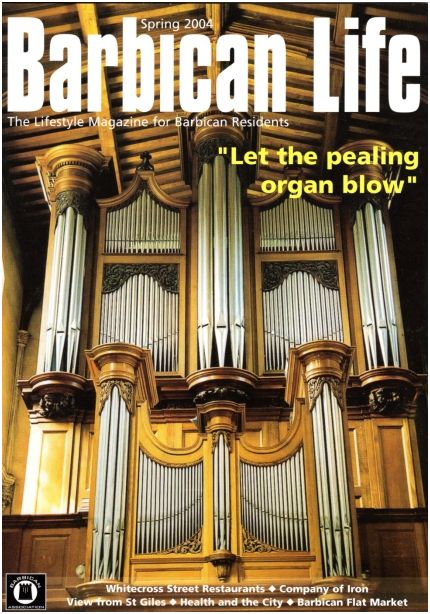 With any contentious issues resolved we went ahead with the very first issue in March 2004 with a front cover displaying the rather spectacular main organ case in St.Giles Church and a cover feature article by Gilbert House resident Anne Marsden Thomas on the international organ school based in the church, for which she was the founder and principal.  BA Chair, Stephen Horrocks, penned an article on The Worshipful Company of Ironmongers whose premises are within the confines of the Barbican highwalks, the first of several articles on nearby Livery Companies.  Inter alia we also called on a couple of regular contributors to Barbican Resident magazine – Kevin Kiernan and Katharine Rumens – to continue writing their own unique, slightly off-the-wall, columns for the new publication.  And they still have continued to do so to this day!  I think Kevin has chalked up over 120 articles over the years and Katharine cannot be far short of that total.  Dedication indeed!

Others particularly worthy of mention in their significant contributions to the success, and content, of the magazine over the years include Stephanie Ross who is still responsible for pulling in an important proportion of the magazine’s advertising revenue, as well as writing the now-regular Health in the City feature, Kate West who started off writing a section called Shop Talk in the early days of the magazine, and switched subsequently to coverage of the local arts and exhibitions scene – the Insight section – as well as contributing the occasional feature article.  Kate wrote her last Insight section at the end of last year before retiring her pen, but the section she devised lives on in the excellent hands of Janet Wells.  I should also mention former Barbican resident, Jennie Blouet, who as one half of the regular administration of the StreetSmart restaurants charity was instrumental in introducing us to key management of many of the local high-end restaurants and thus helping organise numerous restaurant review visits

We should also mention our regular preview coverage of theatre performances.  For several years this was written by Cromwell Tower resident Anthony Field up until his untimely passing some five years ago, but this section has been ably taken over by his associates John Causebrook and Gary Donaldson who have now been keeping us abreast of forthcoming live performances ever since.

Over the magazine’s life so far, all the issues have been designed and put into page by Trevor Sheldon who I have known for many years – from well before Barbican Life existed.  His dedication to the magazine, which has seen him working on it over fraught weekends as we near the publication date has been the major reason we have yet to have had to delay the planned print schedule.

Commercially we have to give huge thanks to Estate Agents Frank Harris, Hamilton Brooks, Hurford Salvi Carr and Scott City as well as Abracadabra Services and Denzil Interiors, all of whom advertised in our first issue and have come into EVERY issue since, as have some of our smaller advertisers – Mr. T. Decorators and A.R. Weight carpet specialists.  These entities have thus been major contributors to the ongoing commercial success of the magazine. They provided the initial commercial building blocks from which the magazine has grown and flourished. 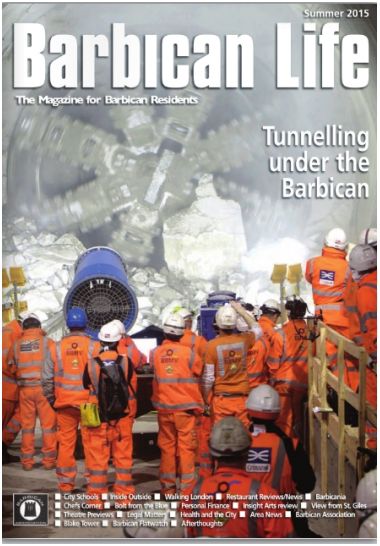 Editor’s indulgence,  As former founder and editor of World Tunnelling magazine I always looked for an excuse to get a tunnelling picture  on the Barbican Life front cover.  Crossrail gave me the relevant opportunity in 2015.

Indeed the ongoing success of the magazine can be judged by the fact that many of our current much greater listing of advertisers have stayed with us in virtually every issue since they started to advertise, while others have expanded the sizes of their advertisements over the years from quarter pages, or even smaller,  to half or full pages.  Barbican residents are obviously proving to be a hugely important market for these companies.

Editorially we have endeavoured to make the magazine Barbican-centric.  In other words the editorial content primarily relates to elements within, or close by, the Barbican itself, or are submitted to us by Barbican residents.  In this we are lucky in that many residents are extremely literate and have contributed to the magazine with articles over the years, while our location on the edge of the City of London has meant there are plenty of fascinating current  and historical subjects to cover located close by.  Even our popular restaurant Reviews section tends to be restricted to eateries within walking distance of the Estate and we are lucky in that the area around the Barbican is a hotbed of varied high quality dining establishments with new restaurants or revamps occurring virtually ad infinitum.  We don’t seem to run out of places to cover.

Editing the magazine has also enabled me to test out some of my photographic skills.  As well as providing the photography for a number of Barbican front covers, many of the articles have also featured my photographic work – some more successfully than others.  Re, the front covers, I’m particularly proud of having managed to catch a great shot of the occasionally visiting heron perched on the Brandon Mews waterfall, which was used to introduce a feature on the Barbican’s wildlife.  There have been a number of other of my cover photographs I’m particularly pleased with including a recent one featuring Michael Ayrton’s Minotaur statue in its new location, a view of Smithfield Market, and one of St. Giles Cripplegate taken through trees on a wet afternoon. 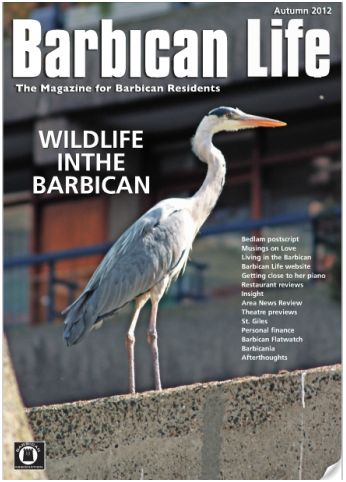 Barbican Life cover showing the visiting Heron back in 2012

Now the magazine is entering a new era under new editorship.  Readers will have noted some design changes.  I’m not a great believer in change for changes sake, so the handover is an opportune time to make these – under some pressure from the Barbican Association which, in theory at least, has the magazine within its remit.  The magazine will undoubtedly change under Helen’s editorship – hopefully for the better.  New broom sweeps clean!

Overall, I am thus inordinately proud to have devised a publication which has worked out so well over the years and is such an important contributor to the Barbican Association’s finances. (I estimate that since it was first published, Barbican Life magazine advertising has provided probably more than £250,000 to the BA’s coffers.)