A couple of years after we started Barbican Life our then printer – the excellent Friary Press in Dorchester – went out of business in the hugely competitive magazine print sector and Buxton Press stepped into the breach producing an issue of the magazine at very short notice.  We have been with them ever since and have received exemplary, and extremely price-competitive, service.  So we are delighted to report that not only has Buxton just received PrintWeek’s top award as Printing Company of the Year, it has now received this prestigious award for an unprecedented third time in a row and five times overall.

We do get approached by other printing companies, some of which are undoubtedly very good themselves, to take over the printing of our magazine, but when one is perfectly happy with one’s current print provider it makes no sense to switch for what may be a marginal price benefit – which may well be non-existent when it comes to final billing.  So we are very much in agreement with the judges who have put Buxton at the top of the list of best printing companies. 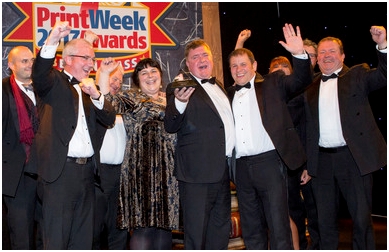 Buxton CEO, Kirk Galloway, with some of the Buxton team celebrating the award at London’s Grosvenor House Hotel

As PrintWeek notes, Buxton chief executive Kirk Galloway commented: “I really didn’t think we would win tonight. This has to be an unbeatable record, winning three times on the trot. We’ve all seen so much change, we’ve all fought through the recession and we’ve all made changes – and in our case those changes kept us going.  We’ve invested in the technology, we’ve invested in the people – you can look back and I think we set things right five or 10 years ago and we are now seeing the consistent rewards in this wonderful market.  And, I know it sounds corny, but Buxton isn’t just a one-man band, there are 135 people that are all involved in this process, and I think that’s what really makes the difference. Long live print!”