Our third magazine each year is always in September and the celebration continues in this issue for the 50th birthday of the first Residents moving onto the Estate.  Thank you to everyone who sent us updates to – and feedback from – the June issue; it warms the cockles to know that you all enjoyed it, and sets my bar high for future issues.  I’m excited to let you know that one of our Residents is in touch with someone who worked on the original construction of the Estate.  I’m planning to  interview him before our December issue, so here’s hoping for more revealing background stories for us to tuck into over the holidays!

As this magazine arrives through your letterbox, autumn will be just around the corner, but not before we see out the summer with the Barbican@50 Festival on Saturday 14th September.  Thanks to the team of volunteers who are tirelessly organising behind the scenes, there is a wealth of activities and things to see – for all ages – so we do hope to see you on the day!

Our main article this issue is from Defoe Resident (and my neighbour) Phil Ellaway.  Phil was dragged around London (including the incomplete Barbican site) by an American friend in the early 1980s.  She became an architectural historian.  He became an architecture addict – or at least that (plus his inability to cook) is his excuse for his serial club addiction.  Earlier this year, I asked him to commit a little something to paper for us.  I hope he won’t mind me sharing with you that he’s a member of at least one of them (which requires me to restrain my green-eyed monster) and he gives us a fascinating piece on the history and resurgence of some of the best clubs in London and our City.

Leaping to the 21st century version of communication now – if Apple sticks to its normal release schedule, we should be hearing about the latest iPhone 11 around about the time you read this.  There can be little doubt that the new iPhone will be considered expensive, particularly since there are now so many smartphones out there with very similar functionality.  Our esteemed Editor Emeritus, Lawrence, is an avid hunter-down of tech bargains, and takes a look at alternatives (to avoid us having to equity release in order to upgrade our handset).

Earlier this year Barbican Resident Fiona Savory contacted us about a possible article on St Joseph’s Hospice.  St Joseph’s has helped a number of Barbican residents, not only with their final days, but also others with support services in their homes and short-term respite stays at the Hospice.  Fiona and our own Janet Wells tell us more about this support which is just around the corner in Hackney.

Not only is it our Estate’s 50th, but we are also celebrating 100 years of the Bauhaus movement which is arguably the birthplace of our Brutalism.  Jessica Douglas from global auction house portal Barnebys shares with us a history of the revolution!

Resident, Melissa Bakth is also causing a stir with her new Barbican based businesses – Supper Club and Short Eats (ingredients to your door) – and introduces us to her family and creative inspiration!

We keep up with our own foray into alternative points of view with a critique on the new Music Centre planned after the museum moves to Smithfield.  Phineas Harper argues for less shining cathedrals of global culture one-upmanship and more local arts spaces for the many.  Our next issue in December is already in the planning stage.  I’m looking for more opinions to share and debates to begin, so do get in touch if you’d like to put something out there in our Alternative Voices section.

Joe Coten delves into the increasingly relevant lease extension issue and he also has a competition for you to get your teeth into.

When you’ve whet your appetite on this, take a look at the restaurants we’ve covered in the last few months.  All the restaurants and drinking holes we take you to are easily within walking distance – we are so utterly spoilt when it comes to choice!

Lastly, I wanted to share with you a couple of the old predecessor magazines which I’ve been sorting through (I was born a librarian and find no greater joy than a good organise): 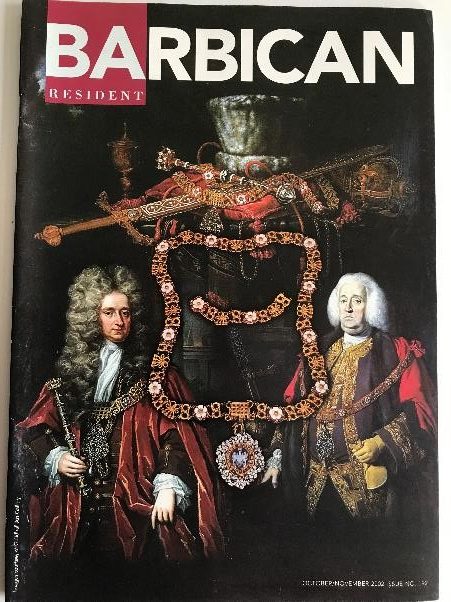 Cover image from Barbican Resident Oct/Nov 2002 – the inside cover gives some detail: The insignia of the City of London, attributed to Pieter Gerritsz van Roestrateb (1630-1700), shows the insignia resting on a cushion.  Most items, however, are rarely seen except on occasions such as the Silent Ceremony and in the more public Lord Mayor’s Show. [note to Readers, diarise 9th November 2019 for this year’s Lord Mayor’s Show] 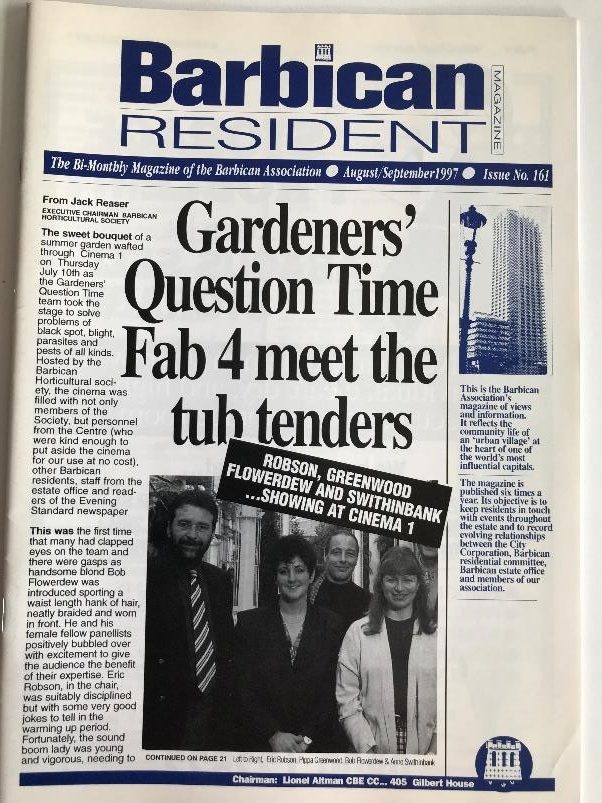 Going back even further, I found a copy from 1997.  At the Barbican@50 Festival, I will have some old copies for you to leaf through.  They are a fascinating insight into the issues which we were dealing with at the time!

Warm wishes for a wonderful autumn from all of us on Team Barbican Life!