Beautiful Books: Dickens and the Business of Christmas

Beautiful Books: Dickens and the Business of Christmas 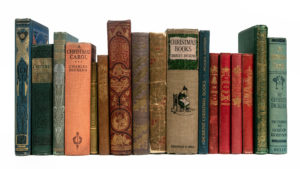 ‘Welcome everything! On this day we shut out nothing!’

HOW CHARLES DICKENS BROUGHT CHRISTMAS BACK INTO FASHION

A new exhibition exploring a Victorian publishing phenomenon and a string of Christmas books by Charles Dickens that continue to influence the season more than 170 years after they were written, opens this November at the Charles Dickens Museum. Beautiful Books: Dickens and the Business of Christmas will show how Dickens’s A Christmas Carol began a series of books that would shape and colour Christmas in ways that we still recognise today. The exhibition runs from 20 November 2019 to 19 April 2020 at the Museum at 48 Doughty Street, the London residence where Dickens wrote Oliver Twist and Nicholas Nickleby, completed The Pickwick Papers and began Barnaby Rudge.

The modern idea of Christmas emerged in the first half of the nineteenth century. In newly-industrialised Britain, the technological advances which revolutionised the work of bookbinders, printers, typesetters and illustrators, also prepared the perfect conditions for Dickens to introduce A Christmas Carol to the world. As production, distribution and consumption grew, so did the middle classes with spending power. Christmas encouraged eating, drinking and present-giving and became an important time of year for the transformed publishing industry, which supplied a wealth of beautifully-designed books just waiting to become ideal Christmas presents.

Written in six weeks in the winter of 1843 (to ensure its publication before Christmas), A Christmas Carol was short, small and handsomely bound with a gilded, salmon-brown cover and cost less than half the price of the Christmas annuals with which it shared bookshop shelves. 6,000 copies were sold in the six days between its release and Christmas Eve that same year – and it has never been out of print since. At the time of publication, one critic declared it ‘a national benefit to every man and woman who reads it…’ Every year for the next 24 (with only two exceptions), Dickens published books, stories and special texts for his readers at Christmas time.

In the exhibition, letters from Dickens to publishers and illustrators will reveal his eagle-eyed scrutiny of the design, illustration and production of his books. The exhibition will feature the earliest sketches and illustrations of Scrooge, Fezziwig and the Christmas ghosts by John Leech that would adorn the 1843 first edition of A Christmas Carol, an early ‘trial’ edition of the book in green and red and the first edition, inscribed by Dickens to his friend William Macready on New Year’s Day 1844. The exhibition will also show how technological advances changed the reading experience – Dickens’s own taper stand and oil lamp will feature.

One of the star exhibits is the world’s first printed Christmas card, alongside its proof copy. The hand-coloured lithographed card, made in 1843 (the same year as A Christmas Carol’s publication) by Henry Cole, Joseph Cundall and John Calcott Horsley features a family celebrating Christmas, flanked by images of Christmas charity. 1,000 copies were printed and sold for one shilling per card. In spite of its originality, the card was not a success and the next card designed for Christmas would not appear for another five years. However, eventually the idea took off: in 1877, 4.5 million Christmas cards were posted.

Beautiful books are at the heart of Beautiful Books; it will feature a wealth of extravagantly decorated editions, stamped, cloth-bound books illustrated with woodcuts and steel plate engravings, gift books, almanacs such as Forget-Me-Not and The Keepsake, and even a collection of tiny books.

Christmas expanded so rapidly that, by the 1860s, Dickens was complaining that the market was flooded with material. He began to distance himself from the festival of gift books and stocking fillers, and passages in his own stories, such as Great Expectations and The Mystery of Edwin Drood, grew noticeably darker in tone and subject. However, Christmas continued to grow…

Cindy Sughrue, Director of the Charles Dickens Museum, said, “Dickens and Christmas will forever be linked and his influence on the season remains as strong as ever. In the nineteenth century, Dickens became king of the commercial Christmas. Changes in the country created the perfect conditions for him to publish A Christmas Carol – a thing of beauty, both in content and presentation. While his tale celebrates the importance of family, loved ones and generosity of spirit, it was part of a massive commercial Christmas explosion – a dichotomy which would come to irritate Dickens later in his life.”

Beautiful Books is a collaboration between the Charles Dickens Museum and Maggs Bros. Ltd, one of the largest and oldest antiquarian booksellers in the world, which is providing expertise and artefacts in equal measure. The exhibition’s Guest Curator is Simon Eliot, Professor Emeritus of the History of the Book at the Institute of English Studies, School of Advanced Study, University of London. The Museum is grateful to The Brick Row Book Shop, San Francisco, California, for generously loaning the world’s first Christmas card and to St. Bride Library for equally generous loans throughout the exhibition.