While this is not exactly restaurant news, Berkmann Wine Cellars reckons to be the largest family-owned and family-run wine importer in the UK. The company has been selling wine to restaurants since 1964 and its expertise has grown along with its portfolio. Today, the company is headed up by second-generation family member Rupert Berkmann. The wineries it represents are said to also be progressive and fiercely independent.  Thus an invitation to attend its hugely impressive annual wine tasting experience – particularly given it was held at The Brewery on Chiswell Street, only a stone’s throw from the Barbican, was taken up with relish.

The company’s aspiration is to be more than just another wine supplier. It acts as a valued partner, bringing its customers not only delicious wines, but also unrivalled service and know-how which enhance the success of their businesses.

Berkmann says it gives support, advice and bespoke training to help restaurants, hotels and bars provide an unbeatable wine experience for their customers. By combining national buying power with local knowledge, it reckons to deliver competitive prices and unrivalled service across every region of the UK.

From its origins in the restaurant business, Berkmann’s unique scale and reach extends across all trade channels, bringing Berkmann service and on-trade flair into the retail environment.

With both the customers it supplies and the producers it represents, Berkmann’s aim is the same: to foster proactive, long-term partnerships and create sustainable mutual success.

As agents, the company currently represents wineries from more than 20 countries, and says to have an exceptional track record in strategic brand management and channel segmentation. It offers producers a full range of routes to market, which are actively managed to avoid conflict, allowing their wines to reach their full potential in the UK trade. 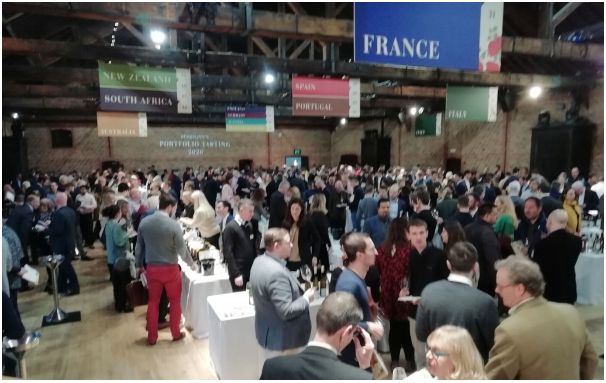 The Porter Tun room at The Brewery set out with the various tasting tables.  The picture gives an idea of the huge scaleof the all-day tasting event and the number of attendees

In the event, the wine tasting at The Brewery (very convenient for the Barbican) was extremely comprehensive with over 450 wines available for sampling encompassing nearly every wine growing region around the world.  Most of these I was pretty familiar with in terms of knowledge of wine production so I mostly restricted myself to sampling wines with which I was completely unfamiliar, along with some favourites.  Standouts among the totally new wines (to me) were a light red from the Greek Islands, reminiscent of an excellent BeaujolaIs, and an extremely impressive dry sparkling champagne-type wine from southern Brazil.  However one was unable to do justice to many other wines available for tasting – even a small sip from only a fraction of the wines being shown, let alone some spirits and wine-based cocktails also being shown off, would probably have resulted in my being carried out horizontally.

Wines were available for tasting from some 21 different countries including from less well known wine growing areas from nations like Brazil, Georgia, Lebanon, Slovenia and Turkey.  Berkmann specialises in providing wines to the restaurant trade so no doubt many of these will be available in ethnic-themed restaurants, and it behoves one to try many of these out to know what to choose when one is presented with a wine list that features wines from the same region as the cooking from some of these establishments. 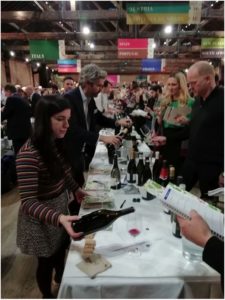 But the event was much more than just a wine tasting opportunity.  There were accompanying workshops, a lunch provided by Dabbous split into three sessions where suggested wines were paired with the various courses as suggested by Veraison, which also provided a wine pairings table where we found the excellent Greek wine mentioned above, and a discussion panel entitled Trend, Talk, Taste.

Berkmann says its customers are at the centre of everything it does; theatre and entertainment help evangelise wine to the consumer (as well as increasing wine sales). So, whether it’s large-scale tastings, intimate winemaker dinners, focus tastings, themed wine nights or even picking grapes at harvest – Berkmann reckons to offer it all!