The Clerkenwell/Smithfield/Barbican area is certainly becoming one of London’s main culinary destinations, with at least three new restaurants opening here in the past quarter – two within a day of each other in early May.  The first of these is chef Alan Bird’s fascinating, restaurant and bar meets private club establishment in a now elegant Georgian townhouse in Smithfield Street opposite the south side of the Smithfield meat market complex. 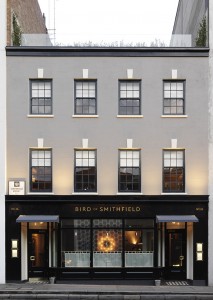 Bird of Smithfield is thus the long awaited venture by Chef Alan Bird. With over 15 years heading the kitchen at one of London’s most iconic restaurants, The Ivy, and as a former Group Executive Chef at the International Soho House Group, Bird has received widespread recognition from both peers and trade. He has really stamped his mark on this new venture which is able to satisfy a variety of demands, offering many of the attributes of a members club with no membership required.The new bar restaurant complex is set over the full five floors of the building with a roof terrace at the top which will really come into its own when we have a decent spell of good weather.  Below that is a private dining room which can be hired – at the moment only for the cost of food and drinks consumed.  This is a really impressive large room – standard layout is for a long table which would seat around 18 and a comfortable lounge area, all adjacent to the kitchen, but the room can be reorganised to seat more for bigger parties.  As with everything else in the building it is beautifully decorated giving the feel almost of a dining room in a private mansion. 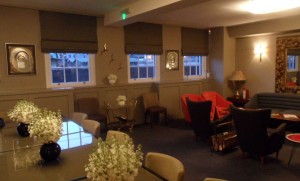 Next down is the restaurant – fairly small, seating only around 40 people.  Plain wooden tables, comfortable chairs and banquettes with a bar at one end – again all impeccably decorated and hung with impressionist (and one almost cubist) paintings. 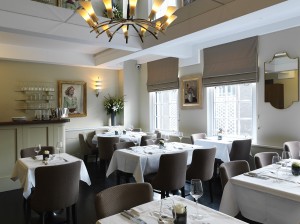 Below that, at ground level is a really comfortable lounge bar area which serves its own bar menu – which includes an extremely impressive, and reportedly extremely tasty hamburger option, while below that in the basement is the equally impressive Birdcage cocktail bar, although food is not served here.

One thing that is worth mentioning here, though, is that there is no lift in the building, so disabled access, if not impossible, would be extremely difficult to most of the building’s rooms.

The restaurant’s menu could perhaps be described as modern British cuisine; with dishes aiming to explore the influence British food has had both historically and presently. The menu is not over comprehensive, which is very much a positive, making the chefs able to take great care over the preparation of the dishes which include a number of British staples, but virtually all with an interesting twist and with some unusual ingredients – including edible flowers as decorative elements.  (The white garlic flowers are indeed tasty in their own right!) 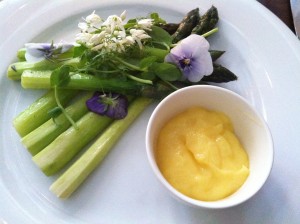 I had already had a positive report on the new restaurant from Barbican resident Hannah so we looked forward to our meal and were not disappointed.  The asparagus starter with hollandaise was excellent as was the Dorset crab which came as a triple with what appeared to be a crab mousse on top of an avocado mousse and then a layer of crab meat, served with toast.  For the main course, this was a difficult choice for, although the menu is not overlong, there were plenty of dishes which appealed.  I settled for calves liver and bacon, served on mashed potato and caramelised onions, with a side of sprouting broccoli with slow roast garlic and chilli.  Only small criticism was that perhaps the bacon was over hard – more crunchy than expected.  My companion had Torbay slip sole, served on the bone, with brown shrimps (or crevettes grises as the Belgians would call them) with sea purslane and sea beat, which was reckoned to be excellent.  Barbican resident Hannah had had Alan Bird’s special shepherd’s pie which is one of the restaurant specialities.

Dessert time – and again a nice selection to choose from.  After some humming and hahing  we chose to share a plate of iced summer berries, strawberry meringue, elderflower jelly and yoghurt sorbet which also is highly recommended.  This was followed with a jing tea for my companion (Jasmine silver needle) which was prepared and infused to the second (timed with a stopwatch).  I passed on this end to the meal largely because they did not have a decaffeinated coffee option, although we were told that this omission would be corrected.

Altogether an excellent meal, very good and friendly service – indeed all the staff we came across were exceptionally polite and helpful.  Cost with a couple of glasses of wine each would have been around £50 a head which nowadays is not unreasonable for the area. 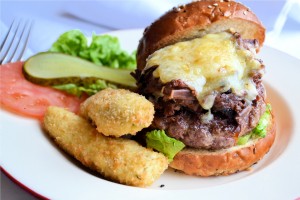 Burger avaialble in the bar

Bird of Smithfield is open weekdays for lunch and dinner (breakfast also available at weekends) while the bar is open through the day.  Hours are from early to midnight Monday to Wednesday and to 2 am Thursday to Saturday.  Sunday hours are 9am to 5 pm.  Bird is at 26 Smithfield Street – Phone: 020 7559 5100.probably essential for the restaurant, but the bar, with its own interesting menu, is booking free, but you might need to arrive early to get a table.  Website – still under construction but does show the menus and enables online booking – www.birdofsmithfield.com