One of the big advantages of living in the Barbican/Clerkenwell/City area for those who like eating out is that one is really spoilt for choice in terms of high quality restaurants to frequent. We have a half dozen Michelin starred restaurants within walking distance of the Barbican, and a number of others that are also rated very highly indeed by guides and internet dining sites.
One of these latter is the Bistrot Bruno Loubet at The Zetter Hotel on Clerkenwell Road at St. John’s Square. We had eaten there before – several years ago for dinner soon after it first opened, and were impressed then. Recently we returned for lunch and, if anything, found the food as good as, and service perhaps even better than, we remembered them from the first occasion.

Bistrot Bruno Loubet exterior from Clerkenwell Road
The gap since our last visit has seen the appointment of a new on-site head chef, David Fogelman, formerly of Michelin starred St. John, who has been developing the French cuisine oriented menu in conjunction with famed chef Bruno Loubet, the inspiration behind the restaurant.
A bistro – or the more trendily named bistrot – in the French manner is described as a small restaurant, serving moderately priced simple family-style meals in a modest setting and bistros are defined mostly by the foods they serve. However in the London context they often tend to be a little more up market than this description would suggest and more adventurous with their dishes than in the original Parisian connotation. And Bistrot Bruno Loubet certainly falls into this latter category. 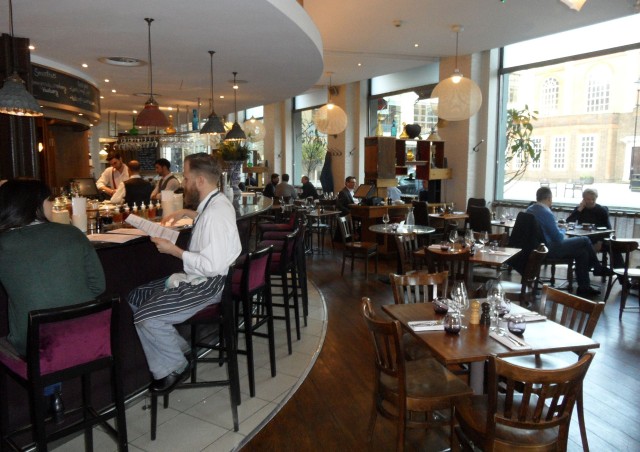 The nicely bright bar/restaurant area at around 3.30 pm after the lunchtime rush had quietened down
While the bistro sports an a la carte menu, plus daily specials written up on a blackboard – and also described to us by our attentive waitress – at lunchtimes, and early evenings (6 pm to 7.30 pm), there is a prix fixe option available for the daily specials – £20 for two courses and £25 for three which can reduce the overall cost, particularly with the mains costing up to £28.50 (for the rib-eye steak) on their own.
We started with the French onion soup served in a bowl completely overflowing with an enormous cheese topping. My dining companion had been recommended this by a friend and she wasn’t disappointed. I had crispy pigs trotters – partly on the grounds that I don’t think I’d eaten pigs trotters beforehand. The very tender meat was layered, pressed into a square and crumbed and perhaps pan fried into an overall starter which was both tender and tasty. This dish may well have come from David Fogelman’s nose-to-tail culinary experiences under the tutelage of Fergus Henderson at St. John. 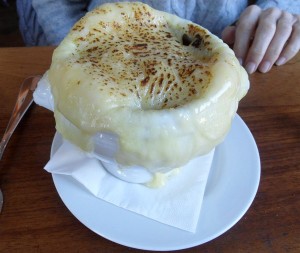 The French onion soup with its spectacular cheese topping
For her main my dining companion had the guinea fowl boudin blanc served on a bed of pearl barley with pumpkin. Perhaps not the most appetising looking dish, but cooked to melt-in-the mouth perfection. I ordered rolled saddle of rabbit off the daily specials menu – again cooked just right with the pieces of rabbit surrounding what I assume was a rabbit kidney. Another very tasty dish indeed . This used to be a regular item on the main menu, but the menu changes depending on season and, in this case, the availability of rabbit meat of sufficient quality. This rabbit was delightfully tender and not dry as rabbit meat can tend to be. 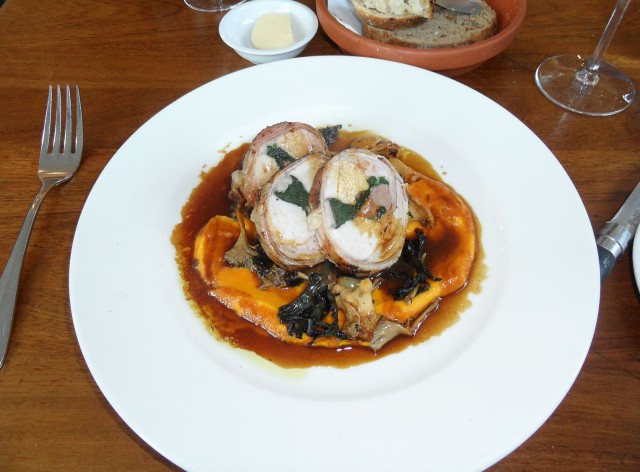 For dessert we shared a trio of sorbets – apricot, apple and raspberry. The sorbets are all made daily in the bistro kitchens and the fruit used varies from day to day dependent on what is available that day.
The restaurant was busy, with a nice atmosphere. With large windows all around it is pleasantly bright. Floor and tables are wooden without tablecloths, in keeping with the bistro vibe, but as we noted earlier perhaps the food quality belies the bistro description. Prices are also perhaps higher than one might expect from a true bistro though. Starters came in at from £7 to £9, Mains from £12.50 to £28.50 (for the rib-eye steak) and desserts from £5.50 to £6.50. While the mains are mostly served with some kind of accompanying vegetable making up the dish, other vegetables come as side orders at £3.50 or £4 per (generous) portion.
There is a decent wine list with a very good selection available by the glass too. Personally nowadays I tend to go for wine by the glass so one can match the wine selection with the different courses without over-imbibing so when the wine menu actually has a section featuring wines by the glass, as in this case, that tends to be a positive in my eyes. We started with a very pleasant prosecco (£7), and I followed up with a Spanish Tempranillo/Merlot (£ 6) and my dining companion a Vouvray (£6) also described as very pleasant. There is evgen a range of dessert wines offered by the glass for those who want them.
The by-the-bottle wine list has a couple of lowish cost options for the lower budget diners at £18.50 for a white Languedoc Ugni Blanc offering and a Cotes de Gascogne red blend at £19.50. Otherwise wines run from the low £20s up to £255 for a 1998 Pomerol if you’re feeling really flush! Not really a typical French bistro type offering.
Bistrot Bruno Loubet at the Zetter, St John’s Square, 86-88 Clerkenwell Road, London EC1M 5RJ. Tel. for reservations: +44 (0)20 7324 4455. Email: eat@bistrotbrunoloubet.com. Website: www.bistrotbrunoloubet.com (bookings may also be made directly from the website)