UPDATE:  Chabrot Smithfield appears to have closed down since we wrote this review.  It never really took off and, at the time of writing (Oct 1st 2014) has been closed for over 2 months.  No information on whether it will be resurrected

The Smithfield area is becoming a bit of a haven for real French food enthusiasts.  There are the long established Cafe du Marche off Charterhouse Square, the three Gascon establishments (Club Gascon and Cellar Gascon in West Smithfield  and Comptoir Gascon on Charterhouse Street and the more recently-opened Morgan M Barbican on Long Lane.  Now these have been joined by an offshoot of the much acclaimed Chabrot Bistrot des Amis in Knightsbridge with the brand new Chabrot Bistrot des Halles in Long Lane, although admittedly this has replaced yet another French restaurant, the St Julien, which closed late last year. 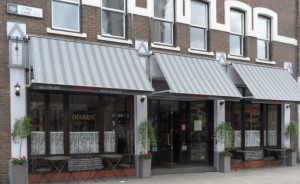 The big question is can the new establishment hold its own with the existing ones already in the area?  The answer is definitely yes, particularly with respect to the excellently priced set menu availability which can certainly cut the cost of an evening out.  On the a la carte front though, the local Chabrot is priced mostly at the medium end of the scale, but there are some relatively low cost options so eating out there, and experiencing the restaurant’s gallic charm, can be quite reasonable.  The quality and taste of the food we experienced on a recent visit is indeed excellent.

But firstly a note on the set menus.  There is a two course set lunch at £14.50 and a three course set dinner at £19.50.  With a bottle of house wine(Vin de pays de Cotes de Gascogne) two people could thus eat at around £60 plus tips which is good value.  There is no menu per se for this but what is available day to day on the menu is presented verbally.  One suspects steak frites will be one choice available most days, while other dishes may be on the a la carte menu, may be daily specials.  For example, when we visited the starter special was asparagus in a truffle sauce  and a fish option on the set menu was lemon sole, although this was not on the a la carte.  Desserts offered were two of the items on the a la carte menu.  Overall  the cost of ordering those dishes which were on the a la carte menu would have totalled around £25, so there is definitely a saving here.

Chabrot is the second restaurant opened and run by operations director Yann Chevris, Michelin-starred chef Thierry Laborde and celebrity florist Pascal Lavorel, being a follow-on from the successful Knightsbridge establishment which has gleaned some great reviews from the professional reviewers.  It specialises in southern French bistrot style cooking.  The Smithfield menu differs from that at its Knightsbridge sister, although some of the signature dishes are available at both – Cote de boeuf for example, or shoulder of lamb – both dishes only available if two diners wish to partake. 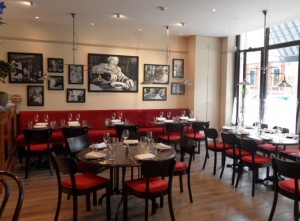 For our meal my dining companion was sold on the evening set menu – choosing asparagus in truffle sauce (excellent) and steak frites.  The latter was a bavette, which sometimes can be tough, but flavourful, but in this case was exceedingly tender and tasty.  (Talking to chef Thierry Laborde, who alternates between the two Chabrot restaurants, afterwards he said this was down to careful choice of meat and an excellent supplier).  Indeed it was compared favourably to a fillet steak at the Hawksmoor, which is praise indeed.  Interestingly we were not asked how the steak should be cooked – it was produced medium rare which is how she would have ordered it anyway and one suspects this is very much the chef’s view of how a steak should be prepared.  The frites were extremely good and a plentiful serving.

I chose chipirons (baby crispy squid) as a starter,which were tasty and tender – not always the case with squid in the UK – followed by Cote d’agneau (thinly cut lamb chops) with thyme served on something akin to a ratatouille.  Very tasty but perhaps could have been a little hotter.  For dessert we chose chocolate mousse and a lemon sorbet in Armagnac – again excellently prepared and delightful. 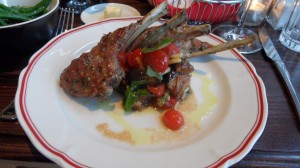 Wine: we washed this down with a bottle of their house red – a Cotes de Gascogne – which was remarkably smooth with a great bouquet.  The wine list is an all-French one and the house wines do represent decent value at £19.50 a bottle.  There are some wines available by the glass – otherwise the list is fairly pricey mostly from £30 plus a bottle and higher.  There is a selection available by the glass of in half litre carafes.

Decor and ambience is good and definitely French, although the latter could perhaps be improved by slightly more subdued lighting in the evenings.  One feels the overall impression to a passer-by once dusk has fallen would be more welcoming if the main lighting elements could be dimmed a little.

Chabrot, Bistrot des Halles, is indeed a very welcome addition to the area close to the Barbican, with great food and mostly reasonable prices by area standards.  Indeed my companion was so impressed she booked a table for 6 in around ten days time – and is also looking at taking her mother there for a birthday lunch!  For someone whose job involves interacting with restaurants all around London that is praise indeed.

Chabrot Bistrot des Halles is open for lunch and dinner Monday to Friday and for dinner on Saturdays.  It is currently closed on Sundays, but is considering opening for Sunday brunch once the owners have had a chance to assess the likely market.  For reservations call 0207 796 4550.  Website (online bookings available) www.chabrot.com and it is located at 62-63 Long Lane.