The latest major restaurant destination in the City is the new Bloomberg Arcade, which joins the two sections of the brand new Bloomberg development near Bank.  It puzzles the editor where the clientele will come from given the huge number of new restaurant openings in the City area over the past two to three years.  Obviously prosperity and disposable incomes, or perhaps just the spending habits of millenials, are running higher than is generally credited. 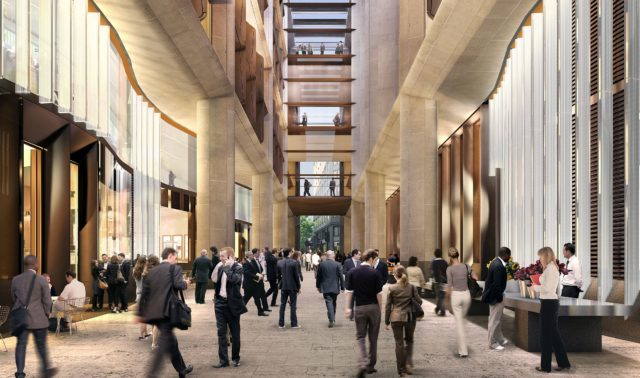 The taste of Hawaii, in the heart of the City, this is sunshine in a bowl: fresh fish and raw vegetables combined with your choice of rice, quinoa or kale.

Sizzling Indian barbecue from the team behind Gymkhana, in this drinking tavern inspired by a traditional Indian army mess hall.

All-day dining, house-roasted craft coffee and a cocktail bar showcasing fresh and bold flavours from around the world, inspired by a lifetime of travel. A sun-drenched terrace makes Caravan a perfect spot for after-work drinks.

Award-winning 20-inch pizzas, served whole or by the slice. Homeslice gives its own take on the classics – using seasonal ingredients to create unique flavour combinations.

Regarded as the home of the best Udon noodles in London, Koya specialises in traditional Japanese dishes plus a uniquely Japanese breakfast menu, from the team behind the popular Soho restaurant.

The second London restaurant from Michelin-starred chef Andrew Wong, Kym’s menus focus on the ancient craft of Chinese roasting, paying homage to the many gastronomic regions of China and the creativity and craftsmanship of London’s Chinatown.

Inspired by the wine bars of Spain and Italy, Vinoteca offers an eclectic selection of 200 wines alongside paired dishes created with fresh, seasonal produce.