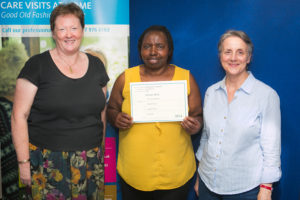 When Zimbabwean care assistant Norma  Nwango started to provide live-in care to Paddington-based Priscilla Campbell-Allen, her family weren’t sure the pair would have much in common; but a year on, Norma has won a prestigious award for her outstanding care and the two are the best of friends.

Priscilla’s family enlisted the help of Norma, from Bluebird Care in Hatherley Street, Westminster in August 2015. Norma subsequently had such a positive impact on Priscilla that the care provider nominated her for the national Dementia Pathways’ Margaret Butterworth Award for Excellence in Dementia Care.

Care manager Beverley Smith said: “Norma is a very worthy recipient as she always goes the extra mile for Priscilla. She has worked tirelessly to get to know everyone in Priscilla’s social circle and all the professionals and people involved in her support. Priscilla describes Norma not as her carer but as the most important person in her circle of support and friendship.

“Norma has definitely leapt a cultural barrier with Priscilla. They have had quite different lives but now they have learned to live with each other and get on well. Norma has helped Priscilla to maintain her independence whilst living with dementia.”

Norma said: “I am delighted to have won the award. I get so much satisfaction from being with Priscilla and knowing I am making a difference to her life.”

Bluebird Care director Peter Slough added: “We are delighted for Norma that her outstanding level of commitment and care resulted in her winning the award. As an organisation we play an active role in trying to ensure that people with dementia across the Cities of London and Westminster are still able to be part of the communities they live in and Norma has ensured that Priscilla is able to lead an active social life.”

Priscilla’s niece Jane Morris said: “Norma has been a pillar of strength, someone we as a family can rely on to look after Priscilla and to calmly deal with any problems. She reliably looks after Priscilla’s health and well-being, but also makes real efforts to get her out and about to the shops and to visit friends. Priscilla has formed a real bond with her, to the extent that she looks forward to her return every time she goes away for a break. Initially we had concerns that she would not easily get on as they have very different backgrounds. “