Female Determination: inspirational women who forge their own paths 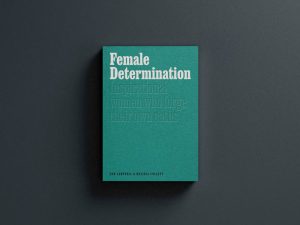 Soon after the Lionesses won their historic victory at Wembley, there couldn’t be a better time to celebrate women’s achievement than with the publication of a new book entitled: Female Determination: inspirational women who forge their own paths. Launched at the end of July at a sold-out event at the Barbican Library, this book was co-authored by Barbican resident, Melissa Collett, in collaboration with professional photographer, Tom Campbell.

It features twenty-two stories and portraits of women from a diverse range of backgrounds: from the boardroom, the stage, politics, media, health, tech and more, who are changing the world for themselves and others. In these photos and stories there’s a lot of food for thought – about the women, us, the world we live in, personal choices, influences, and how and why to make meaningful changes. The book is peppered throughout with inspiring quotes and each account is an engaging read. With a foreward by Dame inga Beale, former CEO of Lloyd’s of London and its first female CEO in its entire 300+ year history, the book contains a lot of firsts. From the first female Director of the National Theatre to the first black female Member of Parliament to speak from the dispatch box.

Do we need another book about inspirational women? The author answers this question in her introduction with an emphatic ‘yes’. Collett explains why she created the book: ‘to inspire other women, to celebrate women’s stories and to encourage our daughters and the next generation of women to greater heights…I can’t imagine anyone picking up the book and not finding a story that they can relate to, something that gives them that extra nudge to push harder for what they desire and deserve’. It is a welcome addition to the growing number of books highlighting women’s accomplishments and judging from the Lionesses’ victory, there will be plenty more to celebrate in the years to come.

Female Determination: inspirational women who forge their own paths is available on Amazon or on loan from the Barbican Library.

Melissa Collett, is an executive director of a professional institute for financial services in the City and has been a lawyer, ombudsman and tribunal judge. She regularly speaks about career development at events for women and young professionals.

Tom Campbell is professional photographer specialing in portraits of people at work. His subjects include prominent figures in sport, media, politics, creative and financial sectors and his work has been commissioned by the City of London, Paribas Real Estate, Playstation UK, CBRE and many others. 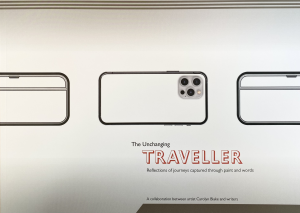 Since 2019, artist Carolyn Blake has been working on ‘The Unchanging Traveller’ series which is ongoing…   As a passenger she is contained within a non-space with a view through a train window. For her the fascination is the contrast of the manmade placed within the natural landscape. Passing at speed and recalling in a split second, makes one a neutral observer, allowing a momentary glance to be suspended. Within a split second the recognition of something and the action of recording takes place and the unremarkable is given a presence and it is the unremarkable being given a presence which breathes new life into her paintings. She records the non-event in the everyday, bringing to life the inconsequential and non-memorable. What is glimpsed as a snapshot, be it a colour, a shape or a structure, is recalled in a split second and becomes suspended in time.

A selection of ‘The Unchanging Traveller’ paintings have been used in a book of the same title, incorporating texts written by poets and poetry societies from Bedfordshire, Hertfordshire and London. 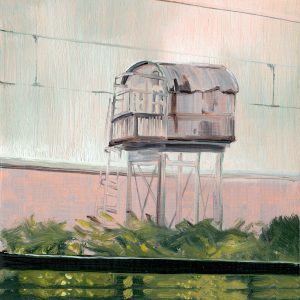 The idea was to offer an opportunity for people to respond to these paintings in their own way over a period of a few months. The outcome is quite extraordinary: a fusion of responses, ideas and inspirational moments.

The book is dedicated to John Gohorry – a prolific poet who lived and worked in Hertfordshire. His work appeared in His work appeared in The Times Literary Supplement, Oxford Poetry, The Spectator, London Magazine, Critical Survey, Poetry Review, Poetry Durham, Encounter, The Antigonish Review. He also won numerous prizes including the Keats-Shelley prize for Poetry in 2008.

There are copies of this book currently on sale at The Ikon Gallery shop in Birmingham or it can be bought directly from the artist.