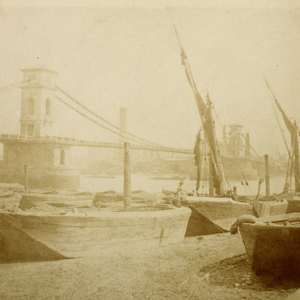 At the Museum of London, the major, free visual arts exhibition, Bridge, opens 27 June. As part of the exhibition, throughout July you can see a rare photograph from the mid-1840s. Due to its delicate nature, this is the first time the photograph has ever been on public display and you will only be able to see it until 31 July – make sure you don’t miss out!

Bridge is the largest art exhibition ever to be staged at the Museum of London Docklands. Drawing on the museum’s significant art collections, the exhibition will feature rarely seen contemporary and historical artworks, alongside photography and film to consider the significance of bridges within London’s landscape.From Hungerford to Blackfriars, Westminster and Millennium, Bridge also looks at how London’s bridges allow people to move around and experience the city. Thomas Heatherwick’s ambitious ‘Garden Bridge’ proposal, playing with the ideas of destination and crossing will feature, along with other debates and issues confronting London and its bridges today.