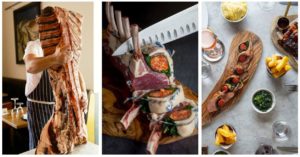 A paired Jura whiskey cocktail menu has been created to accompany this event.

‘It has been fantastic to collaborate with Team England on the menu available at Paternoster Chop House”. Says James Hulme. “As a chef it is important to work hand in hand with the best British butchers and suppliers to help educate the public about natural, locally sourced food that the UK should be proud to eat!”

CEO of the World Butchers’ Challenge, Ashley Gray commented: “Chefs are often considered the rock stars of the culinary world and whilst that’s absolutely deserved, I strongly believe that butchers should be part of that same group. The challenge was created to celebrate and shine a light on the incredible talent, skill and craftsmanship of those in the trade. We’re extremely thrilled to have a renowned London steakhouse supporting our British team and profiling these butchers to a wider audience.”

The World Butchers’ Challenge is conducted over three hours and fifteen minutes. Competing teams have a side of beef, a side of pork, a whole lamb and five chickens to transform into a themed display of value-added products, designed to inspire and push the boundaries, yet which are also cookable and would sell in a retail setting. Independent judges score each team based on technique and skill, workmanship, product innovation, overall finish and presentation. www.worldbutcherschallenge.com