An illustrated guide to Britain’s finest examples of Brutalist architecture

Brutalist architecture has a growing number of admirers who are finally questioning Prince Charles’s claims of concrete carbuncles made nearly 40 years ago. Yet these dramatic, monumental buildings are finding favour as part of Britain’s skyline while also being increasingly threatened with demolition. Elain Harwood spent her holidays for a year travelling by train and bicycle seeking out surviving examples.

Brutalism was an architectural response to Britain’s greatest wave of levelling up between north and south, rich and poor, in the 1960s. It was far-sighted and well-meant, if crippled by unrealistic goals, uncertain funding and local corruption. Brutalist Britain assesses the finest architectural survivals from those heady times.

Featured is a mix of well-known landmarks such as London’s National Theatre and Trellick Tower and the sublime Apollo Pavilion in Peterlee, and obscure buildings that deserve to be better known, from a primary school in Mold, north Wales to a sports pavilion in Oxford and children’s slide. Here are also brutalist private houses, flats, places of worship, offices and more, while an introduction places British brutalism within the context of global events and contemporary world architecture. 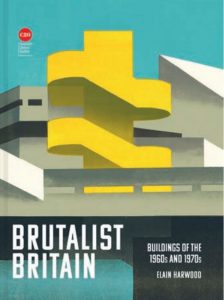 Harwood’s authoritative yet lively writing is supported by largely new photography that captures these dramatic structures in all their glory, some on the point of demolition.

Brutalist Britain is the latest book in Elain Harwood’s series on 20th-century architectural styles, published in collaboration with the Twentieth Century Society. Previously published in this collectable series are Mid-Century Britain and Art Deco Britain, with covers by Paul Catherall, and Post-Modern Buildings in Britain, with Geraint Franklin.

Elain Harwood is one of the UK’s foremost architectural historians. Working as a senior architectural investigator with Historic England, her research has contributed to the listing of many 20th-century buildings. She is the author of several books for Batsford including Art Deco Britain, Mid-Century Britain and England’s Post-War Listed Buildings, and won the Alice Davis Hitchcock Medallion and Art Book Award for Space, Hope and Brutalism: English Architecture 1945-1975. She also gives lectures and leads architectural tours – by coach, foot or bicycle – for the C20 Society.