In the Clerkenwell area we are used to restaurants coming and going as they fall in and out of fashion, but the Café du Marché, down a narrow alley off Charterhouse Square, next to the Malmaison Hotel, seems to go on and on – virtually unchanged in its popularity among those who know of it.  It’s not easy to find if you are unaware of its exact location and it certainly picks up no trade from people passing by, spotting it and deciding to give it a try.  The narrow alley is a dead end, so no passing trade, but it makes for a location which one could envisage as being in the middle of rural France, rather than in the heart of one of the world’s great metropolises. 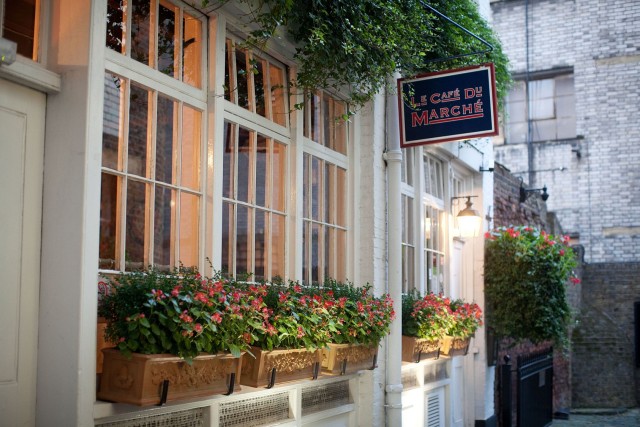 Indeed this year the Café will celebrate its 30th year of existence having been opened in Summer 1986.  Indeed I was taken there around that time by my brother-in-law, who was then running the London end of Australia’s Westpac bank and who was always one to find the best new restaurants in the city in which he was living at that time.  My recollection of the meal is somewhat hazy, but it will no doubt have been top class French-style cooking and a great ambience – and these attributes remain so today.  Indeed if not the restaurant would not have survived so long.

Food at the Café du Marché is not Michelin-starred fancy cooking where as much, perhaps even more, attention can be paid to presentation as to the cooking itself – but rustic styled relatively unpretentious French cuisine, and perhaps all the better for that.  It offers a set menu price of £32.95 for two courses and £37.85 for three.  If you want the restaurant’s flagship Côte de Boeuf (for two people), there’s an additional £9 charge.  With generous portions, two courses would probably be more than adequate for most people!

The restaurant is so named because of it being close to Smithfield Market and is located in what was once an old warehouse.  There is a second restaurant under the same management in the building – Le Rendezvous de Café – which utilises the same kitchen which offers an a la carte version of the menu at lunchtimes and nowadays also serves breakfast.  It can be taken over for private functions in the evenings.  More and more area restaurants are open for breakfast nowadays, perhaps mirroring an American trend – indeed breakfast menus may well offer the best value meal options around.  Tables at Le Rendezvous spill outside in fine warm weather.

With a family lineage hailing from the French culinary capital of Lyon, the original restaurateur, Charlie Graham-Wood, sought to bring straightforward, honest French food to his tables. Almost three decades later, four of his core staff remain: executive chef Simon Cottard who trained under the Roux brothers, general managers Roberto Muscas and Carlos Ruiz and Keith Davies, pastry chef, the latter three joined Charlie from the Restaurant Ship Hispaniola. Remaining an independent, family run restaurant, his daughter has joined the team. Together they continue to carry out Charlie’s vision.

With exposed brick walls – seemingly all the rage nowadays among many new restaurants – Le Café du Marché was obviously ahead of its time in this respect – and wooden beams, the restaurant ambience is very much rural, but its white tablecloths give it a slightly more upmarket feel.  There is unobtrusive live music provided by a pianist and bass-player, contributing to the overall atmosphere.  It is a veritable oasis of rural chic in an urban heartland.  The venue also hosts special music nights, mostly in its upstairs additional restaurant area, Le Grenier.

And the food lives up to the ambience.  The menu is changed every five weeks, but primarily comprises French rural classics, but nowadays tempered with some more international elements.  Likewise the wine list includes one or two non-French offerings in addition to classic French vintages.

The set menu price does include delicious freshly baked French bread.We started with a classic French fish soup served with croutons, grated cheese (Emmenthal?) and a great rouille – my idea of a heavenly starter, although probably not to everyone’s taste.  This was very good indeed. 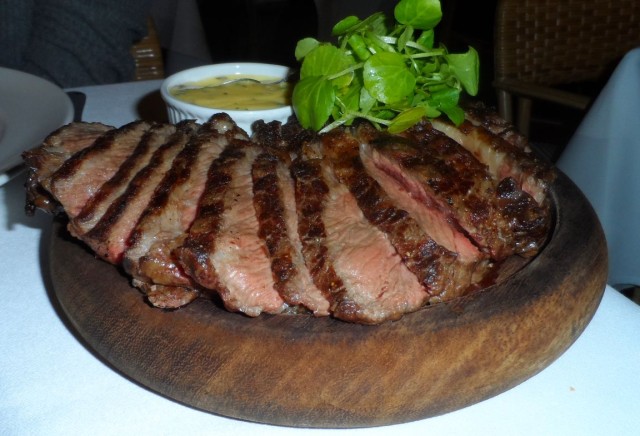 We followed with the Côte de Boeuf with béarnaise sauce – beautifully served – sliced off the bone, and medium rare.  As are all dishes at the Café it was accompanied by a green salad and French fries – there’s no additional charge for vegetables here – but again, apart from the salad and fries, none are offered!  One end of the Côte was a little sinewy, but for the most part very tender and worthy of its signature dish status.

For dessert I chose the rhubarb tart with ginger ice cream.  The tart was just right and the ice cream was sufficiently gingery to give it a nice kick.  My colleague went for the apricot sorbet which she described as absolutely delicious. 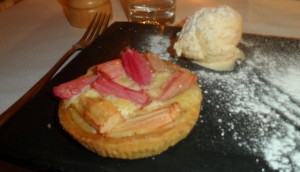 There is a reasonable size mostly French wine list which starts at £23.50 for house white or red, but also with a decent selection of wines by the glass including some more non-French options.  To the writer a good selection of wines by the glass has to be a good option given that dining companion(s) may be choosing dishes requiring totally different paired wine choices and may not want a full bottle for each course!

We are lucky in that plenty of restaurants in our area do offer decent cooking, as does the Café du Marché, but here the ambience is somewhat special which makes it one of my favourite area venues.  Despite the set menu cost coming at below some main course costs at some of the area’s other top restaurants, by the time one has added, a cocktail, wine and service charge (‘optional’ 12.5%), it certainly can’t be considered a low cost option except for the teetotal.  But here you are also paying for atmosphere and pedigree and it is thus great for a special occasion – or perhaps a business lunch on expenses.  As we said at the start, the fact that it has survived for so long is, in itself, a great recommendation in its own right.

Le Café du Marché is at Charterhouse Mews, 22 Charterhouse Square, London EC1M 6DX Tel: 020 7608 1609.  Web: www.cafedumarche.co.uk. It can be difficult to find if you don’t know where it is, but if you stand in front of the Malmaison Hotel, Charterhouse Mews is immediately to the left of the hotel building.