Casa do Frango: Memories of the Algarve

Casa do Frango: Memories of the Algarve

Around 30 years ago (how time flies) I have fond memories of a very pleasant summer holiday based at Carvoeiro on Portugal’s Algarve, but I only have retained two food memories thereof – magnificent, and enormous,  freshly caught sardines cooked and eaten on the dockside at Portimão and piri piri chicken from close by where we were staying.  The sardines were easily the best I have ever tasted and the piri piri chicken I had been unable to match – until now at the Shoreditch branch of Casa do Frango, which opened in December. 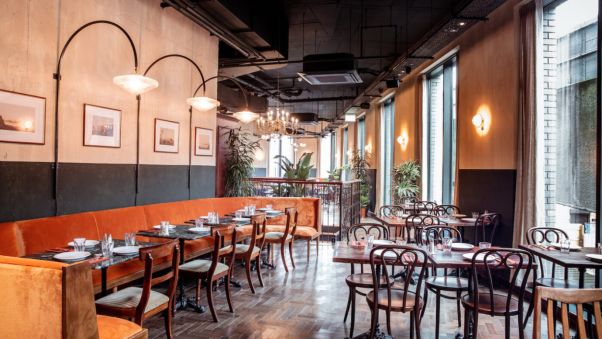 The light and airy restaurant on the first floor

The Shoreditch Casa do Frango (House of Chicken) is the second one to carry that name – the first is in Borough near London Bridge and was voted website Hot-Dinners.com’s readers’ favourite new restaurant of 2018.  The new larger restaurant may well be equally popular with visitors – it was certainly pretty well full on the Tuesday evening we were there despite only having been open for a couple of months.  Reviews by diners on TripAdvisor are 100% 5 star so far with top ratings for all of food, value and service!  Given how busy the restaurant was one cannot praise the service enough.

Casa do Frango specialises in Algarvian food with a selection of petiscos (Portuguese tapas) as appetisers (or small plates – you can make a meal of these on their own) and little in the way of mains apart from the superb piri piri chicken which took me right back to that Algarve holiday.  The restaurant is located between Great Eastern Street and Shoreditch High Street and its bright and airy dining room on the first floor is flooded with natural light from floor-to-ceiling windows during daylight hours. The ground floor houses a petiscos bar and the restaurant’s very own pastelaria (bakery).  The small wine list is an all-Portuguese affair and that country produces some excellent wines as well as port, of course, and some great brandies. There is also a selection of Madeira fortified wines (somewhat similar to sherries) from that Portuguese island off the African coast. 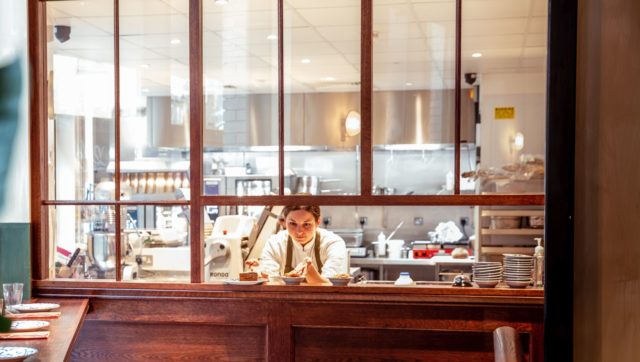 Casa do Frango has an open kitchen.

The chicken main course (half a chicken with spicy piri piri sauce on the side) at £10 is both great value and exceptionally moist and tasty, but the temptation for complementary sides like patatas fritas (£4) or the excellent African rice (£6) – or a selection of petiscos varying from £4-9 a portion can up the overall cost.  And you need to make room for dessert with the great restaurant-prepared pastel natas (£4). Almond or fig cake (£5), rice pudding (£5) – all coming highly recommended – not to mention the enticing cocktails on offer, can easily bump up the price.  But overall still great value for a lunch or evening out. The restaurant won’t get a Michelin star, but it’s not designed to and for a casual dining evening out with food that really stimulates the taste buds and a lively atmosphere, it is difficult to match.

There is an interesting selection of house cocktails available – some port based, but I suspect one could order any cocktail known by the barman if required.  We both tried the Caipirão (Licor Beirão, fresh lime juice, crushed ice} -somewhat  similar to the Brazilian Caiparinho.  Good taste at £8 but perhaps a bit heavy on the crushed ice. 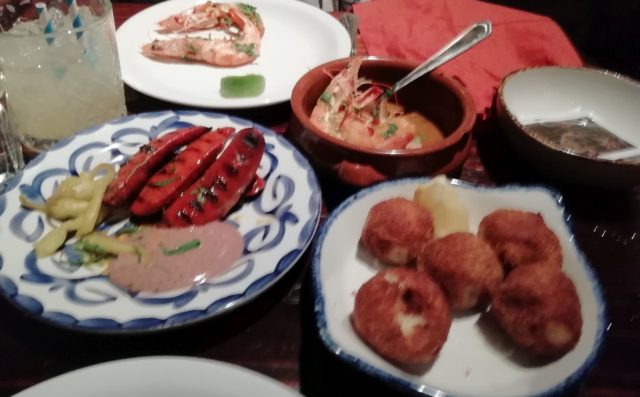 We started with a shared selection of petiscos and tried the piri piri shrimps drenched in garlic, bacalhau (salted cod) fritters and grilled chorizo all of which were superb and made us keen to try some of the other options on our next visit, but in order to leave room for the main event – the piri piri chicken – we restricted ourselves to these alone as appetisers.  Of these we would like to emphasise how good the bacalhau fritters were- perhaps battered fish cakes might have been a better description.  I’d always tended to give bacalhau a miss in Spain, Portugal and Madeira where it is commonplace.  But then the garlic prawns (very plump, tasty and moist) and chorizo were equally enticing making me definitely a petiscos fan from now on. 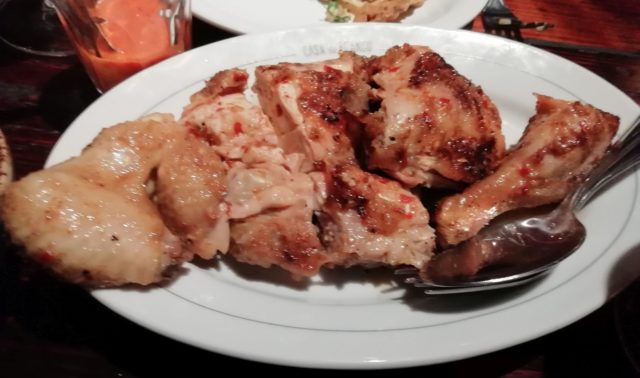 A half chicken (£10) – piri piri sauce on the side.  Adequate for 2 people having already partaken of some petisco dishes

But then for the piéce de resistance – the half chicken with piri piri sauce – which was plenty enough to share.  For those who may not be keen on spicy food, the chicken is also available with oregano or lemon and garlic instead.   And the piri piri sauce is served on the side anyway.

As a World War 2 baby I remember the time when chicken was a luxury item on the menu  – nowadays it is at the lower priced end of the meat spectrum- but  Casa do Frango’s succulent and tasty chicken certainly reminds one how good cooked chicken can be with or without the piri piri sauce.  We accompanied ours with the flavoursome African rice with crispy chicken skin, chorizo and mixed vegetables which would have made an excellent course on its own 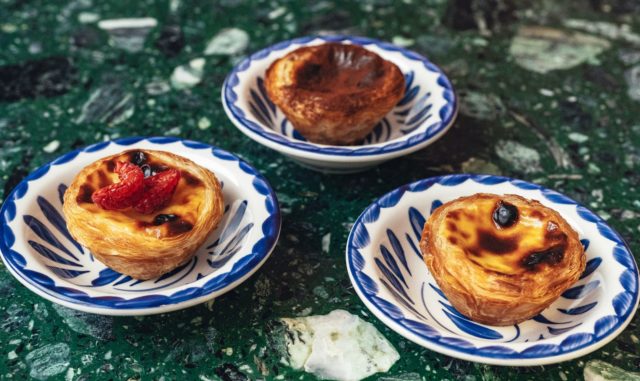 There are 3 flavours of pastels de nata available for dessert – raspbertry, cinnamon or original (l to r} each at £4

For dessert I chose the standard pastel (de) nata – the pastry case overflowing with an absolutely delicious vanilla flavoured egg custard.  I had recently returned from a holiday in Madeira where we had these as an almost daily staple but the Casa do Frango version was even more delicious.

We accompanied our meal with glasses of  an excellent full-bodied Portuguese red wine – the organic Aldano at £9 for a large glass.  The restaurant has a good selection of Port wine, but we passed on that and my colleague had a capuccino to complete her meal..  Coffee has improved no end in UK restaurants in recent years and this was ne exception’

All in all an extremely pleasant evening about 15 minutes walk from the eastern end of the Barbican.  The atmosphere was busy and lively with music playing the whole time, but not so loud one couldn’t carry on a conversation.  Recommended