In 1972, Frenchman Raymond Blanc moved to England, finding work as a waiter at the Rose Revived restaurant in Oxfordshire. When one day he was forced into the kitchen by a chef taken ill, Blanc’s career suddenly changed direction. Since then, the self-trained chef has earned himself Michelin stars, opened his own restaurants, and established The Raymond Blanc Cookery School. Now the chef explains just how this came to be, and what British food means to him. 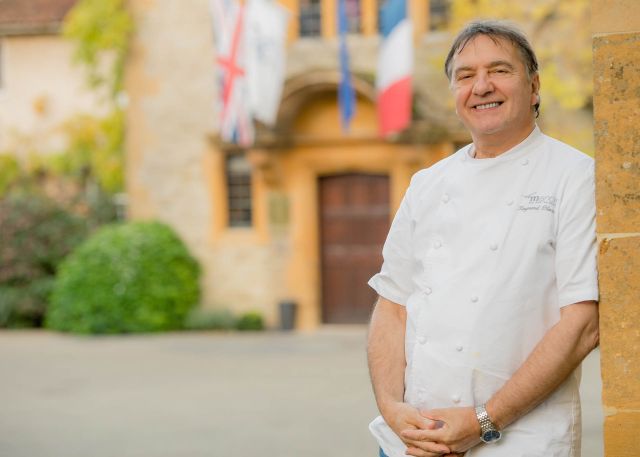 Q: What was British food like when you first moved to the UK?

Thirty years ago, England was a very different place. Food was class-led and luxury was exclusive. The British separated food from everything. It had become a mere commodity, which was produced intensively, heavily processed, heavily branded and marketed. For the majority, food was devalued, it was a fuel to feed the body and the cheaper the better.

There’s a quiet revolution going on. People are starting to understand again that food connects with everything – with your environment, society, farm, home, family values, the health of the nation. It is truly exciting to see people start to respect food, enjoy food and give it value.

Q: As a self-taught chef, was food and cooking always a passion?

I became a chef at the age of twenty-seven. I had never worked in a professional kitchen – just a few months in a pub. At the beginning, I was never great company when it came to eating with friends.  In fact, in the early days – all the time, my mind was constantly preoccupied with ideas for recipes, or preoccupied by the scents and tastes of ingredients.

Q: Did this lack of training work to an advantage?

As I was untrained I had so much to catch up with and a whole world of food to discover. How could I do that dish? What if I did this to that? I was obsessed – in trying to conquer and catch up as well as to go further and discover new tastes and experiences when it came to cooking and eating. Sometimes it was hard work and sometimes the ideas just came out of the blue – I think that combination is important.

Q: What is it that makes your restaurant Belmond Le Manoir aux Quat’Saisons so special?

Belmond Le Manoir aux Quat’Saisons is the most dynamic, creative place and the people who work here have ownership. Yes, it is my vision, but I work very hard for them to own it as much as I do – emotionally, aesthetically, intellectually, and business-wise.

I try to teach young people to open up to new ideas and be curious. I want them to ask thousands of questions. Everything is based on knowledge – our people are trained to know anything you may ask them. They have to understand the vision, share it, own it and pass it on.

Q: Is there a consistent theme to what you are trying to achieve in a ‘Raymond Blanc’ restaurant?

When I was creating Belmond Le Manoir, it was and still is a labour of love. My vision was actually to create a place with republican values. I come from a working class background and I wanted it to have an inclusive luxury. The first thing I did was to kill table protocol.

Q: What did that involve?

I told the young commis to engage with the guests, then I started to remove jackets and ties – people were dressed up to the hilt and I did not want them to be uncomfortable. We were the first to have a full a la carte menu for vegetarian and vegan guests. We also actively welcomed children. You have no idea what a battle that was..!

Q: What makes a ‘restaurant’?

A restaurant used to be an appendage with no connections. Now a restaurant is part of society as important as any university, museum or cinema. It brings people together. Because we have so little time for family life, restaurants will increasingly become a way to enjoy time together and celebrate. All this is the basis of our success and it has had huge commercial consequences.   So, the look and feel of Le Manoir – is welcoming and inclusive in all ways.