Chez Mal – Nice food, but timing could have been better

Chez Mal – Nice food, but timing could have been better

The Malmaison restaurant in the past has attracted a fair amount of both praise and criticism but my own experiences there have invariably been good in terms of well-cooked and well-presented food, accompanied by decent service.  In terms of mid-price hotel restaurants, the Malmaison group was one of the forerunners in uprating the standard of cuisine available to hotel guests and other diners – the five star establishments have always had correspondingly high class eateries, but often with excessively high prices, while there used to be a huge variability in offerings from the next tier down where the Malmaison’s restaurants would seem to be a good example of the better end of the offerings.

On this occasion probably our timing could almost certainly have been better.  We coincided with a couple of large groups eating dinner – probably hotel guests staying there for a business event.  One comprised a table of 16, while there were several other smaller groups, but all descending on the restaurant at about the same time we arrived, and the service suffered accordingly, particularly as there seemed to be, at the start at least, only two or three wait staff to handle the influx.

We were initially seated adjacent to the biggest group of diners which seemed a strange choice given there was plenty of space elsewhere which would have been far less noisy.  We thus requested a move and were given a much quieter table, although initially the background music was excessively loud which could have impacted adversely on the occasion. But thankfully this was turned down to a more comfortable level.  But why a restaurant like Chez Mal needs loud background pop-type music defeats me.  For me it detracts from the overall atmosphere which could otherwise have been really good.

While the service we received was friendly enough it was quite slow and when we were waited on it seemed a little rushed and erratic.  Sounds like a contradiction but not if one analyses it and was almost certainly related to the demands on staff of the bigger parties. Even with them the restaurant was probably only half full.  Re. service, we weren’t offered bread, for example, at the start of the meal, which was a shame as when we eventually asked for it the bread we received was excellent.  Good bread is often, in my experience, the forerunner of good food and on this occasion we certainly didn’t have complaints about the quality of the food which was generally very good.

The restaurant has a modern decor and with decent size smoked glass tables and plenty of banquette type seating allows for decent privacy between tables.  The furnishings are mostly black throughout which does make things a little dark though.

Chez Mal describes itself as a cross between a bistro/brasserie type restaurant serving seasonal food and a grill where its steak offerings in particular are generally very good indeed.  I’ve had steaks there before and very good they were and by all accounts the Mal’s hamburgers are great too.  But on this occasion we decided to go with the good value set menu – available for lunch and dinner (£19.95 for two courses or £24.95 for three) – which offered a decent choice, and one dish substituted off the a la carte given my colleague and I have similar tastes and we wished to seek some additional variation for the review.  Under normal circumstances the set menu would have been fine.  Since our visit the set menu has had a seasonal change so the dishes we had off it are no longer available. 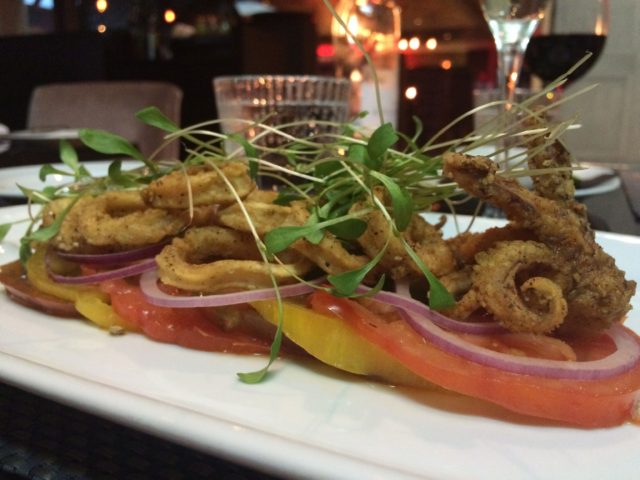 Thus we both started with somewhat similar dishes.  One off the set menu and one from the a la carte.  The set menu starter was salt and pepper squid – very nicely served and tasted very good too as were the heritage tomatoes on which it was served, while the a la carte one was a tempura of calamari and prawns (£9.50) – again beautifully served, very tender almost melt in the mouth calamari plus prawns.  A good sized and very tasty starter. 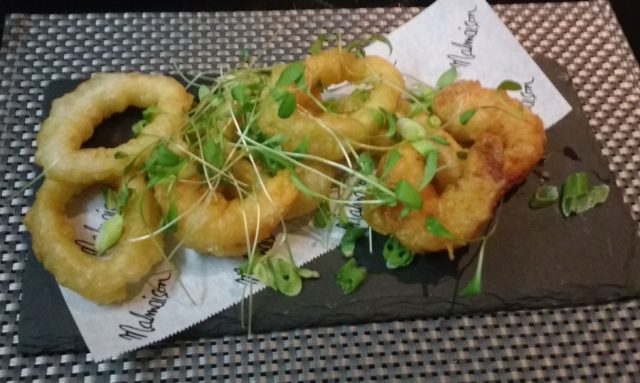 Tempura of calamari and prawns

For mains we both chose dishes off the set menu.  My colleague went for sea trout on a bed of vegetables which she described as excellent while I had diced shoulder of lamb which was also very good.  It didn’t look anything special but lamb shoulder tends to be one of the most flavoursome cuts and that did come through in the dish. It came with a good selection of nicely cooked vegetables too. 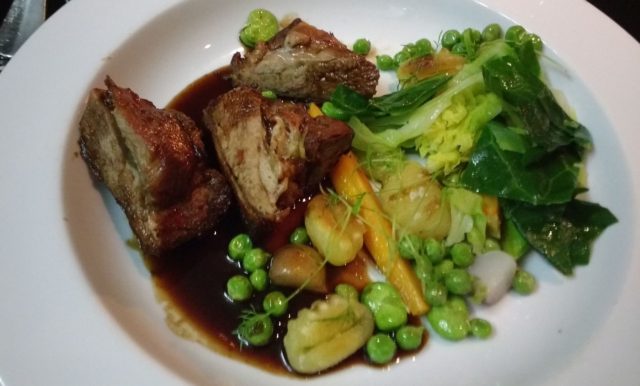 Shoulder of lamb main course from the set menu

There is an extensive grill menu – indeed the restaurant describes itself as a steakhouse as well as a French style brasserie.  New York strip steaks are available by weight ranging in price from £27 for a 25o gram piece of meat up to £55 for a massive 550 gram option.  The bargain here would seem to be a Chateaubriand for two people at £50 with a glass of Malbec each, but this appears only to be available for orders before 7.30 pm. 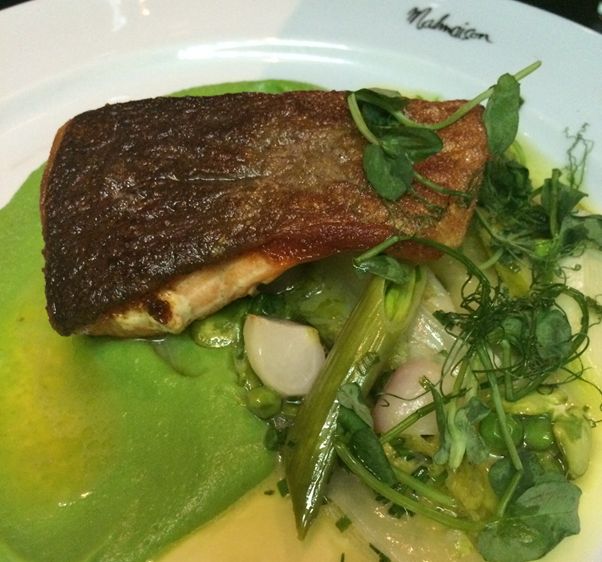 To end I went for the cheese board off the set menu – pleasantly surprised that it didn’t carry an additional price which the cheese option so often does.  The portions of cheese were small but adequate and the cheese quality was very good.  My colleague decided on a cassis sorbet which she described as extremely nice.

There is a reasonable wine selection varying from £20-£45 a bottle, but quite a few are available by the glass.  I went for a South African pinotage at £6.50 a glass – not great –  but my colleague very much enjoyed a glass of Chablis at £9.

So overall something of a mixed experience – excellent food, very reasonable price for the set menu, but indifferent service (but as noted earlier our timing wasn’t great in this respect) particularly at the start, but did improve later with more wait staff seeming to be on duty.  The restaurant was well appointed and seating comfortable.  Background music was over-loud to start to the extent that it was oppressive, but it was turned down to a better level fairly quickly.

Checking on reviews from other diners on many of the websites which publish them, they were variable, but overall positive with some good comments on the grills on the menu in particular.  Service didn’t seem to be too much of an issue so on balance – we were probably just unlucky in that respect – so I would still recommend Chez Mal for a pleasant lunch or an evening out in nice surroundings with comfortable seating and decent sized tables.

By all accounts too the Sunday lunch seems to be particularly well received and could be one of the best of such options available in the area.  It is available at £19.95 a head – £9.95 for children.  It comprises soup of the day and/or unlimited appetizers from the chef’s salad table, either brunch or main dishes including roast prime rib of beef or roast chicken as options for those for whom Sunday lunch isn’t Sunday lunch without a roast, and then a selection of desserts.

Chez Mal is in the Malmaison hotel, 18-21 Charterhouse Square, London EC1M 6AH.  Tel: 0844 693 0656.  More details of the restaurant and its latest seasonal menus can be found at:  www.malmaison.com/locations/london/chez-mal/