Barbican residents are pretty well served with places to eat across the price spectrum without even having to leave the complex.  There are three licensed restaurants within the Arts Complex itself which all do particularly well, when there are performances on in the theatre and concert hall, but which deserve better at other times given the generally high quality of the food and the facilities on offer. 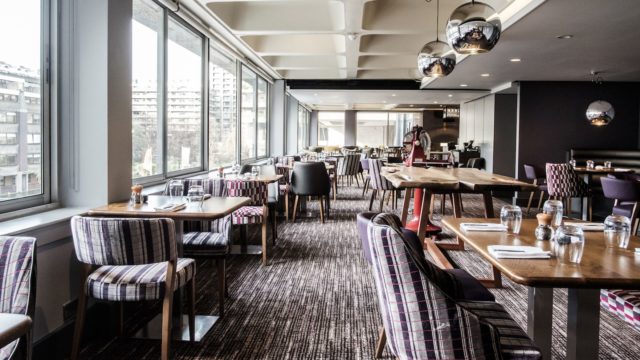 Pride of place among these is Osteria on Level 2 (the library level), which is the complex’s flagship restaurant run by Searcy’s, a group which offers high quality private catering services at other Barbican specialist venues like the Conservatory.  It used to be Searcy’s flagship London restaurant, but has probably been overtaken in this respect by the facilities at the top of the Gherkin, but still provides high quality eating in attractive surroundings throughout the year.  It tends to be particularly well supported at lunchtimes and in the evenings when there are big performances in the Arts Centre, but can be quiet when the concert hall and theatre are dark and may even close early on those evenings.  One does need to check.

We went to eat at the restaurant on one of the supposed quiet evenings and were advised to come early as a consequence, so we booked for 5.45 pm on  being told the restaurant might close as early as 7.30 pm.  In the event we could have eaten much later as the restaurant and bar were busy with one group of nine persons only being seated at around 7.35 and when we left the restaurant at around 7.50 quite a few tables were occupied and there were a few more drinking in the comfortable bar/lounge area. 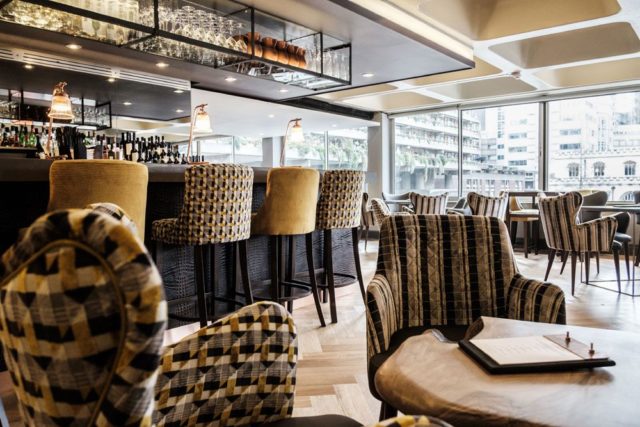 Osteria describes itself as a modern Italian restaurant, with spectacular views of the Barbican Lakeside and fountains. We were there on a very pleasant May evening, were shown to a window table and can confirm the pleasant outlook across to St, Giles Church.  Osteria also notes that it was selected as one of the top 10 Italian restaurants in London by bookatable.com a couple of years ago, which gives you an idea of food quality to expect.

In the evenings when there are theatre or concert performances, a pre-theatre menu is available at £18 for one course, £23.50 for two courses or £27.50 for three. Served exclusively between 5–7pm, it has been specially created to offer the widest choice and ensure prompt service, so you can enjoy a relaxing pre-performance meal.

In the Aperitivi bar, the cocktail list showcases traditional Italian offerings with a twist, including seven variations of Negroni, Bellini and their signature aperitivo, the ‘Mezzoemezzo’. The wine list includes famous Barolos, Supertuscans, and indigenous grape varieties by new generation winemakers from Puglia, Sicily and Sardinia.

The à la carte menu though is rather limited in choice and seems to be somewhat focused on vegetarian and vegan eating options which, with a limited choice of only four mains and four starters means that for the non-veggie there isn’t a lot to choose from.  This is probably in the interests of speedy service for the pre-theatre crowd.  Most of the à la carte offerings are also available on the pre-theatre menu, but not the pasta dishes. 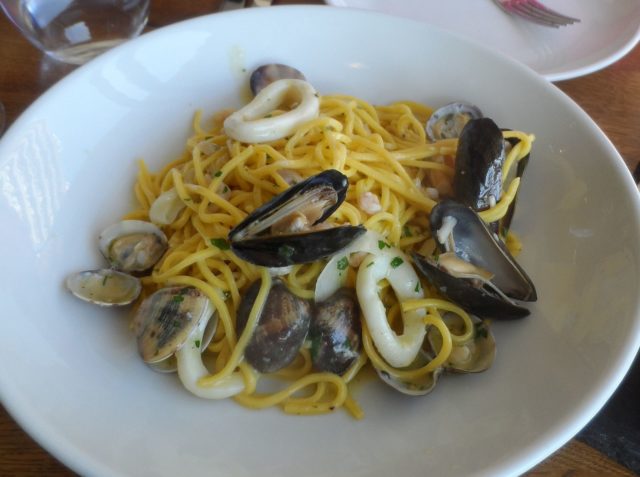 With the limited choice of starters and we found nothing that appealed and given there wasn’t a starter-sized option on the three pasta dishes offered we decided to share the seafood linguine (£17.50) as our starter.  It was heavy on shellfish (mussels, cockles, clams and small prawns) and cooked in a very tasty garlic butter sauce.  Recommended as long as one is OK with shellfish in the shells.

There was a choice of four mains two of which were vegan options, one fish (salmon – £18.50) and one meat (beef brisket – £23).  As neither my dining partner and I are that keen on vegetarian or vegan cooking we went for the salmon and the beef with two additional sides – zucchini fries and roast heritage potatoes – both £4.50.  There were also the three main course pasta option on the a la carte menu. 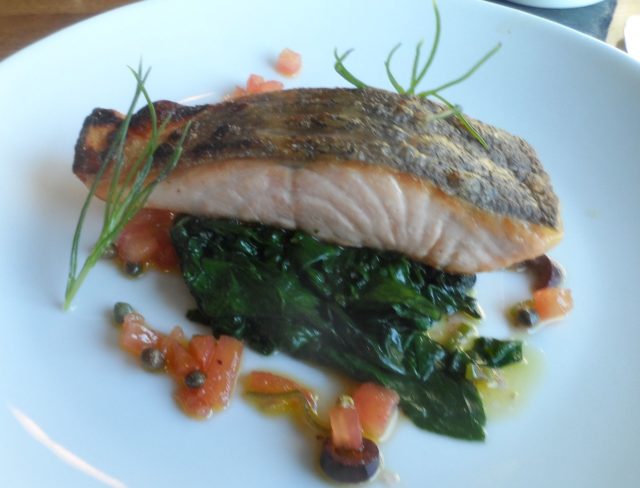 The salmon was served on a bed of sautéed spinach.  It was cooked well with a nicely crisped skin and very tasty.

The beef brisket with pearl barley, roast turnips and mustard jus was an enormous serving – probably too much for one person.  It was presumably slow cooked so it was extremely tender and again was a great dish, but nothing that special and not sure how authentically Italian it was! 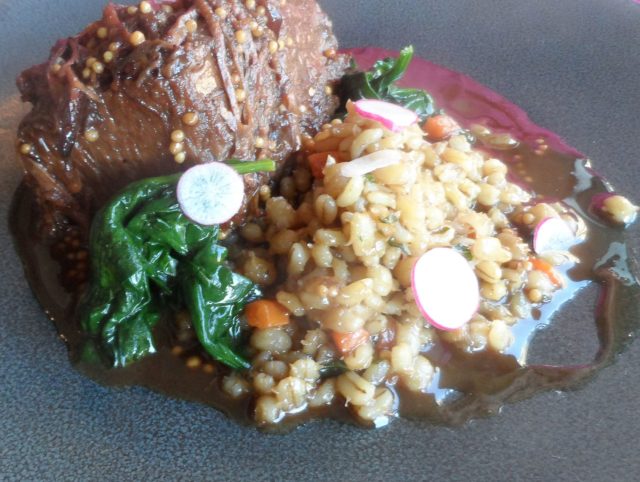 For desserts I chose the special aperitivi sorbets (£5.00) – bellini, Aperol spritz and prosecco – flavoured.  Something a little different in the sorbet line.  More standard ice creams and sorbets are also available at the same price.  My partner chose the pistachio filo cannoli with pear puree and stracciatella ice cream.  The latter was nice but the cannoli, although looking interesting, were underwhelming.

On the drinks and cocktails front there is plenty of choice and one can commence in the very pleasant lounge/bar area before being shown to one’s table.  We chose to go straight to our window table with the views though and we each had a glass of a very pleasant prosecco (£7.50) and with the meal chose a bottle of a Sicilian Pieno Sud – a good choice for a dryish white wine at £24.50 a bottle.

Service was excellent, seating was comfortable, the view from the table was good, food was nicely prepared and served and the ambience extremely pleasant – all recipes for a great dining experience and not a too costly one by area restaurant standards, particularly for a venue offering such comfortable and pleasant surroundings.  But the limited choice of dishes was a shame, although if one is vegetarian or vegan the choice would have been better than at many other local restaurants.   I suppose it’s all in the interests of being able to serve up a rapid pre-theatre or pre-concert repast, but it would have been nice if perhaps there had been a little more choice on the à la carte menu, even if it takes a little more time to prepare.

The menu focuses on simple and generous Italian cooking, with an emphasis on produce and seasonality, paired with reinvented Italian cocktails and regional wines. The popular lunch menu is available between 12–2.30pm, and offers regularly changing dishes at £15 for one course, £17.50 for two courses and £21.50 for three courses, making it an ideal lunch destination at an affordable price offering comfortable seating and a nice ambience and the very pleasant views.  Seating at one of the window tables is recommended.

For a Barbican resident the sheer convenience, well-prepared food, exemplary service and pleasant surroundings and views outweigh any perceived shortcomings and the restaurant probably deserves an even better take-up than it already achieves.