Christopher Makin reflects on how Barbican residents are consulted

An 18th birthday is always worth celebrating, so join me in toasting the coming of age of the Barbican residents’ forum that is consulted by the City of London, our Landlord and Managing Agent. That forum is the snappily named Barbican Estate Residents Consultation Committee, known colloquially as the RCC, which I have Chaired since 2018.

Long-standing residents will recall the relationship with the Barbican Estate Office (BEO) before the RCC.

“I moved here as a tenant in 1969 and the BEO was slow to recognise that communications with residents needed to change after we purchased the leasehold of our flats,” said Professor Stuart Morganstein, a Barbican resident for 52 years. “Our Common Councillors did, however, set up an informal consultation group that met in the El Vino wine bar two or three times a year. This led to some improvements, for instance by reducing the gap between works being approved and charged to our service charges.”

Consultation took a step forward with the creation of House Groups in the 1990s despite concerns, thankfully unrealised, that this might pit one house against another. Then, in 2003, consultation took the form of a vote on the future management of the Estate.

“Lynne Brooke, John Bailey and I were the three Bs behind this referendum,” said David Bradshaw, Deputy and Common Councillor for Cripplegate Ward. “We wanted to continue with the BEO team and form a resident body that would determine what was required of the BEO, as opposed to residents responding to BEO initiatives/programmes.”

There was a good turnout for the 2003 vote with 63 percent of Barbican residents voting, of which 71 precent opted for decision-making being left with the City. A key factor here was the City’s promise to create the RCC as a formal route for Barbican residents to have a greater voice in managing the Estate.

The 2003 promise for a consultation committee was not top of mind for Lord Lisvane when he carried out a recent review of City of London governance that queries the future of numerous committees. This is why I have been working with the Chair of the Barbican Association (which represents residents in all non-service charge issues) to remind the City of their promise. We want to see a more effective RCC that can influence what happens on the Estate, how residents’ money is spent, and have a say in the future of the Estate.

Each RCC meeting reviews the papers for the next Barbican Residential Committee (BRC) that makes the decisions on the management of the Estate, and Officers from the City of London attend the RCC to brief its members and take their questions. The RCC’s Minutes provide the BRC with residential input into their decisions in addition to the Common Councillors from Aldersgate and Cripplegate who are BRC Members, but cannot always vote.

All residents are welcome to come and observe the RCC’s meetings where they are represented by a member of their House Group. During the pandemic we are meeting online and details can be found on the City of London’s website.

Last but not least, the RCC has five teams tackling underfloor heating, major works, gardens, service levels and service charges. During 2021 Barbican residents will be offered the chance to volunteer to join these teams. I hope you will volunteer to contribute your knowledge and enthusiasm to help make our amazing Estate an ever-better place to live. 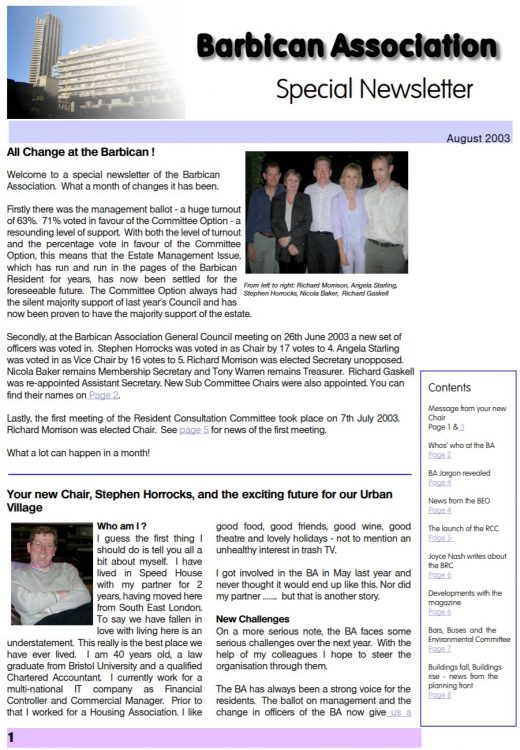 The BA newsletter from after the 2003 vote. 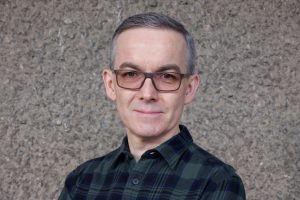 Christopher Makin reflects on how Barbican residents are consulted – from the March 2021 issue of Barbican Life magazine.