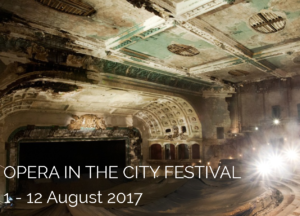 COMPETITION – 2 x 2 TICKETS FOR A PERFORMANCE OF YOUR CHOICE AT ‘OPERA IN THE CITY FESTIVAL’ FROM 1st – 12th AUGUST 2017 AT BRIDEWELL THEATRE.

Time Zone Theatre shows new productions of Alexander Zemlinsky’s A FLORENTINE TRAGEDY and Pietro Mascagni’s ZANETTO. Together with the touring opera production MOZART & SALIERI by Nikolai Rimsky-Korsakov, these will form their ‘Fin de Siècle’ series of works composed around 1900.

New and experimental works include EVEN YOU, LIGHTS, CANNOT HEAR ME by award-winning composer Simone Spagnolo, and NERO MONOLOGUES by Sarah Toth, which combine different art forms and push the boundaries of classical music.

Andrew Bain will bring his acclaimed one-man show LANZA about the life of 1950’s opera singer Mario Lanza to the first Opera in the City Festival this summer.

To enter, simply share/comment and email info@timezonetheatre.com by 1st July, stating the date and production you would like to attend. The winners will be informed shortly afterwards.