‘Conflict Kitchen London’ launches on 11th September. Conflict Kitchen London: Burma is the first in a three-week food series and part of the Talking Peace Festival, a month-long series of events hosted by International Alert to celebrate peace and the power of words in resolving conflicts.

London’s first ever Conflict Kitchen aims to showcase how food can unite and inform, and provoke discussions in light of upcoming International Day of Peace on Sunday September 21st 2014. 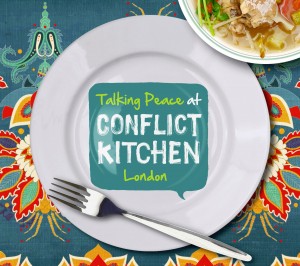 Burmese born chef Debbie Riehl will lead the kitchen in the first week of the residency from 11th to 13th September, serving food from the region and encouraging all diners to strike up conversations and discover something new about conflict and the prospects for peace in the country. Held at Monikers restaurant in Hoxton Square, Conflict Kitchen London: Burma will be only the second Burmese restaurant in all of Europe.

“Food is a powerful metaphor for peace. Like art or music, it’s a universal language that brings people together. Indeed, the practice of ‘breaking bread’ is a tradition as old as society itself,” says Phil Champain, Director of Emerging Programmes at International Alert.

International Alert will also take Conflict Kitchen London to the Queen of Hoxton on 20th and 21st September for a rooftop grill. Delicious Middle Eastern food and cocktails will be served to spark conversation about the on-going conflicts in the region, with the menu consisting of recipes donated by top chefs Yotam Ottolenghi, Anissa Helou and Claudia Roden.

The project is in partnership with Grub Club, Monikers Restaurant and supported by Queen of Hoxton.