On a recent walk through the city, I made an impromptu visit to Fortune Park. A recent discovery for me, I have fallen a little bit in love with this pocket-sized green space in the heart of London. I discovered it by accident. On a visit to the Barbican Centre, I was walking along Whitecross Street when I saw something that I hadn’t noticed before. Halfway along the row of shops and offices on the other side of the street, there was the mouth of a passageway. Curious about where it led, I crossed over and ventured in. Walking along it, I felt the press of walls on either side, the weight of lives being lived in the rooms stacked above me, then I stepped out again into space and light. People sat at picnic tables, chatting and drinking hot drinks. At the edge of the children’s play area, a tall tree balanced a pale sky on its upper branches. Outside of the little cabin selling hot drinks, the aroma of coffee mingled with the sound of 6music. Fortune Park worked its charm on me and, over the coming months, I found myself making the trip from my home in Walthamstow as often as I could. On the day of this particular visit, the season was taking a distinct turn towards autumn. There was a sharp chill in the air. A sweetgum tree which stood at one corner of a grassy area blushed a deep red. Walking past it on my way to a bench, I noticed that the ground directly beneath the tree was completely bare as if its shadow had burned the grass away. 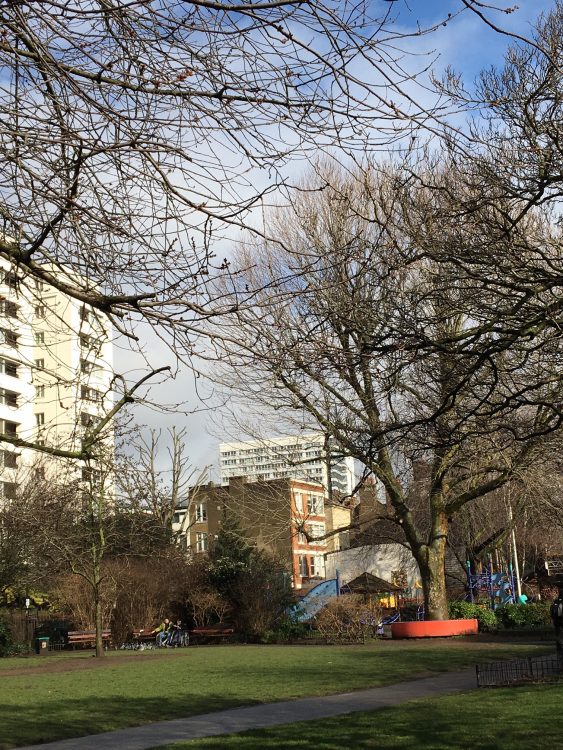 Sitting on the bench tucking into an apple, I watched a crow taking off from the roof of a block of flats. The crow flew diagonally up until he was just clear of the edge of the roof and then curved over into a downwards glide. He swooped towards the street below, pulling away from the building as he fell so that the line of his flight described an elegant curve. It was a compelling thing, this small moment of drama happening just outside the boundary of the park, compelling in its quietness, in the speed and the certainty of the crow’s flight. 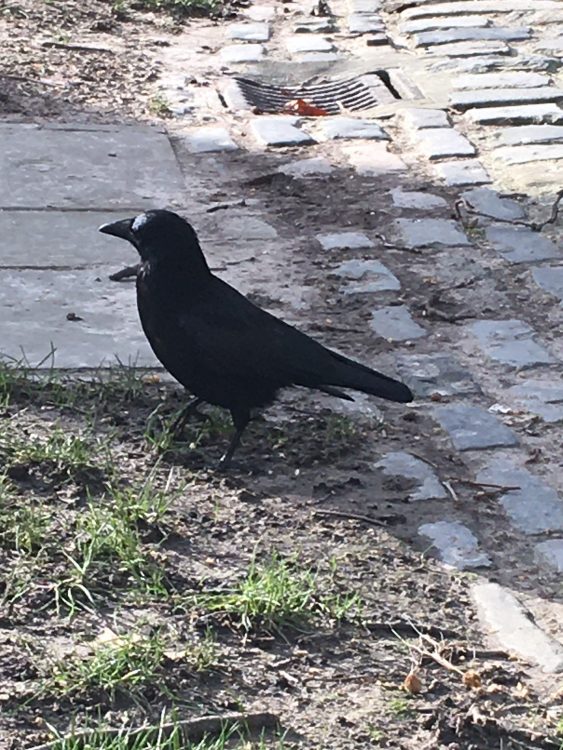 Earlier that week, I am walking to work on a blustery morning when a group of them catch my eye. A raggedy murder of crows is flying around the top of a recently-built tower block. They are scraps of a pirate flag, shredded and tossed about by the wind. I stop to watch them for a moment. They push out into the sky, the roof of the tower at their backs. From here they could fly along the railway track as it arrows north towards Walthamstow Central and Wood Street beyond. Or they could fling their shadows across Selborne Way and over the multi-storey carpark with its corkscrewing access ramp. And yet none of them seem to be making any headway. Even as they push out into the sky, they are just as soon circling back again. The tower reels them in as if it has them under a spell.

No such fate for the Fortune Park crow. He sprang up from the roof of the block of flats and the next second he was gone, dipping behind a row of trees and disappearing from view. What he did next I can’t say. Maybe he settled on a branch or maybe he flapped darkly up Golden Lane. I looked back up at the rooftop. It was empty again. He might never have been there. 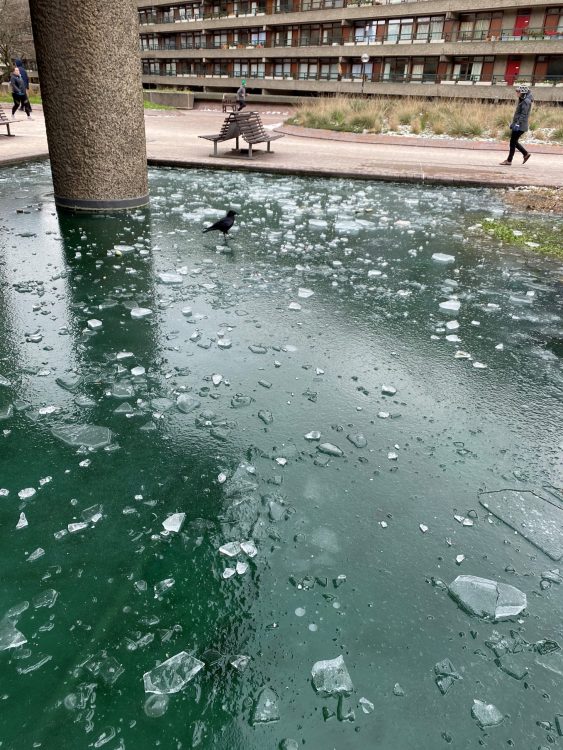 Thanks to Fred Rogers and Matteo Hegarty for the photos.

More of Ben’s musings at benwritesanddraws.com.