This Autumn, one of London’s premier restaurant groups, D&D London, will celebrate its 10 year anniversary. On Wednesday 5th October, ten D&D restaurants will welcome diners for a special, celebratory three-course lunch or dinner, priced at just £10. This is a gesture from D&D to thank its millions of customers for their support over the last decade.

For one day only, a £10 menu will be available at flagship D&D restaurants: Le Pont de la Tour, Quaglino’s, Bluebird, Orrery, Skylon, Sartoria, German Gymnasium, Plateau, Coq d’Argent and Butlers Wharf Chop House.  Coq d’Argent is in reasonably close walking distance of the Barbican at the eastern end of Cheapside – and is one of the Barbican Life editor’s favourites in the area as is another group restaurant, Angler, at the South Place Hotel half way between Moorgate and Liverpool Street stations.  To read Reviews of these two restaurants click on Coq d’Argent – Great dining in the heart of the City and Angler  – A Terrace for All Seasons 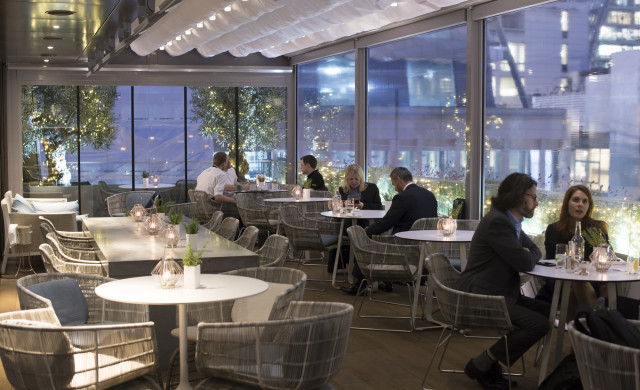 In addition to the celebratory £10 menu, a series of special events is planned throughout the autumn. First up, South Place Hotel will be hosting an exclusive evening of music and visual arts on  Friday 23rd September. British dance music legends Groove Armada will perform an intimate set, complemented with visuals from artist Gavin Mitchell, which will be projected onto the walls of the hotel’s Secret Garden. All proceeds will be donated to the Teenage Cancer Trust.

On Wednesday 26th October, three D&D star chefs will be joining forces for a spectacular collaborative dinner at Blueprint Café in aid of child adoption charity Coram. Angler’s Gary Foulkes will be preparing the starter, Le Pont de la Tour’s Frederick Forster will mastermind the main course and Sartoria’s Francesco Mazzei is on dessert duty. And to round off the month at Quaglino’s, platinum-selling American R&B and dance music legend Jocelyn Brown will be performing to an invited audience on Thursday 27th October.

In September 2006, Des Gunewardena and David Loewi (the eponymous D and D) led the buyout of Conran Restaurants and founded D&D London, which has since evolved into a diverse collection of 34 restaurants, located in major cities across the world and employing over 2,000 employees. Over the last 10 years, many remarkable chefs have honed their skills working with D&D.  Current culinary stars include Francesco Mazzei, Gary Foulkes, and Frederick Forster and Jeremy Lee, John Torode, Robin Gill and Allan Pickett are just a few of D&D’s star chef alumni.  Countless waiters, sommeliers, maître d’s and other back of house staff have also cut their teeth as part of the D&D family and have achieved significant position in the London restaurant scene.

Chairman and CEO of D&D London, Des Gunewardena reflects upon the anniversary: “People have said that the last decade has been a golden age for London restaurants and I think they are right. D&D London has restaurants in Paris, New York and Tokyo, but for me there is no doubt that London leads the pack – not only at the top end of the market, but also in casual dining, street food, gastro pubs and so on. To my mind it’s like the Premier League in football.  Restaurateurs and chefs from the US, Europe, Far East, as well as Londoners, all want to be part of it and so are driving quality and innovation. We’ve had a great first 10 years as D&D and look forward to firmly remaining part of the most exciting restaurant scene in the world in the next 10.”