D&D London has announced that it has signed an agreement with Generali Real Estate to launch a 9,257 sq ft restaurant on the 14th floor of new development, 120 Fenchurch Street. 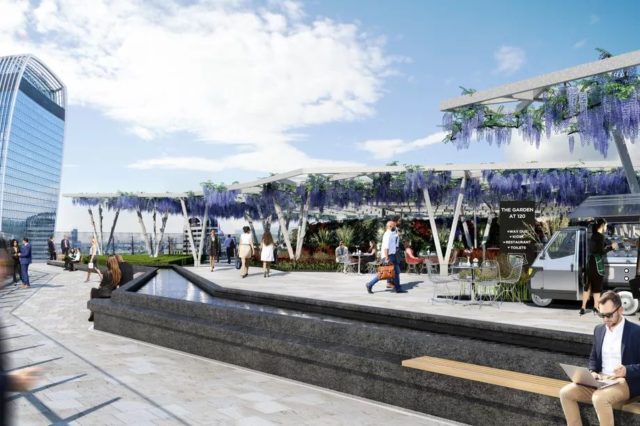 D&D, which took over the Conran restaurants in 2006, is one of the top rated  restaurant chains in the country with nearly all its restaurants serving exceptional quality food.  It owns and operates over 30 leading restaurants in London, Leeds, Manchester, Paris, New York and Tokyo and also the highly acclaimed South Place Hotel in the City of London with its Michelin-starred Angler restaurant only a short walk from the Barbican.  Other restaurants in London include Le Pont de la Tour, Coq d’Argent, New Street Grill, Bluebird, German Gymnasium and Sartoria and several of these which are relatively close at hand, have been reviewed (all very favourably) in our pages over the past few years.

The new restaurant, which is set to open in Spring 2019 will operate on the floor below a public sky garden and will boast stunning views of the capital including the River Thames, Tower Bridge, Tower of London and The Shard.

The building, which is adjacent to Leadenhall Market, was designed by Eric Parry Architects and will in addition provide some 420,000 sq ft of new Grade A office accommodation over 13 storeys, and around 27,000 sq ft of retail space at ground level.

“After a series of regional UK openings, including our recently launched rooftop restaurant 20 Stories in Manchester, and the announcement of our international expansion with Bluebird opening in New York later this year, 120 Fenchurch Street represents a return to London for what will be our largest new venture here since Aster in Victoria. London continues to be a significant part of D&D’s growth strategy and the project also reflects our continuing commitment to the City. 120 Fenchurch is a remarkable building and I hope that we can create a restaurant to match.”