Camilla Davies caught up with Daniel Doherty, the chef at the helm of The City’s exciting Duck and Waffle restaurant on the 40th floor of the Heron Tower on Bishopsgate. With summer fast approaching, Daniel discusses fine dining and the pressures of big city culinary cuisine. 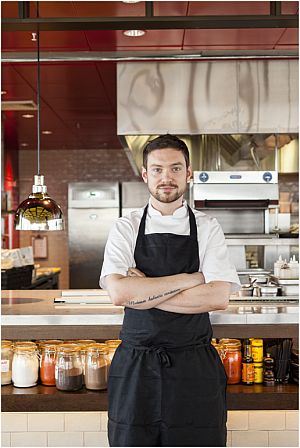 With the landscape of fine dining ever changing, Daniel Doherty believes that even that the expression itself should be examined. Rather, he’s in favour of a different culinary ethos.

“I’d like to see the notion ‘fine dining’ sort of disappear, so you’re creating forward thinking refined food but in a much more relaxed atmosphere,” he muses. And when it comes to his own restaurant, Duck and Waffle, Daniel refuses to be drawn into a black and white definition.

“Lots of people say, what are you?” The chef begins. “Are you British, are you Italian, are you whatever; we kind of create what we think is seasonal, creative food that people can enjoy and share whilst actively enjoying the view. I think from the start we didn’t want to be pigeon-holed.”

One thing this chef is intent on, however, is sourcing local ingredients, and supporting local businesses.

“British food has had a rough time in the last 50 odd years where we’ve taken the direction of big supermarkets, that kind of thing. My parents still remember the time when they had a butcher, a baker, a fishmonger and there’s an element of that that can still be bought back, I think restaurants do it then hopefully it encourages others to do it too.”

Deciding to train as a chef at age 16, and winning an elite scholarship to study at The Academy of Culinary Arts, Doherty has fast assured a name of repute within the industry. But being a professional chef is a tiring vocation – particularly when you’re at the helm of a restaurant open an astonishing 24 hours a day. Despite the pressurised work environment, Doherty still considers cooking at home one of the best of life’s pleasures.

“I fell in love with this industry because I love to cook, and to eat – not because I wanted to run a 24/7 restaurant with 45 chefs. There is nothing better than cooking a meal and just enjoying what you’ve produced. Even if you mess it up you realise what you need to do next time, you play around. I find cooking very relaxing, and doing it at home you know nobody is going to write about you, tweet about you, upload to Instagram, and judge you.”

The most wearing aspect of Duck and Waffle is the practicalities of being open all hours.

“At the beginning the senior team were having to cover a lot of strange shifts and weird sleeping patterns. Now we’ve found our feet and have systems in place with our teams, I think it’s more physical exhaustion from knowing that when you leave work at midnight, the restaurant is still open and you’re still going to serve up to 300 covers, and there’ll a lot industry people, a lot of other chefs judging you when you are supposedly sleeping. When you wake up in the morning you’ve got that stress of ‘Oh god, what happened last night!?’ – but we’re doing alright.”

He may be a famous chef, but his own food heaven is very down to earth.

When we ask the chef his legacy meal -“I’d like to be known for more than a bloody plate of food!” – he opts for his conversation starter signature dish.

“I suppose I have to say the Ox Cheek Doughnut, it was nice to have a dish that wasn’t unanimously loved by everyone. There’s something cool in that food is subjective; you soon realise that not everyone’s going to love it!”

Views from the Duck and Waffle- the highest restaurant in London

With the restaurant situated on the 40th floor of London’s Heron Tower, look out for Daniel at table number 63 … “It’s basically a really nice booth in the corner of the restaurant that overlooks Canary Wharf, Tower Bridge, the Gherkin, all those iconic buildings.” He says, proudly. Away from the workplace, the chef will be exhibiting his al fresco skills at June’s Taste of London foodie festival. With the 5 day event hosting culinary master classes and Laurent-Perrier champagne tasting sessions, if Ox cheek doesn’t spark your fancy then there’ll be plenty to suit any palette.

Daniel Doherty was at Taste of London, claimed to be ‘the world’s greatest restaurant festival’ in June at Regent’s Park. For more information on the event go to www.london.tastefestivals.com