Divine Proportions is a new dining experience which runs from September 14th to January 12th at the Vaults in Waterloo, based on the story of Dionysus, God of Pleasure and Mischief. Blurring the lines between feast and fantasy, Shotgun Carousel presents an immersive party experience hosted by some of your favourite deities: ‘Five course banquet meets outrageous camp cabaret meets all night after-party’

Divine Proportions reimagines the story of the God (and sometimes Goddess) of theatre, dance and ritual ecstasy. Guests should prepare to be led on a journey to heaven and back, by your mercurial host Dionysus, along with a cohort of cult priestesses; a cavorting band of circus sirens and party starters. 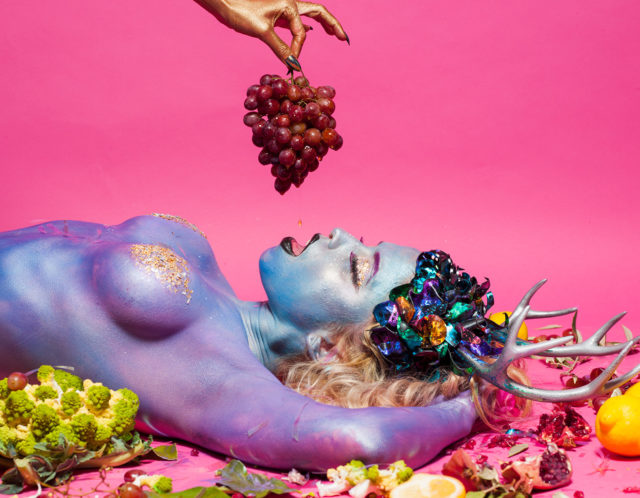 Divine Proportions is produced by Shotgun Carousel, said to be one of London’s most exciting new production companies. The multi-disciplinary performance collective is renowned for working down to the finest detail in its character, creature, costume and set design. Produced by immersive party creator Laura Drake Chambers and designed by immersive theatre expert Samuel Wyer (Alice Underground, The Twits) and directed by co-founder and director of Pecs: The Drag King Collective Celine Lowenthal, Divine Proportions promises to be an evening fit for Gods and Goddesses.
Guests will be led on an immersive journey through secret glittering tunnels, hidden doors and fragrant, floral corridors by their mercurial host Dionysus, and into a paradise of indulgence and entertainment. Ascending into the heart of heaven on earth, guests will be served five courses of heavenly cuisine. The menu takes inspiration from Greek mythology and rustic Mediterranean fair, with each specially-curated course reflecting a key figure from the myths of Ancient Greece. As the guests dine, the bacchanal will continue around them with a wild, kitsch and raunchy cabaret show featuring cameo appearances from other members of Mount Olympus, Persephone, Aphrodite and Eros to name a few.n

Following dinner, guests will be transported to the depths of The Underworld. Upon entering, they will be greeted with cocktails and wine punch by Dionysus’ loyal followers and invited to indulge in a Dionysian disco atmosphere as they party like the God of Wine and Revelry.
The cast is made up of some of the most exciting names in contemporary theatre and cabaret. Former Roundhouse Resident Artists Helen White and East 15 Acting School graduate Leah Kirby will share the role of Dionysus, both having recently had successful shows at Edinburgh Fringe and performed at Soho Theatre, The National Theatre’s River Stage and Lyric Hammersmith amongst others.  The roles of Aphrodite and Persephone will be held by the award winning theatre-maker, writer, cabaret artist and goth Molly Beth Morossa and multi talented cabaret artist and award nominated showgirl Charlie Bouquett. The Maenads will be played by Rosy Pendlebury, Dajana Trtanj, Alana Bloom and Porscha Bennett-Skepple.
Looking ahead to September, Laura Drake Chambers, Founder and Creative Director of Shotgun Carousel and Creative Producer of Divine Proportions, said: “The world of Divine Proportions is the inclusive utopia we all dream of, and whilst the world still remains mythological, we’ll keep working our butts off to bring our dreamworld to life. It’s raunchy, sexy, unapologetically loud and if our audiences have as much fun experiencing this show as we’ve had creating it, we’ll have done Dionysus proud”.
For more information please visit thevaults.london/divine-proportions